With his friends' lives constantly on the line, the Ministry of Magic doubting his story about You-Know-Who's return and the wizarding world on the brink of war, will Harry Potter (Daniel Radcliffe) be able to handle the pressure, along with the angst, romance and bullying in any teenager's life? "Harry Potter and the Order of the Phoenix," the fifth installment of J.K. Rowling's magical series, is sure to dazzle the eyes at the cinemas. Though spectacular special effects and heartrending acting cannot cover up the lack of dialogue and over-simplified plot, "Phoenix" takes a serious turn for the series and is a valuable addition to the seven-installment set. 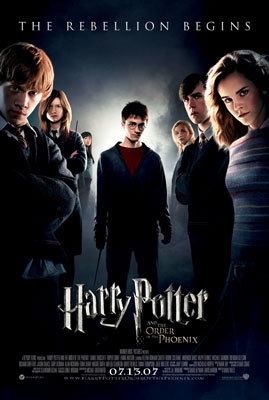 After Harry's already repulsive summer vacation is further spoiled by an attack from dementors - the guards of the wizard prison – and a near-expulsion, the boy wizard's life is turned upside down. Back at Hogwarts, Harry finds himself an outcast for claiming that the evil Lord Voldemort (Ralph Fiennes) has returned. To add on to his problems, Harry's supportive mentor and role model, Albus Dumbledore (Michael Gambon) avoids him. Because of these social issues, the film mainly deals with Harry's inner turmoil and solitude, until the action-packed final half-hour.

Insufficient conversation that only touches on key points of the plot – Ginny (Bonnie Wright) practically has no lines and much of what Hermione (Emma Watson) and Ron (Rupert Grint) say do not further the plot – means that there are plenty of scenes where Harry is by himself, emphasizing his loneliness and emotional chaos.

Other supporting characters, such as Professors McGonagall (Magie Smith), Trelawney (Emma Thompson) and Snape (Alan Rickman), who were important in the previous movies, were sidestepped to allow Professor Dolores Umbridge (Imelda Staunton) to take center stage. Her frilly pink sweater and sweet smile conceal a heart blacker than night. However, director David Yates appears to have taken the new Defense Against the Dark Arts teacher as a joke; light-hearted music seems always to be accompanying Staunton on-screen. Though this interpretation of Umbridge differs drastically from the book, it provides fitting comic relief for the rest of the movie, which remains dismal and dark in nature.

The other new star actress in the film, Evanna Lynch, plays spacey Luna Lovegood. Luna seems to be the only character besides Harry's godfather Sirius Black (Gary Oldman) who manages to get through to the stubborn teenager. Sweet, extremely naïve and surprisingly wise, she proves to be one of the more complex and inspirational characters in the movie and stays true to the book.

However, the long-anticipated romance between Harry and Cho is bitterly disappointing. Some subtle flirting and a kiss under the mistletoe is pretty much the extent of the relationship. More interesting were Ginny's furtive but obviously jealous glances at Harry and Cho, anticipating the romance in "Harry Potter and the Half-Blood Prince."

Fortunately, special effects help make up for some of the scripting pitfalls. Though very different from those found in the book, they help "Phoenix" stand alone as a movie instead of just a book illustration using borrowed creativity.

Perhaps the main problem with "Phoenix" is the simple impossibility of crunching an 870 page book into a two-hour movie. When someone reads Harry Potter, the magic flows through the book's ability to give special characters very typical problems, including unfinished homework and inability to talk to girls without stuttering. The magic is squeezed out when all these minor details are ripped out of the movie, and fans of the book will especially miss the wizard games of "Quidditch."

Nevertheless, "Phoenix" does very well in interpreting the book's complexity, as it is the shortest movie of the series so far. Fluid acting and stunning sequences make the movie an excellent precursor to the much-awaited final book. But, the handful of viewers out there who have not read the series may want to do so, or risk getting lost in the mind-blowing action and the plot's twists and turns that make "Harry Potter and the Order of the Phoenix" what it is.