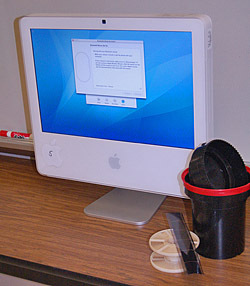 Traditional photographic processes using chemicals, foreground, are being replaced at Blair by digital cameras and computers with photo-editing software. Photo by Andrea Lynn.

The photography curriculum will discontinue film instruction and will focus exclusively on digital technology beginning next year because of difficulty acquiring film supplies.

Blair is the first school in the county to update its photography equipment and curriculum, said photography teacher Franklin Stallings.

Students began this year learning about traditional film photography and will make a transition to digital technology. Next year, students will not learn film photography at all. The traditional "wet" photography techniques in the curriculum, like burning and dodging in the darkroom to adjust a photograph's contrast, will be replaced with lessons on how to process photographs electronically using digital editing software like Adobe Photoshop.

To prepare for the increased emphasis on digital processing and editing, Blair has purchased 16 new Apple computers equipped with editing software, in addition to 14 digital cameras, a scanner and a photo printer.

Stallings made the decision to stop teaching film photography after he noticed a trend in the industry toward digital technology. Two years ago, Kodak stopped making black-and-white photo paper, and Nikon and Canon stopped producing film cameras last year. "Everything in the industry is going digital," Stallings said.

The rising cost of film - a 30 percent jump this year – became too much for the photography budget to cover. Student lab fees would have increased to the point where some students would not have been able to afford to take the class, said Stallings.

The Montgomery County Department of Enriched and Innovative Programs (MCDEIP) provided funds for the new photo equipment. Dee Durbin, a fiscal assistant for the department, said that all schools in the Downcounty Consortium with academies have been given $40,000 each year since 2005.

In addition to their $40,000 annual budget, schools can apply for more funding. Blair requested and received the $35,759.70 from the MCDEIP to purchase the new photo equipment, according to Academies Coordinator Jennifer Kempf.

Despite the versatility of digital equipment, many students are tepid about the change. Sophomore Gloria Rinonos likes working in the darkroom and says film processing as one of her favorite parts of the class. She understands, though, the school's need to make the transition. "I don't think they have any other choice," she said.

Senior Brenna Mork likes digital photography, but thinks the decision to switch entirely to digital next year is too extreme. Mork says she is willing to pay a higher lab fee to help cover the rising costs of film if Blair retains film photography. "I think it's worth it to have both aspects of photography available," she said.

Stallings, too, would prefer to keep teaching film photography while incorporating the new technology. To him, film and digital are simply two different mediums that, if properly used, should yield the same results. "It's like the difference between home cooking and microwave cooking," Stallings said.