Blair players will make it worth your booty

Between their witty banter, over-the-top story lines and outrageous humor, Gilbert and Sullivan had "high-school-production" written all over their work. And good thing director Kelly O'Connor scooped the opportunity right up; with the hilarious "Pirates of Penzance," she, along with the cast and crew, nailed it all. Hurrah, hurrah!

"Pirates" follows young Frederic (senior Diego Ardila), who is meant to be celebrating his 21st and final year of apprenticeship as a pilot. Sadly, his dear hard-of-hearing nursemaid Ruth mistakenly raised him instead as a pirate (hey, the two words share a couple of letters), and soon reveals that, because he was born on a leap day of a leap year, poor Fredric is only five years old and is therefore bound to his apprenticeship until his 21st birthday. 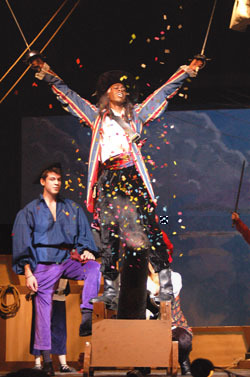 Photo: Malcolm Foley takes the stage with his swaggering Pirate King during today's teasers for the upcoming spring musical.

Photo: Malcolm Foley takes the stage with his swaggering Pirate King during today's teasers for the upcoming spring musical.

This isn't Ruth's only gaff – she nearly convinces the much younger Fredric to marry her, and Frederic, who has no one to compare to Ruth, comes close to taking her up on the offer. That is, until he meets Mabel (senior Karen Biddle), daughter of the Major General Stanley (sophomore Russell Ottalini), who sweeps Frederic off his feet and dares him to choose between her love and his duty to fulfill his apprenticeship as a pirate.

Voices this year were a forte, and in all the right places. New faces like juniors Francesca Blume (Ruth) and Zack Pinsky (the Second Lieutenant), and senior Leandra Tidwell (Daughter Edith) gave the show a fresh feel with impressive vocals and strong stage presence for more minor characters.

But the mind-blowing performance of the night came from senior Karen Biddle (Mabel) who left us all scratching our heads and thinking where has she been all these years? With pitch-perfect accuracy and a voice that could land her in the Washington National Opera next month, Biddle is like the unexpected meteor that'll knock you over and dominate the stage – while hitting all the right notes of all those off-the-clef arias.

That's not to say that she puts other voices to shame – Ardila makes a convincing Frederic with an impressive range, much energy and the enunciation that is so easily lost in these operettas. And let us not forget The Pirate King – junior Malcolm Foley – whose laugh-out-loud performance, beaded hair and feathered hat brings Captain Jack Sparrow to mind, while sophomore Adam Jackson leads the foosball-esque police force with fine projection and, of course, silly dance moves.

Really though, the whole cast deserves a hearty pat on the back for the vocal work in the production; from Ottalini's 2007 rendition of "I Am the Very Model of a Modern Major-General" to the wonderfully ditsy ensemble performances of General Stanley's twenty-something daughters, the show lacks any sort of misfires here.

The musical would be nothing without the pit orchestra, conducted this year by Michelle Roberts, which is especially good this time. Everything is there – a happy balance between vocal and instrumental dynamics, a bombastic overture (albeit two minutes too long) and perfect synchronization with the memorable musical selections. Strings are particularly strong as tempo increases, horns don't overdo it, and junior Chao Xue's solo performance on oboe is certainly notable.

Pirate hats off to members of stage crew and set design whose ever-changing set this year is the best Blair has seen in four years. Roman statues, an exploding cannon and a giant masthead will make you feel like you're walking the plank yourself, while huge boulders and bright colors make the perfect backdrop for the lovely maidens.

Costumes are as good as the set; from the beautiful dresses of the General's daughters (down to the matching outfits for freshman twins Julia and Rose Wynn), to the Pirate King's feathered cap and bandit gear.

Operettas are risky productions to put on in a high school setting. But this year the Blair players have rolled up their puffy pirate sleeves and taken it head-on for what is arrr-guably the best musical performance Blair has ever seen.