Fillmore Music Hall, designed as a three-floor music venue with a performance space and seating for community events, will be constructed this October by the intersection of Colesville Road and Georgia Ave. in Downtown Silver Spring. Lee Development Group (LDG), a local family-run real estate asset management company, donated the property to Montgomery County to enhance the entertainment scene in the downtown area, according to LDG President Bruce Lee. 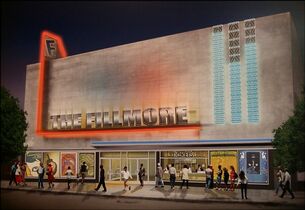 Photo: With two performance areas and a standing capacity of 2,000 people, Fillmore Music Hall is expected to bring a vibrant music scene to the arts and entertainment district of Downtown Silver Spring.

Photo: With two performance areas and a standing capacity of 2,000 people, Fillmore Music Hall is expected to bring a vibrant music scene to the arts and entertainment district of Downtown Silver Spring.

After receiving the land, Montgomery County initiated a lease with the world's largest concert promoter, Live Nation Inc., to create the first sizeable music club in Silver Spring. "What's exciting is that the county and private sector developed the initiative," Lee said. "The county came up with the idea and we are working with them."

Plans for the construction of Fillmore Music Hall include a first and second floor with space for 2,000 standing spectators and the capacity to hold 500 - 700 seats for other community events, such as business meetings and conferences. A box office, lobby, stage and two bars will occupy the first floor, while balcony seating and two other bar areas will be constructed on the second floor. The basement level will have a lounge space, private offices, a reserved room for performers, restrooms and another performance area.

LDG has scheduled the official opening for September 2011, which is an ambitious agenda, according to Lee. "It's a tight timeframe," he said. "It's aggressive, but obtainable."

Silver Spring Council Member Valerie Ervin agreed that the new music venue will benefit the community. "It's very positive for young people, especially those who want to be brought into the music industry," she said.

Blair senior Brittany Reyes, a concert enthusiast who attends up to five concerts every month, noted that Fillmore has the potential to bring more musical diversity to the area. "Fillmore can definitely bring in a new crowd of fans for artists," she said. "I think that our area has a very rich music scene that isn't always known about, but maybe this can be a chance for it to develop and really come out into the public eye."

Photo: Bruce Lee, President of Lee Development Group, donated the property across the street from the American Film Institute (AFI) for construction of the Fillmore.

Photo: Bruce Lee, President of Lee Development Group, donated the property across the street from the American Film Institute (AFI) for construction of the Fillmore.

The music club is expected to do more than just attract music-lovers and improve the concert scene. Lee estimated that about 100 jobs will be created when the arena opens in 2011 and that the venue will benefit local businesses because concert-goers will be looking for dining options before and after the performance events. "Fillmore will do a lot of good for the restaurant businesses all over the central business district of Silver Spring," Ervin said. "It'll be a very big boost for restaurants and shops in the area."

Some residents are skeptical about the merits of a large-scale performing arts center in the heart of downtown. "People who have contacted us with concerns are concerned about traffic," Ervin said. She mentioned there will be six parking areas surrounding the music hall and that the new entertainment facility will be walking distance for many local residents. There will also be easy access via metro.

Reyes mentioned the close proximity of Fillmore as one of its major advantages. "I think that the location is going to have a big impact on the people who didn't have the opportunity to go to concerts before, or weren't very interested because of the distance they would have to travel," she said.

Despite potential traffic congestion, Ervin sensed that the Silver Spring community fully supports the construction of Fillmore. "Most are very excited about it," she said. Reyes agreed that the accessibility and excitement of the venue would bring local music fans together. "This could create a bigger sense of community among everyone, too, because it would be something everyone would go to on a normal basis," she said. "I am predicting that this music hall will pretty much be my new home."

Lee added that the site will also bring the city into the larger entertainment sphere. "It's great for the music-loving community," he said. "It'll forever put Downtown Silver Spring on the map."