Playing defense in the offensive zone

President Obama has faced harsh criticism from democrats in response to his tax deal with Republicans this week that would extend the Bush tax cuts for two more years. Obama's compromise raises the question of whether he can be a president who cuts effective bipartisan deals or one who sacrifices his fundamental campaign promises in the face of partisan opposition. In the midst of a still tanking economy with fed up Americans, and at a time when a major congressional turnover is just days away, it is dangerous for Obama to play defense when he should be on offense. 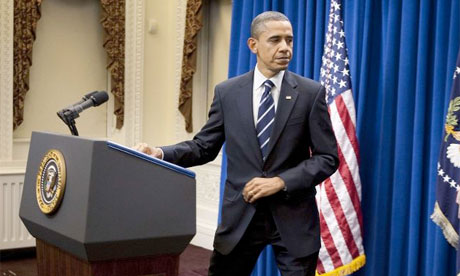 Photo: Obama issued a statement on his tax compromise on Monday, Dec. 6.

Photo: Obama issued a statement on his tax compromise on Monday, Dec. 6.

The agreement has clear democratic gains, such as extending long-term unemployment benefits for 13 months, as well as granting a one year payroll tax holiday that would encourage business to hire more Americans. In fact, the Obama administration says that the package could strongly stimulate the economy, adding an extra $300 million to the economy.

Most importantly, the package will extend the Bush tax cuts, set to expire at the end of the month, for another two years, which would cut taxes for Americans making over $250,000 per year, and increase the deficit by a whopping $900 billion. In future years, a wider budget deficit and a Republican-dominated House could result in cuts to other important government programs. Senator Bernard Sanders (I-Vt) is planning to fight the legislation through filibuster when the bill comes up in the Senate.

In the House of Representatives where nearly one hundred Democrats lost their seats in the last election after repeatedly going out on a limb for President Obama, the sense of anger and betrayal is even greater. The House passed over 400 pieces of Obama supported legislation that were left to die in the democratically controlled Senate. It was thus unsurprising that when Vice President Bidenpresented Obama's deal, which backs down from his most fundamental tax promise of his campaign, he was met not only with anger but also with widely reported obscenities.

Obama defended his decision with the justification that tax cuts for the middle class and extension of unemployment was the top priority ensured through the deal and that given the results of the midterm elections, it was the best he could do. But democrats argue that Obama could have taken a stand against Republicans who have vowed to govern for the purpose of kicking him out of office. Obama could have let the Republicans endure the anger of the American people if they replaced unemployment benefits with tax cuts for the highest earners.

The question of whether Obama can be a fighter and/or strike good bipartisan deals is definitely in question as he loses the respect of Congressional Democrats and many others throughout the country. He will need to fight to rally democrats and Republicans alike, so that he can ultimately fulfill his promises for the increasingly discouraged American people.