Seven-time Cy Young Award winner Roger "The Rocket" Clemens had one goal in mind as he walked into a congressional hearing in February 2008. He was determined to clear his name after being accused of using steroids and human growth hormone (HGH) in the "Mitchell Report," former senator George Mitchell's account of steroid use in Major League Baseball (MLB). 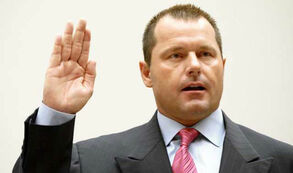 Photo: Roger Clemens was indicted for lying to Congress about using steroids.

Photo: Roger Clemens was indicted for lying to Congress about using steroids.

Clemens was not under subpoena when he testified to a House committee in 2008. He chose to speak in hopes of invalidating accusations against him. "Let me be clear. I have never taken steroids or HGH," Clemens said.

However, Clemens' plan backfired. On Aug. 19 a federal grand jury indicted Clemens for allegedly lying to Congress when he denied using steroids and HGH. Clemens' six-count indictment includes charges of perjury and obstruction, according to ESPN.com. Still, Clemens maintains that he did not lie.

Even confessions from the 2008 hearings from former teammate Andy Pettitte, who testified that Clemens had used HGH, and from former trainer Brian McNamee, who claimed he injected Clemens with steroids and HGH more than 12 times between 1998 and 2001, could not shake Clemens.

As the evidence piled up against him, Clemens insisted that he told the truth. He communicated with the public through Twitter. "I never took HGH or Steroids. And I did not lie to Congress," he wrote. "I look forward to challenging the Governments [sic] accusations and hope people will keep an open mind until trial." Now scheduled to be arraigned on Monday, Aug. 30, Clemens faces up to 30 years in prison, as well as a $1.5 million fine, according to the Associated Press. But under U.S. sentencing guidelines it is likely that Clemens will only be required to serve 15 - 20 months if convicted on all charges.

Clemens is certainly not the first MLB player in recent years to be indicted for lying to Congress. Barry Bonds is scheduled to appear in court in March for lying to a federal grand jury about knowingly using performance enhancing drugs. In addition, Mark McGwire confessed to using steroids this January.

As so many professional athletes are being linked to steroid use, it is becoming harder and harder to remember a time when steroid use was unheard of in sports. It's unfortunate that some of the nation's greatest athletes have admitted to using steroids and even worse that these athletes are expected to be sources of inspiration for future generations of athletes.

Clemens' scandal is a reminder of the modern-day sports world in which we live - one in which the discovery of steroid use is no longer shocking but rather something that is simply buzzed about and then dismissed. If Congress does not pursue Clemens, it would imply that the government has no concern for illegal behavior among professional athletes. It is now up to Congress to prevent us from entering a future in sports that is further stained by drug use, secrets and dishonesty.