Long gone are the days of greasy Chinese food served in white take-out boxes. With a sizable Asian population, Montgomery County has many authentic Chinese restaurants, all with menus that go beyond the typical General Tao's chicken or mooshu pork. Nestled behind the Gaithersburg Square Shopping Center is Fu Shing Café, a traditional Chinese restaurant that serves up tasty authentic dishes but is plagued with sub par service. 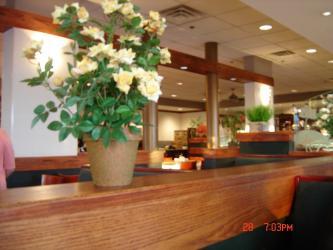 The enormous menu at Fu Shing contains the typical Americanized dishes such as lemon chicken or beef with broccoli, but a second glance reveals traditional Chinese fare like smoked duck from Szechuan Province. The smoked duck comes with eight steamed lotus buns and a bowl of hoisin sauce, all arranged beautifully on a bed of crispy green scallions. Smoked over tea leaves and rubbed with various herbs, the duck arrives uncharacteristically but deliciously crispy. When sandwiched between the soft lotus buns, the meat is slightly dry but still tasty.

The minced shrimp and chicken is another traditional dish offered with a twist; it comes with four leaves of lettuce to wrap around the chicken. This incredibly messy entree must be approached with caution as the chicken and shrimp pieces often fall out of the wrapping. But the mix of the three ingredients is a match made in heaven. The crispy lettuce balances out the tender pieces of shrimp and chicken, which are sautéed to perfection with slivers of chives.

Although meat-themed dishes at Fu Shing Café are easily the most impressive, the fish dishes are still well above average. The salted fish and tofu hot pot is a wonderful blend of tender fish, fried tofu, slices of chicken and chives served in a gorgeous stone pot. The usually bland and tasteless tofu successfully absorbs the powerful flavor of the salted fish and the chives. Unfortunately, too many pieces of fish overpower other ingredients like the chicken, making the whole dish too salty, but the dish is much better when paired with the complimentary white rice. 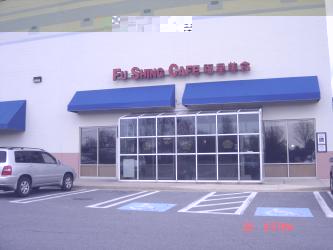 Photo: The Fu Shing Cafe is situated behind the Gaithersburg Square Shopping Center.

Photo: The Fu Shing Cafe is situated behind the Gaithersburg Square Shopping Center.

Outside of the meat and fish categories, Fu Shing Café offers around 20 vegetarian dishes, including appetizers such as the stereotypical egg roll, but none of them particularly stand out. Vegetarian options range from the vegetable lo mein to the eggplant in garlic sauce. Most of the dishes in this category are commonplace and can be found in any Chinese restaurant.

Regrettably, the service does not meet the restaurant's exceptional food standard. The service was decent in only two instances – when a waiter brought over a pot of Oolong tea served in a beautiful teapot upon arrival and when the dishes arrived within 10 minutes. Otherwise, the waiters were non-existent. Patrons order by walking to the counter, telling the cashier their orders and paying directly for the dishes. In addition, it took many attempts to flag down a waiter for a tea refill. Waiters never check on patrons and are expressionless other than the occasional polite smile.

Surprisingly, the ambiance is much better than the service. With wooden beams and wooden booths, the decorative theme and the elegant ornaments strike a harmonious balance. Each wall is composed of either mirrors or windows and overall, the lighting is cheerful and the décor tasteful. Despite the close proximity of tables, the noise level is low, preventing a stuffy atmosphere.

Perhaps because of the almost nonexistent service, the prices are lower than expected, especially considering the quality of the food. The most expensive meat entrée comes at $13.99, but most dishes are around $11. Seafood is more expensive, with dishes ranging from $11.99 to $23.99, but the average price is around $14 or $15. Vegetables options are the cheapest with prices that range from $1.99 to $10.99. Despite the high prices, the exceptional food is worth every penny and the restaurant worth every visit.