Leaks may be part of larger maintenance problem

Leaks sprung from the ceiling in room 164 on Nov. 7 and Nov. 9. According to US History teacher George Vlasits, who uses room 164, the ceiling leaks are a recurring problem that Blair administration is not handling well.

The first leak, which began dripping during Vlasits' class a few weeks ago, "smelled like sewage," according to 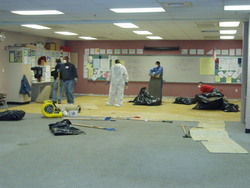 Photo: Building service workers strip the carpeting in room 157 after school on Nov. 10. The carpeting had to be removed because the plumbing leaks caused damage.

Photo: Building service workers strip the carpeting in room 157 after school on Nov. 10. The carpeting had to be removed because the plumbing leaks caused damage.

Vlasits. The class dealt with the problem by putting a trash can under the source of the leak. Vlasits said it took three or four days to repair the initial leak.

According to Vlasits, a plumber determined that the second leak was the result of a stuffed toilet overflowing. Vlasits is supposed to have his room back today but said, "I don't believe it."

Building service worker Anthony Mitchell, the first custodian to clean the room, said the situation "is bad, [and] it's getting worse."

Vlasits said the problem extended beyond the leaks, which he says have been occurring on and off for seven years. He says that in addition to bathroom leakage, his classroom has problems with ventilation and heating and has a faulty emergency light.

Mitchell does not know what to do about the situation. He said he has no avenue of filing a complaint. Nobody [does] anything around here except get paid," he said. "We need new leaders."

Vlasits feels the problems have not been adequately addressed. "The people who are supposed to fix it won't fix it," he says. Mitchell affirmed that the problem has not been dealt with appropriately. Instead, Mitchell said, the later building services shift has been stuck with cleaning up the mess. Mitchell is unsure as to why, but he says the source of the problem, a pipe, has not been fixed. "I don't know why they're not doing anything about it," said Mitchell.

Vlasits is increasingly frustrated by the entire situation. "Fed up is the mildest thing I could possibly say," he stated. Vlasits is not alone. As a result of the leaks, ninth and tenth grade CAP teachers advised their students to call the Board of Education about the problem.

Vlasits is unsure how to solve the problem. "There are those of us who think we should call the health department," he said.