Lights illuminate the stage decorated by a painted purple curtain opening to a painted starry sky. A woman is standing in the foreground, one hand covered by a long black glove, clasping a microphone while the other hand rests by her side. Her shoulders carry a black feather boa embellished by blue glitter strands. Her dress is black and strapless, revealing a bare neck decorated with a diamond necklace. Three men are seated in the corners and back of the stage; one at a grand piano, another on the bass and the third on the drums. Blair CAP and SPARC teacher Pamela Bryant's face shines as she smiles, about to perform "Route 66," her first song of the night at the Fifteenth Annual East Coast Jazz Festival, held Feb. 16 through Feb. 20 at the Doubletree Hotel in Rockville.

Bryant's melodious voice is upbeat and the tune is catchy, engaging the audience. Bryant moves about the stage as she continues to sing, slowly becoming more comfortable in the spotlight and relaxing into another smile.

It is a Friday night and for Bryant, the day would normally have been a school day, if she were not preparing for the event. Like many other teachers, she has found time to exercise her passion for the arts outside of school. 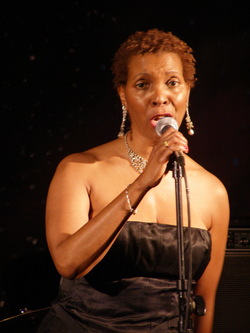 In August it will be four years since Bryant's first performance at the Twins Jazz Lounge in D.C. Since this was her first performance, Bryant was not yet experienced and comfortable on stage. Her voice was soft toned and she closed her eyes to concentrate in every song. "I sang five songs and sang all five with eyes closed," says Bryant. Bryant explains that as singers become more experienced, they learn to keep their eyes open throughout each song.

Unlike Bryant, who began singing as an adult, social studies teacher David Swaney began playing the violin when he was about eight years old. His family was very musical; his father was a cellist, his mom a violist and his sister a violinist. "I had to play the violin to finish the family string quartet," Swaney says. Together, his family played for weddings, funerals and other events. Swaney has been playing the violin since then, except for two and a half years when he was in the Peace Corps. When he was young, Swaney continued playing the violin because of his love for the instrument. "I enjoyed it. My friends were in music, so it was social and it was fun and I was getting better," he says.

Piano, music theory and Fine Arts Resource teacher Sara Josey has been singing for as long as she can remember. When she was young, Josey sang in her church choir and then in the choir at Williamsport High School. At her school, almost everyone was involved in either the choir or band. "It's just what you did," Josey says. Like Swaney, Josey grew up in a setting that celebrated the arts, which encouraged her to continue singing.

As Josey and Swaney moved into their adult years, they expanded their hobbies. Josey met her husband in the Maryland college choir. They traveled to England where they made several recordings with the Lyndon Symphony Orchestra Chorus during the late 1970s. Since then, Josey has remained in her church choir and she and her husband sing in the Resident Choir at Strathmore Hall.

Swaney now plays violin for the Pan American Orchestra and is also a member of a quartet of teachers, including creative writing teacher Val Josenhans, that plays for various events, including funerals, graduations and other ceremonies.

A balance of two worlds

While teaching is the primary career for Bryant, Josey and Swaney, their hobbies outside of school demand their time as well. They have to learn to apply time management skills to be able to balance everything they do. For Swaney, playing the violin has been a time struggle with teaching. "I wish I had more time for music, but it helps keep me sane," he says. When there is a concert, Swaney allots more time for practice. When there are no concerts coming up, Swaney may go two months without picking up the violin. After each hiatus, he has to practice even longer to catch up to where he used to be. Even after playing for so long, Swaney feels that he still improves. "When I'm playing a lot, I still feel like I get better, even at my age," he says.

Bryant also struggles with time constraints, and she practices her singing while driving to work in the morning. She listens to the tapes of song recordings to practice her pitch and memorize the words of the song.

Growing into the hobby

Swaney believes that playing an instrument now as opposed to when he was a child is beneficial because of the positive difference in motivation. "I do it for my own sheer enjoyment now, purely. No one is making me play the violin as an adult. I get to choose whether I want to play every single time I pick up the violin," Swaney says. Swaney also adds that as an adult, he is not forced by his parents to play an instrument as many younger kids are.

Since Bryant's career as a jazz singer is fairly new, she has many goals for the future of her hobby. "I consider myself still emerging and still learning," Bryant says. Her fantasy is to sing at Martha's Vineyard in the summer and she also anticipates making a self-published CD, as well as singing at the Jazz Festival again.

After her performance last week, Bryant received positive feedback and congratulations. Unlike her first performance, Bryant felt very relaxed on stage and achieved her goal of simply enjoying the evening. "I made it my goal for my audience to have fun and for me to have fun," she says.

Meaghan Mallari. Meaghan Mallari is a CAP junior at Blair and resides in Takoma Park. In her free time she plays piano and soccer and is currently an independent girl scout. She loves to run and loves spending time outdoors relaxing in the shade and calm breeze. ... More »