On May 18, four Montgomery County students, including Blair senior Brenna Levitan, were arrested at a lie-in protest at Speaker Paul Ryan's office. Each person was charged with "crowding, obstructing, or incommoding" according to the Huffington Post.

In response to the Santa Fe, Texas school shooting, eight students, who are members of MoCo Students for Gun Control led by Levitan, held a lie-in protest in the hallway in front of Ryan's office. Levitan organized this protest through text to avoid police interference. "We decided to do a lie-in, because Speaker Ryan won't listen to anyone - constituent or not - and what he is doing [not allowing the vote] is affecting everyone around the country," Levitan said.

A video was posted to the MoCo Students for Gun Control twitter which showed Capitol Police officers telling the students that the speaker was not present in the office and warning them that they would be arrested if they did not comply by leaving the premises. Part of the group left, but the four, including Levitan, stayed. They were arrested by the Capitol police, had their hands fastened with zip-ties and were taken to the Sixth District Precinct Juvenile Center in DC. 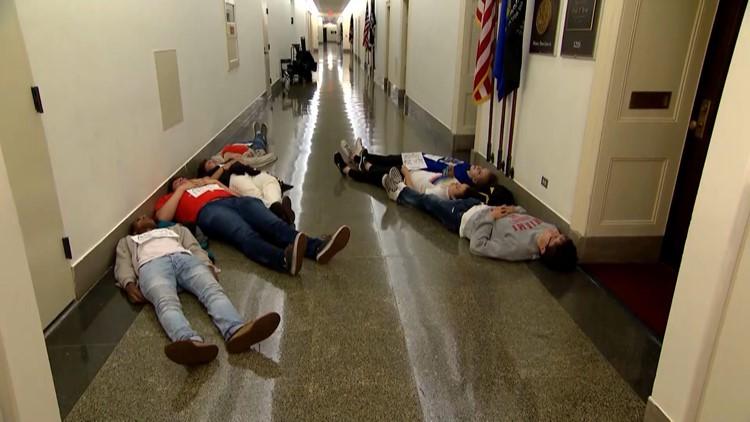 In an interview with Teen Vogue, Levitan recalled her experience stating that the van ride to the jail was "probably one of the worst parts. The zip ties were really painful, and our wrists were pressed between our backs." The officers confiscated the teens' belongings and held them for several hours in the cell.The four were released a day after they were charged. Levitan is now out of jail and has made multiple statements about the incident on twitter. "When is enough? @SpeakerRyan ALLOW THE VOTE #AllowTheVote," she posted, regarding a vote on expanding universal background checks. The hashtag spread on Twitter catching the attention of Stoneman Douglas students and protesters, including David Hogg and Emma Gonzalez. Hogg tweeted, "I love these kids," referring to the student activists, "almost as much as @SpeakerRyan loves arresting students practicing their First Amendment rights to peacefully protest." Gonzalez tweeted, "My girl @brenbizou [Levitan's twitter] is in there u GO BRENNA."