The Blair Pom Squad won the second-place team award, the third-place captain award and the spirit award at the MCPS Pompon Championship competition held today in the Blair gymnasium. Blair competed against six other Division II schools at the competition, which began at 9:30 a.m. 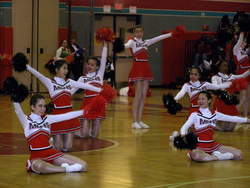 Blair's Pom Squad was the third group to compete, following the Springbrook and Bethesda-Chevy Chase high school squads. Blair's routine featured the songs "Chopsuey" by System of a Down, "Stay Fly" by Three 6 Mafia and "This is How a Heart Breaks" by Rob Thomas, for which they formed a heart shape.

Blair senior Captain Hayley Arnold placed third in the captain competition. For this award, judges critiqued dance ability, marching techniques, personality and demonstration of leadership, according to the competition program. Blair has not placed in the captain award since 2004.

Blair cheerleaders and fans filled a section of the gym in support of Poms. The cheerleaders led many of the same cheers they do at football games while fans participated and continually yelled "Go Blair!" People stomped on the bleachers while others sported t-shirts that spelled "Blair" on one side and "Poms!" on the other.