The Blair Pom Squad won the third-place team award and third-place captain award at an invitational Liberty Belle Competition held at Magruder High School on Jan. 13. Blair competed against five other high schools at the competition, which began at 12 p.m.

Blair's squad, among the larger sized teams, performed third after Wheaton and Springbrook High School. The routine included songs such as "Rompe" by Daddy Yankee, "Walk it Out" by DJ UNK and "Call Me When You're Sober" by Evanescence. The routine was also composed of more difficult turning and jumping techniques such as fouettes, c-jumps and axels to earn more points from the judges. 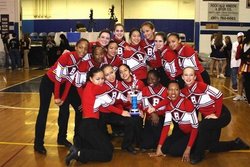 Senior Zoe Bell placed third in the captain competition, an award she did not expect to receive. The Pom Squad was still learning the routine the week leading up to the competition, Bell said, so winning both awards was unexpected. "I was really surprised. I didn't expect to place, because I had almost no time to prepare for my captain's routine. But I was really excited," Bell said.

Placing third without a solid routine gives Bell hopes that, with more practice, the team will place higher at future competitions, she said. The Squad will continue to practice and polish the routine for the next invitational competition, which will be held at Blake High School on Feb. 3. The County Competition will take place in Blair's gymnasium the following week, on Feb. 10.