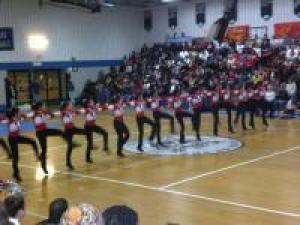 Each squad began their routine with a brief marching introduction accompanied by their school's drumline.

The Paint Branch Pantherettes, who always provide tough opposition for other squads, began the competition. They were followed by Wheaton, who gave a relatively sloppy, performance. While the Knights pumped up their crowd by forming "WHS" with their poms and senior captain Karla Saravia gave a strong solo performance at the end of the routine, the majority of Wheaton's presentation was comprised of risk-free dance moves.

Rockville took the floor next, and gave a strong, tight performance that displayed popular dance moves such as the heel toe.

The Blazers performed fourth at the competition, and their dance routine was made up entirely of songs pertaining to the theme of cars. Senior captain Elsi Wu enthusiastically led the squad in a fast-paced, upbeat display set to such songs as Rihanna's "Shut Up and Drive," Snow Patrol's "Chasing Cars," Danity Kane's "Show Stoppin'" and Nelly's "Ride Wit Me." The Blazers' overall performance was consistently exciting, comprised of sharp kicklines, axel turns and pirouettes. Though the routine's choreography was quick, creative and attention-grabbing, the team suffered a significant loss of points in the "group execution" and "technical" categories.

According to Wu, the Blazers were tied with third-place Gaithersburg in the "choreography" category, and trailed fourth-place Rockville by two points and second-place Good Counsel by six points. These numbers reflect that the majority of the squad's points were lost because of poor technique and execution. In terms of choreography, however, the Blazers were comparable to the strongest squads. Poms coach Gwen Thomas confirmed this, stating, "I was happy with the actual choreography of the routine. We really need to work on the execution, however. It's a fast routine, and a lot of the girls got tired."

While the speed of their performance may have been somewhat detrimental to Blair's overall final score, Wu has always found the excitement and pace of a routine to be very important. "Slow, boring routines aren't enjoyable. I really don't want to compromise the speed of our routine—we need to find a happy medium between speed and accuracy," says Wu.

Wu also cites inexperience as a possible contributing factor to Blair's disheartening end result. "This was the first competition of the season," says Wu, "and we're dealing with a very different dynamic from other years because we have a new coach and a lot of new girls, which is something the team hasn't dealt with in recent history."

The third-place Gaithersburg Trojans followed the Blazers, dancing to a music compilation related to the theme "believe." The squad executed synchronized leaps and toe-touches to songs such as Journey's "Don't Stop Believin'" and EMF's "Unbelievable."

Kennedy, Good Counsel, Springbrook, B-CC and Northwood followed the Trojans, with particularly memorable performances by Good Counsel and B-CC. The Good Counsel Falcons' routine was comprised of perhaps the most technically difficult dance moves of any squad and the B-CC Barons wowed the crowed with exciting high-kick and split combinations.

Northwest provided a powerful conclusion to the lengthy competition, perfectly mastering all components of their routine. Like Gaithersburg, Northwest's performance was made up entirely of songs pertaining to the theme of dreams. The Jaguars' kicklines were especially noteworthy, which combined with the other flawless aspects of the performance for a decisive first-place victory.

While seventh place was a disappointing result for the Blazers, Wu notes that the Blake competition was an overall positive experience that will undoubtedly help them prepare for the county competition. At counties, Blair will be competing against Wheaton, Gaithersburg, Kennedy, Springbrook, B-CC, Northwood and Clarksburg, a lineup that does not include three of the four strongest performers at today's competition.

"This was a great opportunity for us to get feedback from judges on what we need to improve upon to really make an impression at counties," concludes Wu. "We sized up well against our future competition so it should hopefully make for a successful result in February."

Editor's Note: Upon further review of the story, we have deemed our criticism of the Wheaton High School squad overly harsh. Our story has been modified to acknowledge the efforts of the Wheaton poms team, and the other teams throughout the county.