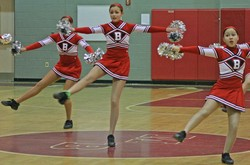 Senior Zoe Bell won the captain award, placing in the captain competition for the third time this season. Bell performed the same routine from previous competitions but polished it during practice. "This past week I've been practicing the routine really hard," Bell said.

For the award, squad captains are judged on dance ability, marching techniques, personality and demonstrated leadership, according to the competition brochure.

Although coach Amy Thomas hoped to improve on Blair's 2nd place finish from last year's county championship, she commended the squad and the intensity with which they performed their routine. "They did the routine better than I've ever seen them do it," Thomas said.

Thomas cited minor mistakes in the routine as the reason for Blair's 2nd place finish. "It wasn't a clean routine. We had some mistakes and Clarksburg didn't have any," Thomas said. 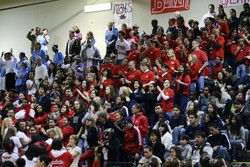 Photo: Supporters of Blair's Pom Squad filled the stands of the gymnasium at the MCPS Pompon Championship competition.

Photo: Supporters of Blair's Pom Squad filled the stands of the gymnasium at the MCPS Pompon Championship competition.