Blair is unable to place in MCPS championship 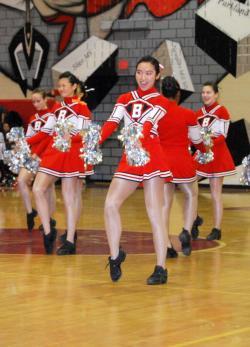 Tran with a plan

Blair's squad performed seventh of the nine teams, following Einstein, Clarksburg, Northwood, B-CC, Gaithersburg and Kennedy. After Blair's performance, Wheaton and Springbrook finished up the competition. Each school's squad performed to a medley of songs relating back to a central theme.

Einstein started the morning off with a loose routine that included an embarrassing collision between two girls and an off-height line that was awkward in their arrival to the floor. The girls had trouble hitting their choreography and were not able to always spot their turns.

Next up was Clarksburg, with the theme of dreams. Their guiding was perfect, and the captain incorporated many ripples and kicks that insured the girls' place.

Northwood, competing with only eight girls, started off rushing through the choreography but ending up too slow in their lines. The captain was faster than the other girls and was often several beats ahead. To add to the damage, as the girls headed to formation at the end of their time, one girl was in the wrong spot and had to rush to her position seconds too late. 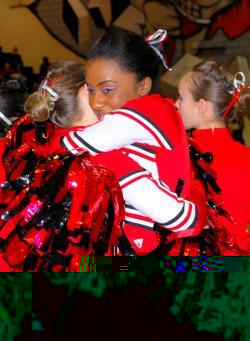 Photo: Poms squad members hug each other for good luck before their performance.

Photo: Poms squad members hug each other for good luck before their performance.

B-CC, the overall winner this year, started before they were even announced to commence. This mishap was covered up later though with an inspired captain's performance, well-timed fouettes and an impressive domino body effect.

Second place winner Gaithersburg was next with a great drum line portion and terrific splits. Their captain, too, performed beautifully, and ended up taking the third place captain's award.

Blair's theme for their performance was cars and interestingly enough, Kennedy's theme was cars also. Kennedy performed right before Blair and used many of the same songs, including "Life is a Highway" and "Route 66." Kennedy's lackluster performance, though, didn't stand up to Blair's, which incorporated numerous intricate variations and a particularly good line formation. Blair's transitions from song to song and from floor to standing were excellent, and the choreography related well back to the theme of cars. The squad worked in many car motions, such as starting up the engine and changing gears, which were popular with the crowd.

After Blair finished, Wheaton came on with a performance that did not do the admirable choreography justice. Their kicks were messy and none of the girls were guiding. The end of the performance, though, was well done when the girls got in a circle on the floor and moved the poms around with their feet in the air. 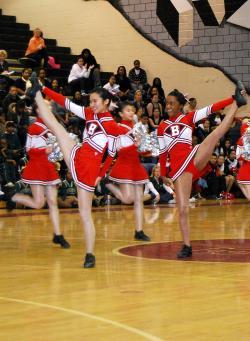 Photo: Poms members hold their legs high in an astounding demonstration of flexibility.

Photo: Poms members hold their legs high in an astounding demonstration of flexibility.

Springbrook finished off the morning with good variation and excellent choreography. The captain, who earned first place captain's award, was a stupendous ballerina and was able to "fouette en dehors" for long periods of time, awing the audience and the judges. A few other girls had additional singular performances while the squad was on the floor, a fairly uncommon practice. Usually just the captain will perform alone.

Last year Blair was able to pick up the spirit award but they were unable to do so this year; Clarksburg's many animated fans helped the school to go home with the spirit award.

The inability to place in the top three was disappointing for the team, but they were satisfied with their effort. "Everyone did their best," said sophomore Rose Wynn. "We put it all out there and gave it all we have. The best won."

According to sophomore Julia Wynn, "[The team] performed better in the last competition. I feel bad for the seniors." Rose Wynn too especially pointed out the efforts of senior captain Elsi Wu. "I'm proud of the whole team," she said.