Pop into the Blair Album Club

In one of the first meetings of the new Blair Album Club, members discuss Kendrick Lamar’s album, “Good Kid, M.A.A.d City.” After a brief overview of the contents of the album, founders NuAmen Audena and Aditya Das move into examining specific tracks and the overarching story the album tells. As they move through the tracklist, some members cut in to point out specific details that others may have missed or share their experiences with the music.

In addition to the larger club conversation, some members share their more personal feelings about the album with small groups of friends. The classroom is overflowing with students, some forced to stand or sit on the floor while finishing their lunch.

Toward the end of the meeting, a QR code is displayed on the presentation that Audena and Das used to guide the discussion. Members scan the code to open a Google Form where they can anonymously give the album a score out of ten, as well as share feedback and favorite tracks. While filling out the form, the volume in the room swells as members debate ratings and favorite tracks. Ultimately, the average club rating of the album is 8.5/10. 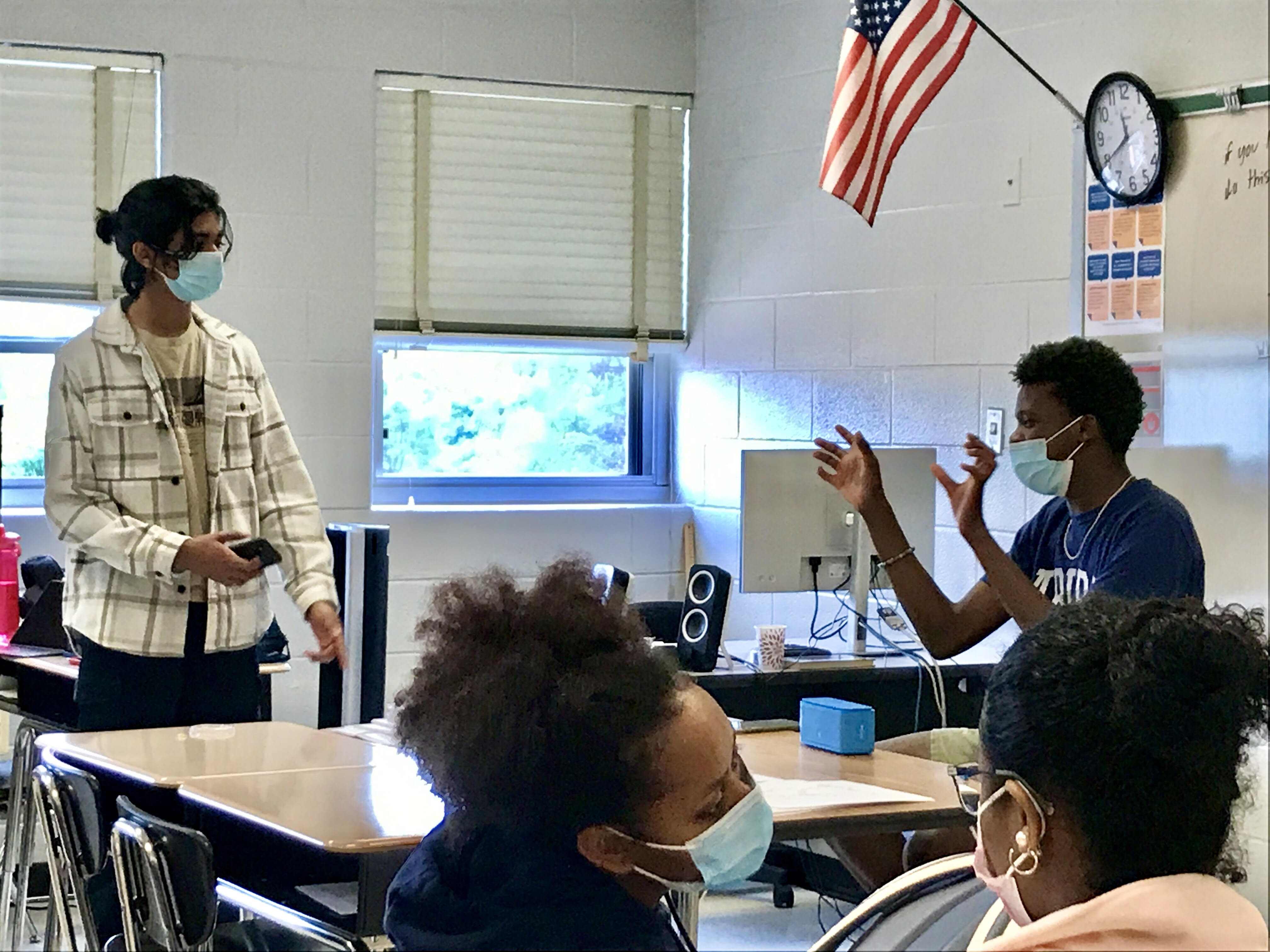 Photo: Club founders, NuAmen Audena and Aditya Das, lead a discussion about Pink Floyd's "The Dark Side of the Moon."

Photo: Club founders, NuAmen Audena and Aditya Das, lead a discussion about Pink Floyd's "The Dark Side of the Moon." Photo courtesy of Hannah Hekhuis.

In preparation for next week’s meeting, members will listen to “The Dark Side of the Moon,” Pink Floyd’s iconic 1973 album.

The Album Club was created by Audena and Das as a space for students to talk about the music they are passionate about. “[With the club,] I just want to emphasize that me and Aditya aren’t experts, but even if you’re not Anthony Fantano you can still learn about and discuss new music,” Audena says.

Before they started the club, Audena and Das often talked about the music they were currently listening to with their friends during lunch and figured that other students may want to do the same. To provide them that opportunity, the Blair Album Club was born.

The club works very similarly to a typical book club. Members meet and decide the album they would like to listen to and return the following week to share their thoughts on the music.

Audena and Das hope to cover a wide range of genres, artists and cultures in the music that the club listens to. From modern to oldies, popular to independent, the club wants to cover it all. However, there are some restrictions.

“If someone suggests a K-Pop or country album, I would be very reluctant to review it,” Audena says. He’s not completely joking, but Audena concedes that one can find great music in every genre, including K-Pop.

On a more serious note, Audena and Das want the music they review in the club to have some kind of depth. It needs to tell some sort of story, tap into a kind of universal emotion or have influenced a genre somehow. “It has to have something interesting or unique that separates it from others,” Das says.

An example would be “To Pimp A Butterfly,” Kendrick Lamar’s 2015 Grammy-winning album, which tackles themes of depression, police brutality and religion. “I would love to discuss ‘To Pimp A Butterfly.’ The themes on that album and the story [are] just so cohesive,” Audena says.

Das would love to introduce some Blazers to Little Simz, a musician and actress whose most recent release “Sometimes I Might Be Introvert,” has received critical acclaim. In addition to the album from Simz, “Charli” by genre-bending pop star Charli XCX is a favorite. “It’s a pop album, but it also has a lot of experimental stuff mixed in... Even with its flaws I think it’s really interesting to discuss,” Das says.

If there is any music Blazers are passionate about, members of the club can suggest albums for the club to listen to through the club’s interest form or DM them on Instagram (@blairalbumclub).

As well as more popular music, the Album Club is also interested in listening to music by musicians in the Blair community. “I don’t really know of any Blair students who make their own music, but if someone does and wants us to listen to it, they can totally DM us on Instagram and the whole club can listen to it together,” Das says.

The purpose of the club is not just to critique music, but to give Blazers a greater appreciation for the music that they may just casually listen to. “I hope the music that we listen to will help students think about music not just in terms of what sounds good but also think about what the artist is trying to say with the music,” Das says.

Pari Shrestha, a sophomore and member of the club, notes how popular the club has become. “It’s really cool to see what kind of music people enjoy and also how they enjoy it. It’s also awesome how much it's grown. I think the turnout has literally doubled since our first meeting.”

The club intends to be a place where Blair students can share the music that they love, meet new people with similar interests and discover new music. “Me and Aditya aren’t music critics... but we want people to realize that you don’t have to be an expert to talk about music. In music, anything goes, you know? That’s what I want people to take away from our club,” Audena says.

The Blair Album Club meets Fridays during lunch in room 261.

Josey Merolli. Hey, I'm Josey (she/her). As well as writing, I love to listen to music and play with my cats. More »