Most albums, including Post Malone's first album Stoney, have their respective strengths, but usually have a few weak songs. However, Beerbongs and Bentleys thrives on its all-around excellence, with every song providing its own unique character. This reveals Post's improvement as an artist, since on Stoney some songs seemed to blend together due to stylistic and topical similarities. But, there is no doubt about what makes the album truly great: Post's masterful vocals. His soothing yet invigorating tones overcome anything that might be lacking in lyrical complexity.

Taking a closer look at each of the tracks, Beerbongs and Bentleys is bookended by two of its best: "Paranoid" and "Sugar Wraith." "Paranoid," as its title suggests, explores how Post's rise to fame and fortune has made him more protective and paranoid of his possessions. The slower pace of the song allows Post's smooth voice to shine. "Sugar Wraith," in contrast, is more upbeat in topic and celebrates his success, and its exciting instrumental makes it a great workout song. Due to its wide variety in musical styles, the album has something for everyone, regardless of their typical music preferences. Luckily, Beerbongs and Bentleys isn't just impressive in its first and final songs; the meat of the album has much to offer. 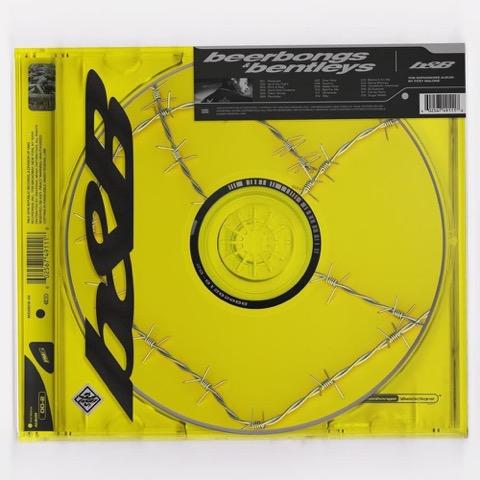 Photo: The album cover of Beerbongs and Bentleys.

The album cover of Beerbongs and Bentleys. Photo courtesy of Courtesy of Genius.

Post Malone continues to attract top talent for his collaborations, which allows his music to appeal to a wider audience. In Stoney he experienced great success by pairing up with Justin Bieber for the song "Déjà Vu," and he builds on this success in Beerbongs and Bentleys. Swae Lee's higher-pitched voice contrasts well with Post's lower tones on "Spoil My Night," and Ty Dolla Sign and 21 Savage's grinding voices contrast with Post's smooth vocals on "Psycho" and "Rockstar," respectively. The inclusion of well-known artists Nicki Minaj, G-Eazy and YG on the album further increases its allure.

"Rockstar" and "Psycho" are arguably the album's most popular songs, having peaked at No.1 and No. 2 on the US Billboard Hot 100, respectively. However, digging deeper into Beerbongs and Bentleys allows listeners to discover gems such as "Candy Paint" and "92 Explorer". "Candy Paint," which is also featured on the soundtrack of The Fate of the Furious, has a simple, calm beat that allows Post to generate a fulfilling melody. "92 Explorer," just like "Sugar Wraith" (refers to Post's white Rolls-Royce Wraith) shows off his love of fancy cars and all of the grand luxuries that have come with fame. These two excellent songs reveal that there is much more to the album than meets the eye.

Although Post's lyrics can occasionally become repetitive, and the topics of his songs can seem similar to other popular hip-hop artists, this is more than made up for by the sheer quality of his music itself. Post's first album Stoney was solid, but his second work Beerbongs and Bentleys is even better. Together, Post Malone's stellar voice, unique beats and style, top-tier features, and the variety of elements he includes on Beerbongs and Bentleys all make the album a must-listen.

Breaking Benjamin is my favourite band of 2000s. Breaking Benjamin had so many hits! The ones I remember are 'The Diary of Jane', 'Tourniquet' and, of course their hit 'So Cold'. These are real songs, not garbage like today! And it is sooo good that Breaking Benjamin have a tour in 2020! And I'm going to visit their concert in 2019. The tour dates is here: <a href=https://breakingbenjaminconcerts.com>Breaking Benjamin tour 2019</a>. Open the page and maybe we can even visit one of the Benjamin's together!