"Chocolate-covered frogs and Hagrid's Hot Cocoa!" a sign advertised in a very crowded basement. A daunting figure stood behind the counter, dressed in an ominous cloak and a painted white face, serving small children clad as wizards, witches, elves and even…You-Know-Who.

The underground room belongs to Politics & Prose, a DC bookstore that hosted a Harry Potter celebration in anticipation of the midnight release of "Harry Potter and the Half-blood Prince," the sixth book in J.K Rowling's popular series.

The party began at 10:30, and included a costume competition, magic show and trivia challenges. Jim Dale's voice reverberated through loudspeakers as he read the final chapters to "Harry Potter and the Order of the Phoenix," the fifth book in the series. 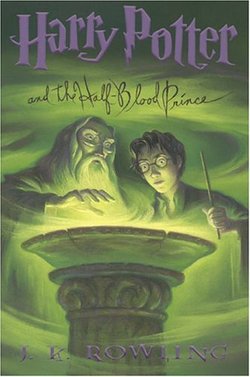 Photo:
Employees at the packed store handed out Harry Potter crossword puzzles for fanatics to busy themselves with before midnight. The bookstore's café hosted servers dressed as various characters, while done-up customers sipped "butterbeer," a beverage Harry Potter himself fancies. Even Bertie Botts' Every Flavored Beans made their rounds through the crowded rooms, receiving suspicious looks from the children who clutched the bags in their hands.

By 11:00 p.m., four lines had materialized, bound by bright pink tape, embracing eager fans of all ages. Everyone in line gripped a beige voucher (ordered in advance), describing the type and quantity of Harry Potter merchandise they would be rushing home with. Audio tapes, CDs and books were available, sealed tightly in large cardboard boxes next to a Politics & Prose employees at the head of each line.

A group of chatty kids from Takoma Elementary exchanged predictions for the forthcoming chapter in the series. "The half-blood prince won't be Harry or Voldemort," one affirmed. "J.K Rowling said so."

Others disagreed. One child described the nasty death Ronald Weasley would suffer, while another reminded him that, Ollivander's, wand seller in the story, spells "Ronald lives" when rearranged.

In fact, an entire website had been put up months in advance, devoted to predictions, clues and foreshadowing in J.K. Rowling's previous Harry Potter books. The website is still up and is entitled The Muggle Net. Plausible couples, events and even deaths are analyzed on the website by "Harry Potter Sleuths" who dissect every word in each novel.

At 11:59 p.m., the official countdown began. The packed store began reciting loudly at ten seconds to go, and applause echoed through the quirky store as the clock struck midnight. The lines began to move, slowly at first, then quite rapidly, as employees flung books at people in line. Instantly, the brand new books were opened, examined for length, and opened to Chapter One: "The Other Minister."

Several miles away, Borders had a similar affair going on, though much less extravagant. Allegedly, J.K. Rowling would make a satellite appearance on a screen at this Silver Spring location and read a small portion of the book to her audience several thousand miles away. Unfortunately, this never went through, and Harry Potter enthusiasts were left to be sorted into a House (Gryffindor, Slytherin, Hufflepuff or Ravenclaw), and put into a long line until midnight.

By 12:30 in the morning, Politics & Prose was emptied as the last few cars drove away with both exhausted and thrilled Harry Potter fans. The buildup was great, the wait was exciting and the party was thrilling. All that's left is the reading.