A Frisbee spins tightly on his index finger while he sits at his desk. Sporting a white lab coat and yellow goggles, Eric Prange then pours 50 ml of hydrochloric acid into a graduated cylinder. 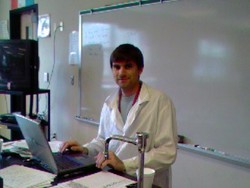 Standing at about 6'2", Prange is Blair's new addition to the chemistry department. He was born just outside of Columbus, Ohio, and then moved to Columbia, Maryland, where, during his early years he had a normal childhood. So normal in fact, it was possibly startling. "All the kids in the neighborhood would joke about how normal my family was, as if we were so normal, it was weird," he says. "They would come to my house and see how normal my mom, dad, and siblings would be together…not to say that it was never interesting, though" he adds.

Prange graduated from Oakland High School in 1996, and then went to the University of Maryland in College Park. However, choosing a career came easily for him. "At around sophomore year, I thought 'what am I going to do with my life'," he says. "Everyone had already chosen a major then, so I chose what I enjoyed." Prange decided to pursue teaching.

After success in tutoring college students for a few semesters, Prange found that he had a knack for chemistry in particular, and teaching seemed to follow his interests. "I knew I liked chemistry…but I didn't want to work in a lab all day long," he says.

To pursue his interest in teaching, he then contacted one of his college friends, who at the time was then teaching high school. After standing in and getting the feel for teaching, Prange felt like he had found his calling. After graduating from Maryland, Prange set off to get his first job at Winston Churchill High School, teaching chemistry for three years. He then went to work at Sherwood High School for two years, and just this year transferred to Blair.

Fortunately, he has enjoyed himself thus far. "I love it here, this is by far the best environment I've been able to teach in," he says. Prange can be spotted around the third floor, teaching and talking it up with fellow chemistry teachers while wearing his big white lab coat and yellow protective glasses.

Prange is currently teaching AP Chemistry and Honors Chemistry. He hopes to continue his teaching position next year, and looks forward to what will be just his second year at Blair. For now, he enjoys his job, he says. "And I don't mind the kids either," he laughs, smiling. However, after only his first year, Prange has great ambitions.

With a passion for running, Prange has decided to co-coach the cross country team for the 2007 season. He plans to coach with chemistry teacher James Demma. "We've already taken over a lot, and we're holding meetings and getting oriented. I'm really looking forward to it," he says.

Also, just like in college, Prange enjoys playing Ultimate Frisbee and running. "Reminiscing 'bout the old days Mr. Prange?" remarks one of his students, pointing to the frisbee that Prange holds in his hands. "Were you any good in college?" he asks again. "I was never bad," replies a grinning Prange, spinning the discus on his index finger.