Lobbyists have long balanced a precarious position in American government, between murky meddler and cozy cohort. Now, away from the media buzz around more notorious organizations, abstinence-only lobbying groups are wielding a large influence over public policy and keeping birth control prices high on college campuses.

Hidden in Congress's Deficit Reduction Act of 2005, provisions designed to cut back Medicaid abuse inadvertently caused prices for prescription contraceptives to skyrocket on college campuses, beginning in November 2007. Abstinence-only special interest groups were quick to demand that the prices remain high, forgetting that college students are adults with individual liberties and the capacity to make sound decisions. The efforts of such groups may have scared some lawmakers away from voting for measures that would lower the prices - indicative of a broader trend in American society, in which various influential abstinence-only advocacy groups manage to prevent young people from obtaining easy access to birth control and instruction in public schools about the safe use of contraception. 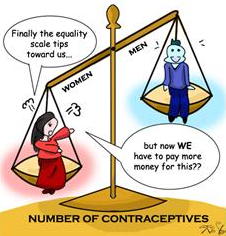 The federal government, which seems to be the most influential abstinence-only special interest group of them all, has funded abstinence-only initiatives in public schools throughout the country from 1996. Congress voted to continue funding abstinence-only education programs for the 2008 fiscal year, although 15 states have rejected the funding this year, according to CBS News.

The price rise has made it significantly more difficult to afford the option of birth control for women in hundreds of colleges and universities nationwide and has also affected contraceptive sales at about 400 community health centers throughout the country used by poor women, according to The New York Times. On average, birth control prices on college campuses have risen from $5 to $50 since 2005. In Maryland, at the University of Maryland, Baltimore County, brand-name birth control became approximately ten times more expensive, according to the University's health center. At American University (AU), prices for birth control pills Cyclessa and Desogen rose from $15 to $25, and prices for Nuvaring rose from $15 to $35, according to the AU student newspaper, The Eagle.

While abstaining from sex is obviously the safest and most effective method of contraception, schools and government officials should not push an abstinence-only agenda that discourages the use of birth control. Students deserve to hear the whole story on sex if the rates of HIV/AIDS infection, other sexually transmitted diseases or teen pregnancy are ever going to decrease. And abstinence-only education hasn't been effective, according to studies conducted by Congress and numerous non-partisan medical associations, including the American Psychological Association (APA), American Medical Association (AMA) and the National Association of School Psychologists (NASP) between 2004 and 2007.

Some in Congress have claimed that the price oversight was unintentional, and one Congressman has introduced a bill to get discount contraceptives back on college campuses. Yet there is also talk of concealing a provision reimplementing the contraceptive discounts inside an unrelated piece of legislation because some lawmakers do not want to be seen supporting the provision, intimidated by the abstinence-only special interest groups within their constituencies, according to The New York Times.

In the mean time, such groups, like Abstinence Clearinghouse, have mobilized to take advantage of the price rise, calling for the discounts on contraceptives to remain off. It is now questionable whether a nationwide provision reducing prices will be drawn up at all, according to Slate Magazine.

College students already have to pay astronomical prices for housing and food and other basic expenses and often cannot afford birth control at its market price. Many students will be coerced into having unsafe sex; not to mention the fact that women carry the chief financial burden in this instance.