In the center of the empty choral room, several parents met with Principal Phillip Gainous this morning. Over coffee, cookies and danishes, the group discussed Gainous's possible resignation and its repercussions. One by one, the parents, including PTSA co-President Dave Ottalini, asked questions of Gainous.

"So, for 23 years you've been the principal here, the CEO," one parent said. "We're obviously not going to be bringing in a newbie. Do you know about the selection process [for a new principal]? Will you sit on the panel?" 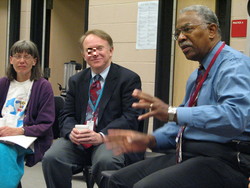 Photo: Principal Gainous met with parents Friday morning to discuss issues such as his possible resignation.

Photo: Principal Gainous met with parents Friday morning to discuss issues such as his possible resignation.

Laughing, Gainous replied, "I haven't gotten the other job yet," referring to his possible position as Liaison for Leadership Development in the county. But, he believed that his replacement will need to be able to "see the community and advocate a lot [for it]" and "embrace the [area school] cluster."

Gainous also acknowledged the support of the community and the parents in implementing Blair policies, such as the implementation of the new reading department, which has helped to increase student literacy.

As the meeting continued, Gainous fielded questions on topics, including speculations of where the replacement could come from and a discussion of the progress of HSA policies. Additional parents dropped by to participate and listen, and English Department Resource Teacher Vickie Adamson peeked in, wearing a sequined red visor in celebration of the pep rally and spirit day.

Towards the end of the meeting, one parent grew nostalgic and ventured into Gainous' 23-year term.

"Do you want to reminisce?" she asked.

With a smile, Gainous spoke about his experiences as an advocate for ESOL students throughout the state.

"I used to challenge these people at state meetings and such, and they didn't know me then. They'd say 'here's that ESOL guy,'" he said. "I feel pretty good about being the agitator."