After Phillip Gainous announced May 8 that he would step down as principal at the end of the school year, the process of finding a replacement principal began.

Choosing Blair's next principal will be a careful and highly scrutinized process conducted primarily by community superintendent Heath Morrison. This week, Morrison held what he calls "characteristic meetings" to inform students, parents and staff about the selection process. Attendants also submitted lists of characteristics of an ideal principal, ordered by priority. 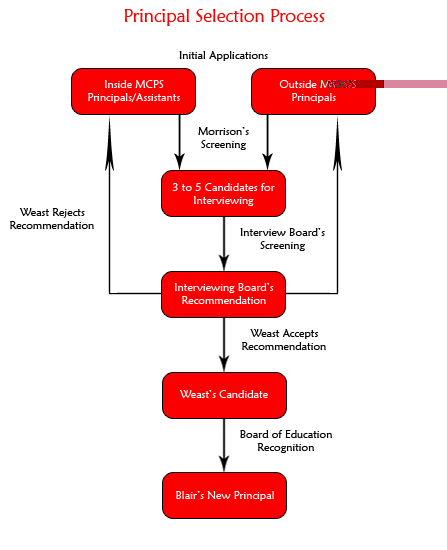 Photo: The principal selection process is being led by community superintendent Heath Morrison.

Photo: The principal selection process is being led by community superintendent Heath Morrison.

The position has been advertised in a bulletin to MCPS employees as well as in The Washington Post and Education Weekly. Usually, advertisements for principal vacancies are generic to attract candidates for all schools throughout Montgomery County year-round. But according to Morrison, the vacancy at Blair has been advertised individually. "Great schools need great principals," Morrison said.

The candidates will come from assistant principals and current principals on the elementary and middle school levels who "aspire to step up," according to Morrison.

Candidates from outside of the MCPS system will also be considered. According to Morrison, outside candidates must have at least three years of "demonstrated excellence in principalship," and will be thoroughly inspected, through on-site school visits and extensive interviews and background checks.

Morrison will screen applicants and select three to five for further consideration, taking into account the desired characteristics gathered from parents, staff and students from the Blair community. "My job is to bring the best candidates forward," he said.

Morrison said he is looking for a candidate who exercises excellent judgment, is responsible to community stakeholders, is undaunted by Blair's size and can successfully manage and embrace the multitude of programs offered at Blair.

After the "characteristic meetings" with parents, staff and students, a selected volunteer panel of six students, six parents and six staff members will participate in the individual candidate interviews alongside key stakeholders in the Blair community, like support staff and the principals of Blair's feeder schools. Morrison says he hopes to select the most diverse group as possible to represent the diversity of Blair's students, parents and staff.

Interviews of the final candidates will begin June 14. The interview board will ask four or five prepared questions, followed by open-ended questions.

Once all candidates have been interviewed, the panel will discuss the benefits and drawbacks of each candidate without advocating a specific person, then compare the qualities of two individuals at a time.

Each panel member will then rank the candidates numerically, and the panel will officially recommend to superintendent Jerry Weast the candidate with the best compiled score. Weast will then make the ultimate decision.

Morrison said that while the interviewing process is thorough, Weast has the full authority to ignore the panel's recommendation and appoint his own choice. "I don't choose the principal, the panel doesn't, but the superintendent does," Morrison said. "It's the superintendent's right, responsibility and authority. He can reject them all."

If all goes according to plan, the next principal will be announced by June 28. He or she will then go before the Board of Education for official recognition.

If Weast rejects the panel's recommendation and does not make his own appointment, or the interviewing board does not want to recommend any of the presented candidates, Morrison will restart the process entirely and appoint an interim principal to fill in next year. But Morrison is confident Blair will find a candidate the first time around. "I think it's unlikely that we won't find a great candidate," he said.

According to Morrison, Gainous will not be a part of the interviewing board, and will not factor into the decision-making process.

Morrison reiterated that Gainous will be involved in mentoring his successor. "It would be irresponsible to not tap into his wealth," he said. Once a successor is selected, Gainous may fill the role of the "consulting principal," working with his successor to ease the transition. "He is committed to work with [the incoming principal]," Morrison said.