Dozens of dilapidated schools waiting years to be renovated. A budget that has been dried out for decades. Taxes that continually increase because of budget issues. Each of these crises has two things in common - each has plagued the state of Maryland for years, and each can finally be resolved if slot machines are introduced. 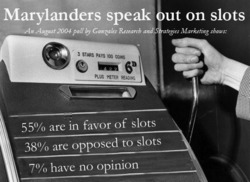 Photo:
History has repeatedly shown that slot machines are extremely effective in raising revenue: Slots in Nevada yield billions of dollars each year, while modest establishments in Delaware earn around $200 million annually for the state. If the Maryland government were to delve into this rich market, they would net around $800 million, according to state government estimates. This amount would be a significant boost to the Maryland budget, which is now suffering from a nearly $2 billion deficit, according to Governor Robert Ehrlich in a recent address.

However, the money from slots would not just be funneled to some distant fund or into mitigating some enormous deficit. Instead, Ehrlich has planned to set aside $100 million of the slot money annually for much-needed school construction programs, a boon to a system of increasingly rundown school buildings plagued by restoration delays and little funding.

The slot machines would not only support the educational system in Maryland but also boost existing businesses across the state. The horse racing business, established in the 1920s in Maryland, has steadily declined in recent years, with events attracting meager crowds and turning paltry profits. If slot machines were built at horse racing facilities, racing would surge, bringing even more money into the state of Maryland and increasing employment and profits statewide. This great boost in racetrack sales has already been documented in both West Virginia and Delaware, two neighboring states that have built slot machines at horse racing facilities.

The allegation that slots are immoral and will attract undesirable characters to our communities is flawed. Other forms of gambling have thrived in Maryland for decades. For example, the Maryland State Lottery grosses nearly $1.4 billion annually, with almost $500 million entering state coffers, according to the Maryland State Lottery Association. Gambling is already a multi-billion dollar business in the state of Maryland and has created a long-established betting culture. This culture will remain regardless of whether slots are introduced, rendering any allegations of the degradation of moral values unfounded.

Other opponents claim that slot machines are simply exploiting gambling addicts, draining them of their resources. While this would be an unfortunate side product of slot machine introduction, Ehrlich has promised a dramatic 5,400 percent increase in funding for gambling addiction services, demonstrating the state's devotion to aiding those who may be harmed by slot machines.

Marylanders must adopt slot machines swiftly, because the competition is fierce. Already, both West Virginia and Delaware have slot machines that draw hundreds of millions of dollars annually. If Maryland does not compete, then it will soon find that all the money that could be boosting its children's education will instead be traveling away from our state and out of the reach of our debt-ridden government.

The public support for slot machines is unquestionable, with a 55 percent to 37 percent majority in favor of slots, according to a Gonzales Poll conducted among 847 Marylanders in August 2004. According to this poll, the plurality of Republicans, Democrats and Independents all support slot machines. With public support of this magnitude, coupled with the inarguable economic and educational benefits, legislators must act quickly to legalize slot machines in Maryland.

John Silberholz. The Chips PRODMAN (and editoral board member), John enjoys basketball, tennis and biking, looks forward to yet another year on Chips. Among other things, he enjoys climbing trees (even though he has a weird tendancy of falling off of them), biking like crazy, playing basketball, … More »