Last week, the NBA announced that it would be implementing a league-wide dress code for all players and personnel, effective at the start of the 2005-2006 season, which tips off on Tuesday. The dress code- stressed as "business casual"- states that players should dress in professional attire during all team and league activities and publicity-related events. The dress code forbids the wearing of hats, "do-rags," chains, medallions, jeans, sneakers and jerseys while players are on the team bench, at press conferences or on team trips.

The league's decision to implement the dress code has prompted an outcry from both players and fans who say that the idea of prohibiting athletes to wear such clothing as hats, jerseys and headbands contradicts the NBA's undeniable link with hip-hop. Philadelphia's Allen Iverson and Indiana's Stephen Jackson have said that the dress code, which explicitly bans players from wearing the baggy jeans, tees and jerseys that have become a mainstay for many of the league's young African American players, directly attacks the hip-hop culture. League commissioner David Stern, on the other hand, stressed that the code was intended to clean up the image of the NBA's players and set a uniform, professional standard. So is the NBA's new dress code justified? 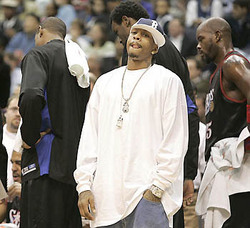 NBA Commissioner David Stern's decision to implement a league wide dress code is integral to maintaining the professionalism and integrity of a league that has tarnished its image in recent years.

Here's an example: The Washington Post reported Sunday that when the Serbian national basketball team arrived in Belgrade last year, at a dinner hosted by the U.S. men's basketball team, all of the players on the squad were neatly dressed in matching sports coats and pants. To the horror of U.S. coach Larry Brown, many of the players on his team sauntered into the restaurant sporting baggy jeans, sprawling t-shirts and flipped-back pinwheel hats. It wouldn't be fair to link the men's sloppy dress to their sloppy play in the Olympics, but by dressing in less-than casual attire, the US sqaud, which "represents" American basketball, appeared to give a collective middle finger to the Serbian team which respectfully dressed their best.

The dress code- hailed by some NBA players and labeled "racist" by others- does not attack hip-hop culture as some critics contend. It merely establishes a needed level of professionalism for team and league business. The dress code is just one of a few small steps that Stern has taken to polish the image of an NBA that has suffered considerably in recent years. The Kobe Bryant rape charge in 2003 and last year's brawl between the Detroit Pistons and the Indiana Pacers, as well as the countless other incidents that have appeared in sports sections around the country (weapons charges, perjury, drug charges, DUIs etc.) have hurt the NBA fan base.

The NBA is a corporation and the athletes are its employees. It is reasonable to request that employees abide by some rules- especially when they're getting paid millions upon millions of dollars every year. The bottom line is that image plays a major part in business, even off the court.

A fan who sees Allen Iverson in a suit will associate none of the negative stigma that surrounds the "thug" image with the sharply dressed NBA star. More important, if its players dress professionally, the NBA will not receive any of the negativity produced by the messages in hip-hop culture- and who do the NBA players work for again?

Although it's undeniable that hip-hop is intertwined with basketball, it is ridiculous to assert that Stern is trying to break up this relationship with the new dress code. Stern and the rest of the administration have and will continue to acknowledge hip-hop's innate partnership with basketball. Rap music will continue to be played at games, hip-hop stars will continue to be side-line spectacles and Ron Artest will continue to appear in Tony Yayo music videos. The only difference now is that athletes will have to dress up a little bit for their five minute post-game confrence. A "racist" attack on hip-hop? That's a little harsh.

Also, athletes like Iverson who complain that the code is an "attack on hip hop culture" should take a look at some of the brightest stars in hip-hop. Kanye West—the Louis Vuitton Don—brags about shopping at GAP for polos, while Jay-Z is often seen sporting expensive designer suits (and he's a co-owner of the Nets).

So, even if creating a dress code only means that athletes who have previously dressed as "thugs" come off as a little less intimidating or stigmatized, then so be it. These players have an obligation to their entire fan base, not just to the hip-hop loving inner-city kids who emulate them. Commissioner David Stern is correct. The NBA needs a dress code.

Abe says NO: A misguided approach and an attack on hip-hop culture

The newly implemented NBA code is an attack on the "hip-hop generation," the culture, lifestyle and personal expression of players and is a misguided approach to righting the league's image problem.

David Stern's sudden realization that the NBA's supposed "thug" image is a reflection of the league's players is hypocrisy at its finest. For Stern and the NBA to reject hip-hop culture in its entirety now is ridiculous. What music is played in NBA arenas? Hip-hop. Who wears NBA jerseys in their music videos? Hip-hop artists. Who are courtside mainstays in NBA arenas? Hip-hop artists. Hip-hop is a culture that has been embraced by the NBA for decades. The relationship between hip-hop and the NBA, good or bad, is firmly established.

Stern's new dress code is a direct attack on the young generation of NBA players who love and live hip-hop. The NBA is saying a collective "pull up your pants, young man" to its players.

The NBA's dress code is an issue that sparks calls of "racism" that are not so outlandish. When was the last time a white NBA player sported a throwback jersey, a do-rag and a chain at their post-game press conference? To dismiss the dress code as a total non-racial issue would be ignorant. The regulations are more of a restriction on visible black players who are symbolic of hip-hop culture than on unheralded white players who dress in a fashion representing their own culture, which for the most part conveniently fits under the new rules.

The NBA is right in realizing that it has a big image problem, and the issue was brought to the forefront by Pistons-Pacers brawl in November of last year, but a league-wide dress code is not the way to go about changing it. Not only is the dress code a decided harassment of the hip-hop generation, but it will also prove to be ineffective. As Sixers' star Allen Iverson put it, "You can put a murderer in a suit and he's still a murderer." The players' dress alone will not shed the link between the NBA and hip-hop because players will still walk, talk and act like they did when they wore what they wanted. Players will side-step the new rules by wearing outlandish and creative forms of "suits" and "casual attire," causing more disunity between generations than unity. According to ESPN.com, Pacers star Ron Artest has vowed to wear zoot suits and crazy gear while still adhering to the dress code in order to stick it to Stern.

Furthermore, if the NBA's dress code is allowed to proceed, what restrictions will be put in place next? Will Stern and his old regime restrict the hair, tattoos and endorsement deals of players?

The concern of league officials that the "thug" image perpetuated by NBA players is seeping into the minds of young fans is completely justified. However, the majority of kids who look up to NBA players as role models never see them at press conferences or at dinners with the Serbian national team. The kids see Iverson and other players on television in uniform or in commercials, when the players express the hip-hop culture so feared by Stern and NBA officials. MTV and commercials, more so than "league affairs," are what shape kids' mental link between basketball and urban society.

The dress code's attempt to wipe the hip-hop image from the world's view of the NBA tells players that their individuality and their culture is looked down upon and considered inferior. Why? Because they wear oversized clothing? The dress code is personality-stifling and fake. The dress code is a temporary band-aid to a deep wound, plastic surgery for something that needs a societal overhaul.

Yes, wearing a suit is a sign of professionalism, and many superstars choose to don suits by choice, but being well-dressed should not be an institutionalized rule that rejects individuality. The dress code should not be hailed as the complete repairing of an image tarnished more by actions than illustrations, but instead as a foolish and likely ineffective method of doing away with an image once embraced by the NBA. Stern and his boys ought to be addressing the reasons why the NBA's players are increasingly a part of police blotters, instead of worrying about whether they are wearing Armani or Adidas.