In the 1970s, amid parachute pants and anti-war demonstrations, "Gifted and Talented" (GT) labeling had just been introduced to elementary schools in Montgomery County Public Schools (MCPS) as a tentative and undeveloped idea. Three decades later, 40 percent of MCPS second graders are labeled GT and receive accelerated instruction, according to the Washington Post.

GT labels designate that certain elementary school students are academically ready for the school's GT program, which provides students who excel more opportunities for advanced coursework in the fourth and fifth grades. The GT environment is one that "enriches, accelerates and extends the MCPS curriculum," according to the MCPS GT website. These extensions in curricula include higher-leveled sciences, mathematics, language arts and social studies.

Currently, MCPS is in the process of deciding whether all elementary schools with GT programs should eliminate GT labels. However, a timeline has not been set yet, according to the Division of Accelerated and Enriched Instruction. A decision may be made "some time during 2009," according to the division.

Many see the elimination of GT labels as an equalizing force, opening the doors for all students to gain access to a more demanding education. Others, including many parents, contest that removing GT labeling will lower academic expectations.

Georgian Forest and Burning Tree Elementary schools have already implemented pilot programs to test the elimination of GT classes, but should GT labeling be eliminated in all MCPS elementary schools?

Schools are designed to be a haven for intellectual growth and challenge. But with elementary students performing at a wide range of achievement levels, assigning work of varying difficulty for each type of student is problematic. The GT program is one way that schools systems have accounted for this discrepancy. Although constructive in theory, the GT label is destructive in practice, compromising social stability for education achievable in other ways. Montgomery County should drop the label, and other school districts should follow this lead.

Whether consciously or subconsciously, the process for allocating the GT label discriminates against students. Black and Hispanic students are half as likely to be considered GT as white and Asian students, according to the Washington Post. This discrimination unfairly denies minorities accelerated instruction. Because GT students are marked as such on their permanent record, white and Asian students have an immediate advantage over black and Hispanic students when administrators look at their records if the student misbehaves or needs a schedule change.

To be designated as GT in Montgomery County, students must receive a high score on a traditional intelligence test administered in second grade, according to the Washington Post. In a 2004 study by Vanderbilt University, Dr. Donna Y. Ford, Professor of Education and Human Development, states that most of the time students have not had an equal chance to learn the information presented in these tests. Because cultural diversity is not adequately incorporated in the test group for GT exams, the content can mostly be based on the standards of upper-middle class society, according to Ford. So according the socioeconomic makeup of our country, non-whites, specifically black and Hispanic students, are at a disadvantage. 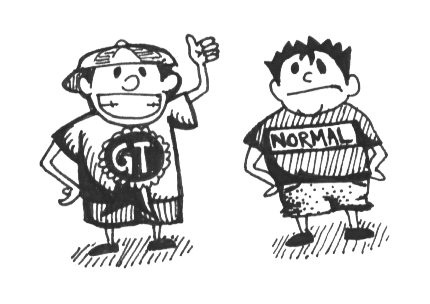 Photo:
The label also has negative effects even within the elite club. Girls with the GT label especially consider performing at their high academic level harmful to their social profile because it allegedly exposes them as less physically or socially attractive, according to Gross. Young girls certainly don't need another factor contributing to their negative self-image.

The GT label is also applied inconsistently throughout the nation, and it can be detrimental to all students. With each state crafting its own definition of "gifted," students who qualify for advanced instruction in some states may not meet the criterion for GT in their own state. Denying these students the option of pursuing a more suitably challenging educational experience is unreasonable. While they are struggling to remain interested in average coursework, others at their same aptitude level are thriving in a more demanding environment. In some states, the opposite occurs. Lower achievers make the qualifications for GT and students of equal performance in other states don't get that same chance to take advantage of accelerated instruction. Because it is virtually impossible to equalize the qualifications for GT around the country, the label should be eliminated altogether and replaced with separate classes for high performers and low performers.

Forgoing the GT label does not mean relinquishing what it provides for higher achieving students. Schools certainly can implement a program that addresses the disparity in academic aptitude among students without labeling students and causing discrimination and social instability.

Teachers should meet and discuss on a case-by-case basis, to avoid test prejudice, which students should be placed in more challenging classes without outwardly handing out "gifted" labels. Arranging all students in separate appropriately demanding classes will not draw attention to any particular group of students. This approach will maintain a division between non-gifted and gifted students, but the students will not know which group is for higher performers so there will be no social tension.

Such a separation has been shown to increase productivity in gifted students, according to a 1995 study by the National Research Center on the Gifted and Talented in the University of Connecticut. Isolated groups will also prevent the cooperation of GT and other students, which the previous study proved decreased non-gifted students' self esteem. Under this system, students of similar academic aptitude will be able to learn together so gifted students will feel comfortable performing to the best of their ability. Higher achievers will receive accelerated instruction without being categorized as better than their peers.

Considering it is 2009, school systems should be above and beyond enforcing a discriminatory and unfair label in elementary schools. The only educational option for gifted students should not exclude children with the same qualifications as others in the program, nor incorporate students ineligible in other states. To prevent further emotional, social and physical tension during the crucial transitional elementary years, the GT label should be abolished in Montgomery County.

Sophia Deng says no: The GT label appropriately identifies students' needs and enables all students to receive their respective levels of instruction.

In most Montgomery County Public Schools (MCPS), students go through a process called global screening in the second grade for labeling. Labels are assigned based on results on cognitive exams, parent, teacher and staff surveys and students' reading and mathematics levels, according to a December memo from the Division of Accelerated and Enriched Instruction. "If identified, a 'GT' label is attached to the individual student record," the memo reads.

In order to identify students who need more advanced coursework, these GT labels are essential. Just as there are identifications for students who have learning disabilities or need extra help in the classroom, there should be indications for students who want or need extra stimulation in the forms of higher math or reading education. Refusing to place GT labels on high-achieving students is equivalent to slighting and neglecting those students. By ignoring students who want advanced work, teachers and schools can make these brighter students bored and unmotivated and make their parents crazed.

For GT students, receiving different instruction does not mean elevation to a special and higher level. There is a general misconception that labeling students "Gifted and Talented" means that teachers will focus on the talented and leave the "average" students behind. By contrast, GT labeling actually enhances the services and attention that all students receive because teachers are better able to zero in on specific needs.

Although elementary schools have various educational structures across the board, in general, students receive group instruction with their entire class, and then divide into small groups of GT and non-GT clusters, according to Kay Williams, Director of the Division of Accelerated and Enriched Instruction. This structure allows the GT-labeled and non-labeled students to obtain specialized services based on their specific circumstances, such as on-level reading instruction for the non-labeled students or advanced College of William and Mary reading material for GT students. Temporarily separating students into labeled groups efficiently allows teachers to address homogenous groups at one time, creating more organized instruction. Separation also allows students of various levels to function in academically balanced environments.

This does not mean that GT labels promote segregation or favoritism; instead they allow teachers to address student needs accordingly, all within one classroom. The sense of stratification that causes uproar is not a problem with GT labels, so much as with the implementation of GT labels. Already, some of Montgomery County's elementary schools are "flexible," according to Williams, allowing students who were not initially labeled GT to gain opportunities to participate in the higher-level instruction if they perform well or show advanced thinking later on in the school year. This mobile system needs to continue for GT labels to be seen as informative and useful data, rather than a showy badge of honor or red stamp of rejection.

Labels are necessary in elementary schools in order to provide important bases for designating students. GT labels do not point out whether students are "good" or "bad" - they focus on academic characteristics that students share, enriching education for GT and non-GT students alike. Labeling has inhabited MCPS for over 30 years, and it should be here to stay.