Is piracy invariably damaging to the film industry?

Jenna Bushnell says yes: piracy is a criminal activity that saps millions of dollars in revenue from an already-struggling industry.

Thanks to the Internet, we have access to people and information from around the world, gaining new insights into the world around us. We've also gained the ability to conveniently access many things illegally. While the freedom of information that the Internet provides seems limitless, there is one thing that definitely needs to be stopped: movie piracy. 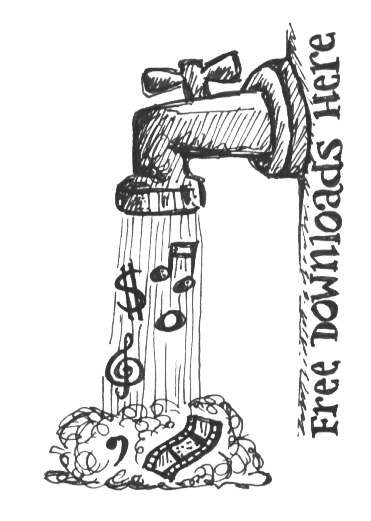 Photo:
LimeWire and other file-sharing programs allow users to illegally download music and movies for free, before they have been released as an album or onto DVD. What this means is that filmmakers and the hundreds of other people who work to produce a film do not receive the revenue they deserve. While it may seem like it is easier and more cost-efficient to just download the movie instead of going to the theater and paying to see it, the truth of the matter is that this process is stealing and is very much illegal.

The movie industry has struggled to combat DVD and Internet piracy and has recently been making the argument that it is hurting the U.S. economy as a whole. The movie industry loses an estimated $6 billion per year because of illegal film trade, according to reports from the Motion Picture Association of America (MPAA). The consulting firm L.E.K. calculated the reported effect that those losses in sales have on the rest of the economy and found that movie piracy accounts for a total loss of $20.5 billion per year, which translates into the industry not being able to create 140,000 jobs. That then means that there is a loss of more than $800 million in revenue.

The astounding statistics are devastating not only the waning movie industry, but our economy as a whole. While the occasional high-profile film like "X-Men Origins: Wolverine" may gain publicity from leaks (although that is still debatable and probably impossible to readily test), the industry as a whole suffers when these films reach fans before they do theaters.

The film industry, which has given us countless classics that have made us convulse with fear, ache from laughter, tear from sweetness and pulse with excitement is slowly dying. Disinterest in movies thanks, in part, to piracy has caused the film industry to struggle. So as tempting as it may be to illegally download that unedited copy of "X-Men," shut down LimeWire, grab your $10 and go see a movie the old-fashioned way because that's where the magic lies.

Fran Djoukeng says no: piracy is a cheap, efficient way to spread the word among the public and generate hype from a variety of sources.

Enjoying a night on the town at the movies is usually a family-friendly experience, but with the prices of movie tickets and concession food rising exorbitantly, piracy is becoming a valid and beneficial medium of opportunity.

Photo:
When "X-Men Origins: Wolverine" popped prematurely onto some websites, buzz for the film spawned faster, even making its way onto nightly news coverage. Yet that did not hamper box office sales; instead, it added to the enormous box-office blowout that Twentieth Century Fox reaped from the superhero production: a staggering $87 million. Although the unfinished workprint of the summer blockbuster was leaked online over eight weeks ago, "X-Men" retains the title of the highest grossing-film of the year so far. While movie executives cry about piracy, they seem relatively unperturbed about this latest leak, green-lighting sequels and approving spin-offs based on current success.

Today, the Internet is the ultimate tool for advertising. Piracy is essentially illegal promotion, but is promotion nonetheless. The Internet affords people from different cultures and backgrounds and regions in the world exposure to new tracks, albums, music videos and foreign motion pictures. Though the initial introduction may be free and illegal, the process introduces audiences to new products and companies to new markets.

A leaked version of a film is an effective way to develop consumer trust, allowing buyers a way to view more than just what the studio wants them to see, like trailers that are cut to only show the best parts of a film. As movie executives engage in marketing for an upcoming film, the more omnipresent a film advertisement, the greater chance it will translate into dollar signs (the bottom-line for any and every theatrical release of a production company).

The film and music industries feed the public overinflated estimates about piracy's financial damage. But industry estimates on revenue loss count every incident of piracy as a potential sale, while people who pirate their media for free might think twice if asked to pay for the same product. Granted, there is a drop in potential sales with material that is unsanctioned by a production company, but the movie, music and other outlets of the entertainment industry are still thriving as pirated movies and albums incessantly make blockbuster and platinum status. For those who deem the movie industry as crumbling, a great fallacy lies into this claim. Even given the current woes of the economy, many Americans have been congregating and purchasing tickets at local theaters. For 2009, ticket sales have increased by 17 percent and attendance has been elevated by 16 percent, according to the New York Times.

Piracy is an avenue that encourages wider accessibility for movies, expansive promotion for studio producers and hype-inducing features to the general public which easily increase the sales through legal streams. As the internet is a revolutionizing network of exchange and interaction, no amount of FBI investigation or international crackdown can eliminate the global mechanism of piracy and its effects on the modern entertainment industry.

Thanks for all your hard work!! The breakdowns on how to resize or reposition in the middle of an IGTV tutorial are a little redundant HOWEVER~ Lists like this are absolutely invaluable!!! It can be overwhelming with how many resources are out there and where to spend the bucks. Having a pro like yourself break it down based off of experience can save lots of time. Keep up the Great Work. <a href="https://www.updateland.com/">Joseph Donahue</a>