Should Blair be required to implement OARS when it already has BEN?

Miriam says Yes. OARS will be beneficial to the Blair community.

How many times have students looked at their report cards and said, "If I had only done that one assignment, I could have gotten the grade?" Often the lack of up-to-date information available to students hinders their ability to perform in classes. Systems like Edline will be beneficial in combating failure while also strengthening parents' roles in their children's education.

Edline increases awareness of classroom activities. Every night, Edline automatically pulls each student's grades from its database and e-mails them to parents. Using passwords, students and parents can check assignments, tests, practice schedules, grades and even cafeteria menus. 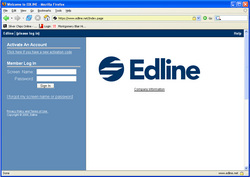 Photo: After logging in to Edline from the pictured page, students can view updates on grades, announcements and the calendar.

Photo: After logging in to Edline from the pictured page, students can view updates on grades, announcements and the calendar.

Donna Franklin, Blair's Financial Assistant, uses Edline to track her son's grades. Her son, a freshman at Northwood, did not know that he was doing poorly in math until Franklin received an e-mail with his grade. She immediately told her son, who talked to the teacher and improved his grade. Franklin believes that the benefits of Edline are widely recognized, at least by parents.

Franklin's experience shows how Edline increases communication between parents and teachers. "Anytime there is more communication with parents, it is beneficial," says Principal Phillip Gainous.

The issues that come with implementing Edline at Blair were introduced to Blair teachers last year. According to Gainous, many staff members discussed the benefits and drawbacks of the program with colleagues using it at test schools. The feedback they received motivated them to vote against the implementation for the 2006-2007 school year.

While Pinnacle did crash on Nov. 1, the glitch was fixed within five hours. Gainous said that Blair plans to implement a better, more complete version of Edline next year.

Unlike other high schools, Blair has its own internet database, BEN, to inform students about their class assignments, schedules, class rosters and e-mails. Edline is a much more thorough version of BEN, with additional features including sports schedules, cafeteria menus and, up-to-date grades. Edline also comes with a built-in support system. According to the MCPS web site, every school that uses OARS will have an Edline "super user" who is in charge of parent, teacher and student accounts and will also provide any necessary maintenance or support. MCPS will also provide each school at least one grade book adviser specially trained in using Pinnacle to help teachers having technical problems. Switching to Edline will not require much technical training for teachers because they are already proficient with a similar program.

Joseph Lynch, a teacher at Seneca Valley High School and former Blair teacher used BEN for about 10 years and Edline for six months. Lynch advocates for Edline saying, "Edline's power to post up-to-the-minute grades saves students and me a great deal of class time and aggravation." He sees many examples of Edline superiority. "Edline lacks nothing that BEN has. It has more," he said. "Edline, in my opinion, has a better layout [and] tells students what work they need to make up based upon the data it uploads from Pinnacle. I have to say this is a huge advantage over BEN."

When first introduced, BEN was received with skepticism from teachers like Lynch who thought it would just be another responsibility to add to already hectic days. But Lynch explains that after using BEN for a few months the benefits were apparent and teachers became interested in the new program. Now there is a better option available: Edline.

Blair's administration, teachers and students must move past BEN to a program that will more adequately meet the needs of the student body. This may be difficult because of the pride associated with being the only school with such a program. But, Lynch explains, "There is no doubt in my mind that once the psychological barriers are crossed, teachers will recognize the increased benefits of using Edline."

Poorva says No. OARS will be detrimental to the Blair community.

OARS may seem like an excellent system to allow parents to keep track of students' grades, but it becomes intrusive to a student's study habits with Edline. Edline lets students and their parents see every individual grade instead of simply showing the overall grades. While BEN does not report grades like Edline, it does let parents view students' schedules and assignments and is specifically designed for Blair. With Edline, students will have to deal with unneeded pressure from their parents who will now be able to know every minor detail about their children's grades.

While some supporters of Edline may argue that parental awareness of the students' school performance is important, computer-generated communication is not a solution. The system will instead foster laziness as students will lose any sense of responsibility to tell parents about school and grades themselves. In any case, schools do provide interims that allow parents to see what subjects the children need help in without being able to obsess over the allocation of individual points. 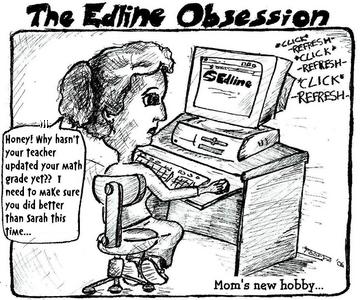 Photo:
BEN is already an effective way to facilitate student-parent communication. Not only does BEN let students and parents see the children's schedules and assignments as Edline does, but it also provides a built-in e-mail system and file storage which Edline does not, according to junior Seth Reeker, the only Blazer currently attending the OARS Workgroup meetings. The use of two programs, Edline and BEN, will cause confusion and redundancy. Since teachers will be required to update Edline, BEN usage will decline after years of hard work of getting teachers and students to use the network.

Over the past summer, BEN 2.0 was already in the works. Added features include a calendar view and a graphical planboook display, according to senior Julia Kaufman, a student working on BEN 2.0. She fears that "if the county mandates use of Edline, BEN 2.0 would probably not be used to its full potential." The clear advantage BEN 2.0 has over Edline is that it is created specifically for Blair, even incorporating teacher suggestions. Edline is a generic program that can work for most high schools but cannot meet specific needs for each individual school.

That OARS is countywide also means that students would not be able to help fix the glitches that currently exist in Edline or Pinnacle, which would especially be a problem for Blair's large population. Because many bugs still exist in the system, Blair chose to not implement OARS this school year. A glitch in Pinnacle even caused the program to crash on grade day at the end of the first marking period. Problems with BEN, however, are fixed relatively quickly since a group of Blair students under the supervision of network administrator Peter Hammond run the system. Even though BEN does go down once in a while, no serious risks such as losing all the entered grades exist with the network.

According to former BEN system operator Daniel Green, who used to attend the Edline meetings, Edline is geared toward parents while BEN is geared toward students. While they may be accessed by both parents and children,with the implementation of Edline, students will be put at a disadvantage if BEN use declines rapidly. He also points out the problem of having to adjust to a completely new system with OARS. "Teachers are not going to be the quickest to learn a completely new system," Green said, "and as a result the amount of information available to students and parents after the switch to Edline could significantly decrease." Thus, BEN 2.0, which is built to look like BEN, will minimize the amount of effort needed to adapt to a new system.

Blair should not be forced to use OARS, because it will be taking a step backwards since the school already has a well established system unlike other high schools. Students have put much effort into building BEN (and now BEN 2.0) to make sure it suits Blair's needs. To promote healthier student-parent communication, the school should instead place more emphasis on encouraging teachers to update BEN. Direct communication with students and parents will foster stronger support.

Miriam Ragen. Miriam Ragen is a senior. Her favorite things are harry potter, the heroes wall, seattle and how awkward kate is. You can usually find her awkwardly pulling at her shirt sleeves. More »