Ethan says: A downward spiral of professionalism and sportsmanship at all levels of athletics is plaguing sports.

Some semblance of sportsmanship may exist in the professional world, but the problem is that examples of good sportsmanship are overshadowed by examples of bad ones. Today, young athletes are exposed more to players like Ron Artest and Ricky Williams than to players like Reggie Miller and Emmitt Smith. The result: a generation of young athletes whose only role models are weed-smoking running backs and bench-brawling basketball players. 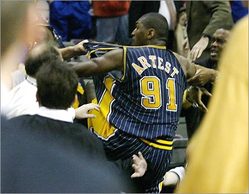 Photo: Ron Artest and fellow NBA players have shown increasingly bad sportsmanship, including during this bench-clearing brawl that spread to the stands last November.

Photo: Ron Artest and fellow NBA players have shown increasingly bad sportsmanship, including during this bench-clearing brawl that spread to the stands last November.

You could argue that the media pays more attention to the bad side than to the good side of sports. Still, that doesn't refute the fact that ten, 20 years ago there were no incidents and scandals that could compare to those of this century. There was no steroid abuse, no violations of drug policy, relatively few (in comparison) altercations between players and no excessive celebration to rub in a touchdown, basket, homerun etc. Athletes were, simply, better behaved.

Maybe the rise in unsportsmanlike conduct can be attributed to the ridiculous amount of money that professional athletes are paid. As athletes' salaries increase, so does their bad behavior. In 1995, the average NBA salary was $1.5 million. Ten years later, the average salary jumped to $3.7 million. Again, a decade ago, nobody would have dreamed of athletes strangling their coaches, making death threats to teammates or barging into the stands to brawl with drunken fans. But today, money is equated with competition and the emphasis on winning is edging out what used to matter to athletes: love for the game, respect and fun.

The stress on winning at the professional level is having a trickle-down effect on athletics at younger ages, which is why we are also seeing so many examples of decreasing sportsmanship at the high school and elementary school levels. In a November 30 article, The Colombia (MO) Daily Tribune reported that 27 percent of athletes under age 15 said that they had behaved like "bad sports," which included trying to hurt an opponent, arguing with an official and making fun of less-skilled teammates. A side effect of this increase in unsportsmanlike conduct at younger ages is a decrease in the number of officials refereeing games, particularly in high school athletics. According to a National Federation of State High School Association study of 463 recently retired officials, 23 percent said that they resigned because of poor sportsmanship by participants. An additional 21 percent cited poor sportsmanship by fans as the reason they left officiating.

In many cases, athletes' bad sportsmanship can be attributed to the attitude of their coaches. Brenda Bremeier, an associate professor of education at Missouri-St. Louis University says, "Even more disturbing is the number of coaches whose behavior fosters unhealthy climates." It's fair to say that sportsmanship has reached a new low when coaches of middle and elementary school age children teach their players that winning, no matter what, is more important than respect and dignity.

Thanks in part to the thoughtless actions of professional athletes, the principles that athletics once revolved around — respect, love for the game and fun — are being destroyed. It's going to take a lot more than the selectively issued "sportsmanship awards" to reverse a downward spiral of professionalism and sportsmanship at all levels of athletics.

Abe says: Despite media reports to the contrary, sportsmanship is still flourishing.

Images and examples of respect and professionalism in sports are never the lead story on "SportsCenter," never grace the front of the Sports section and never get attention from Congress. Instead, steroids, salary disputes, cheating, brawling, fighting and disrespect are the issues the media presents to young, impressionable athletes and all sports fans. Instead of television sports programs showing the post-game handshake between NBA superstars Tracy McGrady and Steve Francis, viewers are bombarded with highlights of bad boy Rasheed Wallace's flagrant fouls and Gary Payton's on-court trash-talking.

Professional sports are full of role models, but not all have negative influences on kids. Terrell Owens of the Philadelphia Eagles, one of the NFL's most visible stars, has been at the center of controversies, such as salary disputes and negative public comments about his teammates, involving his continuing disrespect and disregard for teammates, coaches and league officials. On the flipside, players like Colts quarterback Peyton Manning represent good role models for young athletes. Manning, the NFL's reigning MVP, is involved in multiple charities, including the United Way.

Owens and athletes like him can never be swayed from their outlandish, anti-social behavior. But the Eagles have taken a step in the right direction. They have refused to continue to put up with Owens, suspending him indefinitely and telling him to remain separated from the team. If more franchises and organizations followed the Eagles' lead, the cancerous players who destroy locker rooms and display bad sportsmanship would not affect young athletes and fans. Instead, kids will now look to Donovan McNabb, Owens' former teammate and stand-up guy, as their role model.

Two decades ago, some athletes acted just as poorly as Owens. But the media coverage of sports in the 1980s was minimal in comparison to today's world of 24-hour sports TV networks, meaning that the level of bad behavior in sports has never changed in the last twenty years, but simply been discovered with the intense media attention devoted to sports in the last decade.

The word "sportsmanship" can be misused in today's sports world. Whenever an athletes get so competitive that they grow angry and get a technical foul or a red card, critics are quick to call the act a display of poor sportsmanship. But sportsmanship is about each athlete's individual respect for the sport and their opponents when they are not competing. For example, no matter how heated and physical a World Cup soccer game may get, the teams still swap jerseys afterwards as a sign of respect and appreciation for their opponents.

Parents, fans and athletes alike should remember that sports are fun, and that sportsmanship at its core is about respect. Sportsmanship is little four-year-olds swarming around a soccer ball in oversize t-shirts on a Saturday morning. Sportsmanship is why there are 40 year-old rookies in Major League Baseball, why players like Doug Flutie, Derek Jeter and John Stockton are heroes and role models for young kids. The bottom line is that for every Terrell Owens, there's a Brett Favre and for every Ron Artest there's a Ray Allen. Finding the right role models to admire is the key, a responsibility that rests with kids and their parents. Fostering good sportsmanship is as simple as identifying and separating the negative influences from the positive ones, the brawlers from the ballers.