Pro/Con: Will banning the use of handheld cell phones while driving benefit Maryland drivers? 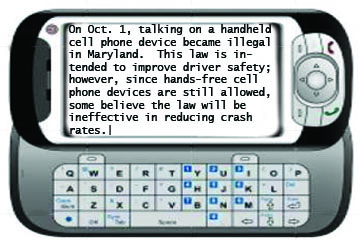 Photo:
On Oct. 1, talking on a handheld cell phone device became illegal in Maryland. This law is intended to improve driver safety; however, since hands-free cell phone devices are still allowed, some believe the law will be ineffective in reducing crash rates.

Maryland's recent cell phone ban should not be shocking news because it is not a unique concept. The idea of banning driver cell phone use has been around since people realized how distracting it was. Scientists have been studying the debilitating effects of cell phone use on driving ability since the 1980s, and most have advocated a cell phone ban ever since. However, Maryland state legislators have dawdled in trying to address the issue until recently. This ban may be late, but it is necessary in order to promote safe driving on our nation's roads. 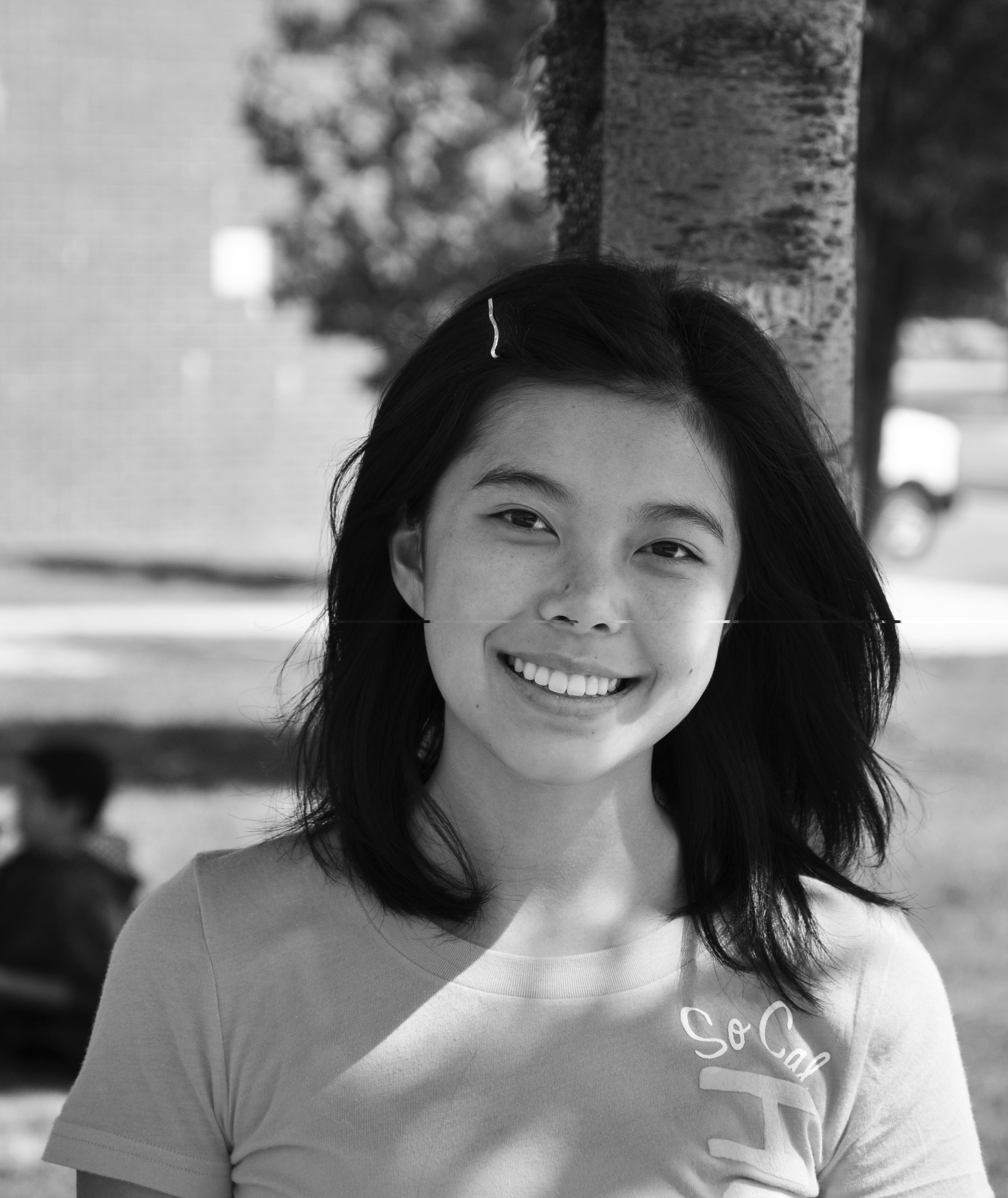 Photo:
In Maryland, for example, Del. John S. Arnick (D-District 6) first proposed a bill to prohibit drivers from using cell phones over ten years ago, in 1999. This past spring, after being shot down in the legislative process for year after year, the ban finally passed under the sponsorship of Sen. Norman R. Stone (D-District 6).

The main rationale behind the ban is safety. Not only does cell phone use increase the risk of a collision, according to a study conducted by the National Highway Traffic Safety Administration, but it also causes the highest percentage of traffic incidents. In addition, a study published in "Accidental Analysis & Prevention", a scientific journal dealing with transportation accidents, concluded that using the phone while driving increases the risk of injury in a car crash by an astounding 38 percent. Slower reaction times and slower brake response times are the causes for these shocking statistics. At high speeds, a few seconds delay in reaction time can be the deciding factor between a fatal collision and a quick swerve out of the way. The more slowly drivers react and the longer it takes for them to stop the car, the greater the chance of collision.

While the ban's main purpose is to decrease these chances, it could also alleviate another problem caused by driver inattentiveness: traffic congestion. A Japanese study published in "IATSS Research", an academic journal on transportation safety, concluded that people drive more slowly while engaging in a cell phone conversation, which disrupts traffic flow. Although slower speeds might mean less damage in a potential crash, they can cause disruptions in the flow of traffic. As cell phones become even more ubiquitous in everyday life, more people will be tempted to make calls while driving. This could result in legions of sluggish drivers clogging up our highways even more.

The consequences of distracted driving can range from being simple annoyances to fatal accidents, but the risk of collision can be lowered if a driver concentrates solely on driving. Although the proposed bill takes a first step in eliminating driver distractions, it does not prohibit the use of hands-free devices. Dr. Peter Hancock, a researcher and professor of psychology at the University of Central Florida, said that paying attention to the road is much harder to do if one is engaging in a cell phone conversation, regardless of whether he is talking on a handheld or hands-free device. Hancock explained the mental distraction of having a phone conversation is more dangerous than the physical distraction of handling the device. Any situation in which the driver is in a conversation and is not concentrating on driving creates a potential risk.

Ensuring that drivers, as well as the legislature, stay concentrated on safety is the key to securing the safety of Maryland's roads. While Maryland has made a big step towards safer roads with its ban on handheld cell phones, we still have the opportunity to improve the ban further. For instance, the ban should be extended to hands-free devices as well. This addresses the problems of distracting phone calls as well as the case of drivers buying hand-free accessories to get around the handheld device ban.

Finally passing this ban is a commendable accomplishment for Maryland's government, but the struggle is not over. The next step is to strengthen and solidify the legislation, so that one day the danger of cell phone distractions will be eradicated from our roadways.

Larisa Antonisse says no: The law is an unfair restriction of personal liberty and will not reduce crash rates.

It's common knowledge that texting while driving is not a safe practice, but talking on a cell phone is a different issue. It involves no more mental distraction than holding a conversation with another passenger and no more physical distraction than grabbing a bottle of water. If the use of cell phones while driving is illegal, then it only makes sense to ban eating, drinking, changing the radio and applying make-up - don't forget dangerous activities like glancing at the scenery as well. 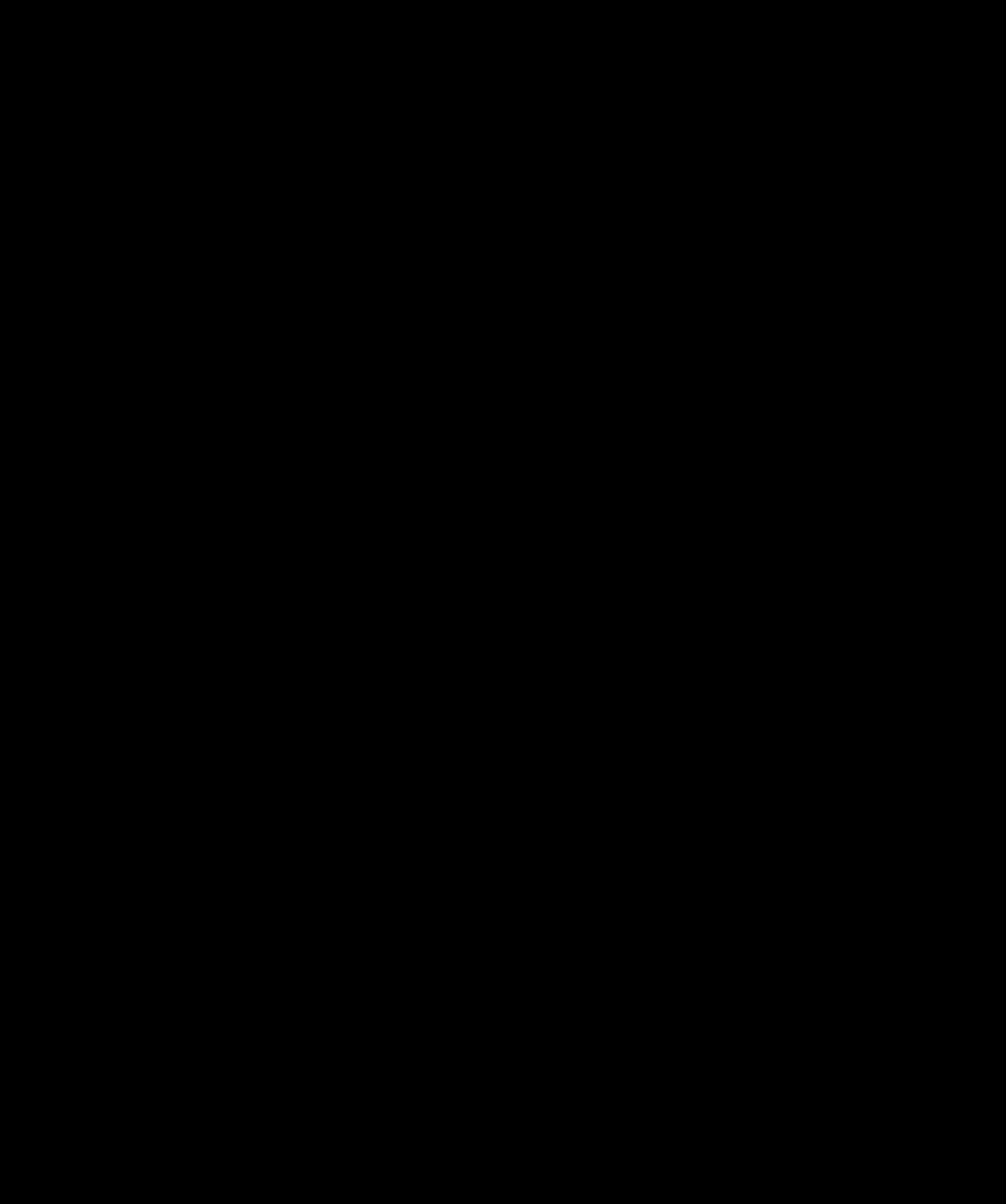 Photo:
Maryland's recent decision to ban handheld cell phone use while driving is a half-hearted attempt at increasing safety, but it is really an unnecessary restriction on personal liberty. The expensive hands-free devices, which for the time being are still legal, impose an unnecessary financial burden on citizens and will not make Maryland's roads any safer.

Since citizens are unlikely to worry about the slim chance of punishment for a behavior deemed a "secondary offense", this law will do nothing but make criminals out of millions of otherwise law-abiding Marylanders. According to Kim Stewart, spokesperson for the Highway Loss Data Institute, "Even with these bans, drivers continue to use their cell phones because the likelihood of getting a ticket is very low." Therefore the law not only restricts citizens' freedoms, but it also makes life more difficult for the police, who aren't able to discipline the public in a way that is harsh enough to reduce illegal behavior.

In general, regulations restricting freedoms of citizens must be justified by some positive outcome for society. In this case, many would say that the societal improvement is increased safety; however, legislators have failed to prove that bans on handheld cell phone use decrease automobile crash rates. Some studies - the ones that proponents of the new ban will reference - have shown that crash risk, or potential, increases with handheld cell phone use. Other studies, however, have taken the time to evaluate the actual crash rates, instead of just theorizing about them. After assessing the effects of handheld cell phone bans in four other jurisdictions, the Highway Loss Data Institute found no reduction in crash rates after such laws took effect. With such large amounts of money and police time at stake, basing a law on pure theory is a mistake.

Many people also mistakenly believe that talking on a cell phone is the most common and most dangerous distraction to drivers. On the contrary, cell phone use is actually a very small percentage of the total distractions to drivers, according to a study by the National Highway Traffic Safety Administration (NHTSA) on what people do while driving. The study found that drivers engage in conversations with other passengers for approximately 15.3 percent of their driving time, while spending 14.5 percent of the total driving time engaged in some other activity. Of that 14.5 percent of time spent on other distractions, only 1.3 percent is spent talking on cell phones, whereas 4.6 percent of the time involves eating or spilling and 3.8 percent involves reaching for something or experiencing "other internal distractions." Even the distractions of manipulating audio controls and smoking take up more time than cell phone use, totaling 1.4 and 1.6 percent, respectively.

In response to these findings, many proponents would rationalize a ban on cell phone usage without bans on other distracting activities by claiming that cell phones are more distracting than the other listed activities. Yet this belief is also far from definite. A separate report by the NHTSA stated, "The available research does not provide a definitive answer as to which behavior is riskier."

There's no question that cars can become dangerous weapons and should be used carefully. But the government cannot possibly ban all distractions to drivers, and it is an unjust limitation on personal freedom for them to ban a practice that causes little danger. It is up to the drivers to ensure that they do not put themselves, or others, in danger by engaging in unnecessary diversions while behind the wheel.