Pro/Con: Will the Congressional jobs bills be the solution America's economy needs?

Both the Senate and the House of Representatives passed similar versions of a $15 billion jobs creation bill, initially created by Senate Majority Leader Harry Reid (D-Nev.). Reid drafted the new bill as an alternative to a bipartisan Senate jobs proposal and after the House passed a $155 billion jobs bill in December.

Gridlocked. Incompetent. Useless. These words, while harsh, have been used with increasing frequency by individuals and the media alike to describe the often sluggish U.S. Congress. But the Senate's passage of Senate Majority Leader Harry Reid's (D-Nev.) jobs bill marks a relieving departure from petty partisan debate - this swift action will shift our focus to the needs of America's jobless and give our failing economy the jump start it needs to recover. 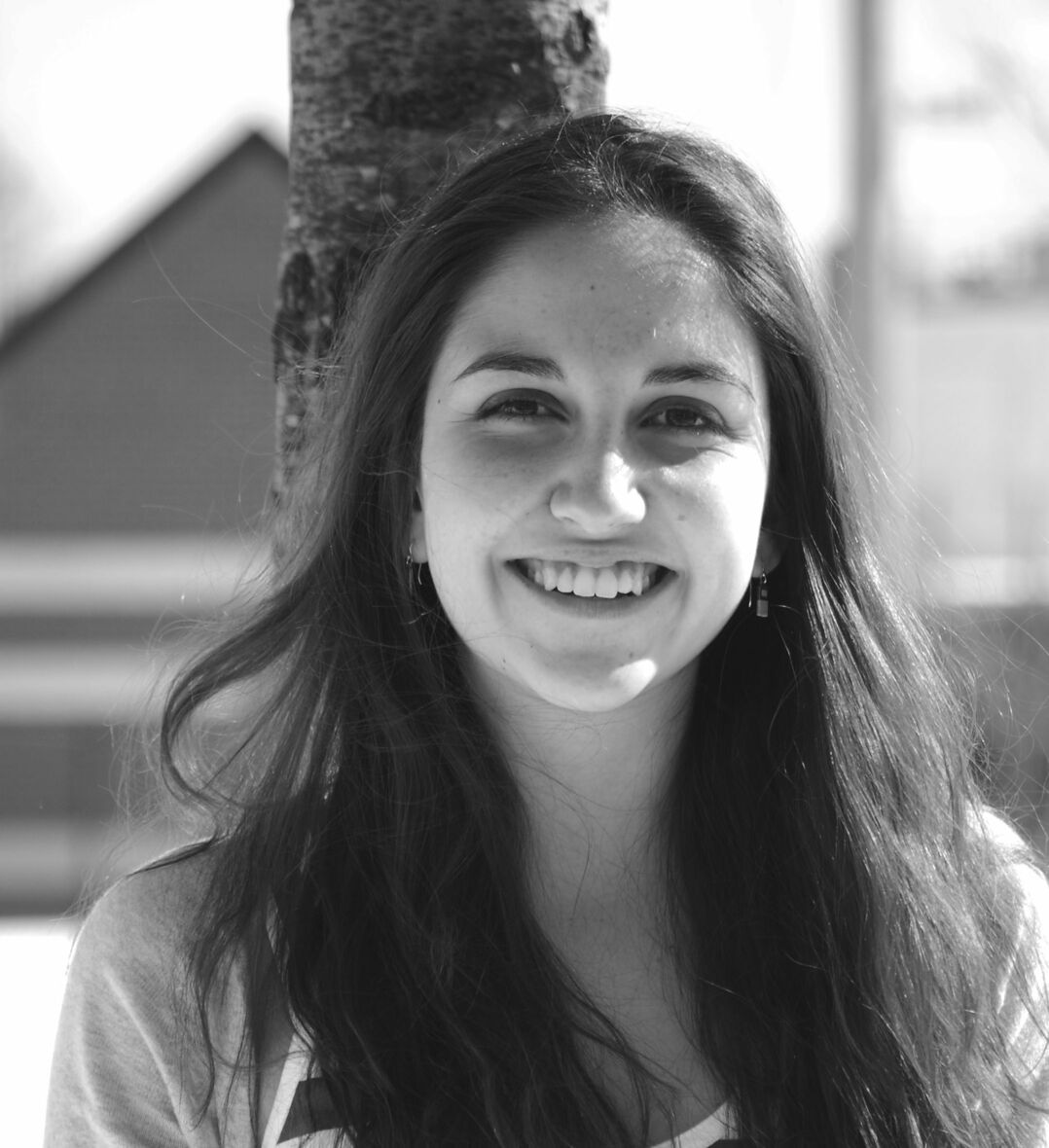 Photo:
The bill itself is a feat of clarity and conciseness that Congress's recent efforts would have a hard time matching. At $15 billion, the bill is not large, especially compared to the $155 billion jobs bill passed by the House this December, but it provides exactly what the economy needs to open up the job market. The four focuses of the Senate version are the following: tax credits to small businesses that will help them afford new hires; money for highway and transit programs; payroll tax exemptions for hiring unemployed workers; and an extension of Build America Bonds, a program that provides funding for local public works projects. In the House, legislators added provisions to change the funding system for the bill and to assist minority contractors. In its current version, each of the bill's provisions serves only to benefit unemployed Americans - our top economic priority.

As of February, the unemployment rate is at a dire 9.7 percent. For Blazers and youth around the country, the situation is particularly troublesome. According to Timothy Bartik, a senior economist at the W.E. Upjohn Institute for Employment Research, the unemployment rate in the year of a person's high school graduation can predict that person's wage rates 15 years later. So if the unemployment crisis isn't solved soon, young people may be hurting economically long after the recession ends. Fortunately, Congress has found a way to overcome the barriers of party preferences - Republicans pushing for less spending and Democrats for more - to create a solution that meets in the middle to address the average American's desire for more jobs, and fast.

All told, the bill's provisions will create an estimated 200,000 jobs, according to Bartik. With funding for highway construction and repair, among other infrastructure projects, the bill will create jobs in construction and related fields, while its other provisions serve companies from all categories. The prospect for recent high school and college graduates to find employment will be improved due to the Social Security tax exemptions for employees who have recently been unemployed. Those who have just graduated and are looking for a first job are the kind of attractive, "recently jobless" candidates that companies hoping to maximize cost-effectiveness will seek out. 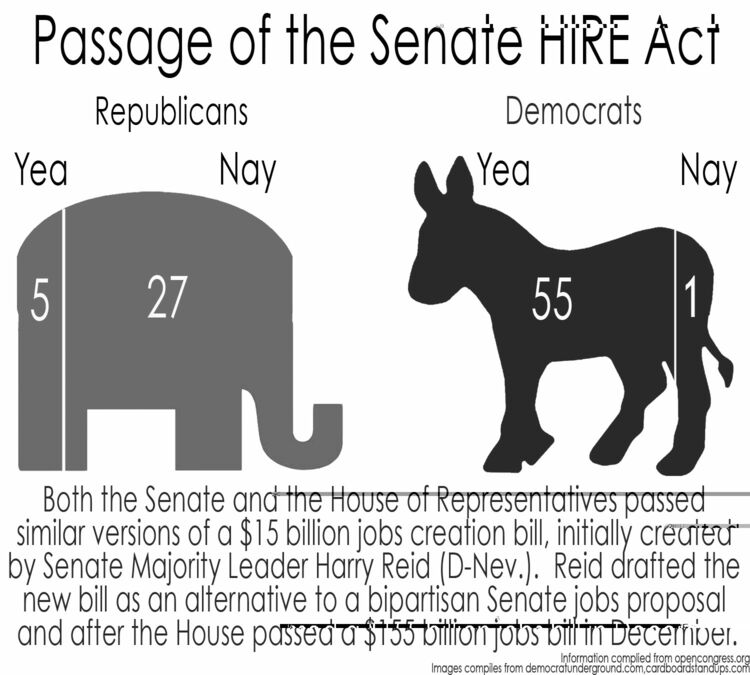 Photo:
The bill wasn't always as effectual as the straightforward remedies it now bears. Initially proposed by Sen. Max Baucus (D-Mont.) and Sen. Chuck Grassley (R.-Iowa), the jobs bill was bloated with $85 billion of other spending measures, among them extensions of tax credits to large corporations. Facing one of the highest jobless rates of the decade, this would have been no solution - Reid's slimmed-down bill is much more apt to target and alleviate unemployment woes than a larger, corporation-coddling bill. Baucus and Grassley's intra-party compromise remains, but the $15 billion draft is a true success in putting the needs of the American people first.

Many conservative politicians, including John McCain, fear that the failure of the original $787 billion stimulus package to act as a magic cure to the nation's economic predicament foreshadows the jobs bill's inability to succeed. But the stimulus kept catastrophic unemployment at bay - without it, jobless rates today would be between 11.5 and 12 percent, according to Bartik. Because of the stimulus's boost to the economy, the new bill's job creation tactics are much more likely to be successful. Companies will surely be eager to make new hires with the prospect of increased consumer demand for their products.

This won't be the last we hear of job creation bills this year - Congress is currently working on several more to build upon the successful recovery effort they've begun with Reid's bill. But as a start to a series of fixes, it's ideal. Most importantly, it will give Americans, especially those of us soon to enter the workforce, faith in our jobs and the future of our economy.

Eli Okun says no: The misdirected bills are too small to construct a real employment solution.

America's jobs are in trouble. We all know it – the "Great Recession" officially ended months ago, but the unemployment rate hovers at 9.7 percent. Last year's American Recovery and Reinvestment Act patched up many sectors of the economy, but job creation remains the most glaring hole. And the prospects are dim for high school students ready to enter the workforce within the next several years. 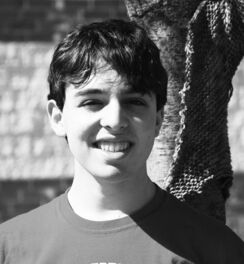 Photo:
So when Senate Majority Leader Harry Reid (D-Nev.) shepherded a 'jobs bill' through his chamber on Feb. 24, it attracted broad bipartisan support, passing 70-28; the House approved a similar version 217-201 on March 4. But the bills are far from the answer to our employment woes. Congress is wrong to settle for such an inadequate pretense of improvement.

Of the bills' four components, one is flawed and the others do not do enough to resuscitate American employment. Congressional Democrats, along with some Republicans, killed the House's original Jobs for Main Street Act last week in favor of the Senate proposal. Unfortunately, their option won't truly slash unemployment, and the ramifications aren't pretty for students or the nation.

The political background is simple: Frightened by the political prospects of a large price tag, Reid crafted a series of modest bills, and the House followed suit. But both chambers focused their bills around an ineffectual $15 billion package that offers tax incentives for small businesses to hire unemployed people.

Reid's bill neglects a variety of ways to generate new jobs for young people. The options were obvious – some measures in the House's original bill, like $4.1 billion for school renovation grants and $700 million for AmeriCorps and Youth Summer Employment expansion, would have provided a major boon to job-seeking youth. But Congress didn't include such assets in its latest national job creation plan. And that's a major problem when the unemployment rate for 16-to-24-year-olds who haven't graduated high school is at a whopping 30 percent. As high school students, we need to be concerned. According to Judy Conti, the National Employment Law Project's federal advocacy coordinator, people often become trapped in initial careers for the rest of their lives; as we enter the workforce in the next several years, we must have opportunities to launch successfully. There are advocates and states pushing for more youth employment money to fund career training and job placement programs, especially for high school dropouts, Conti said. Such funds would aid disadvantaged youth. But the idea hasn't quite caught on in Congress yet.

Omissions aside, the tax breaks are deeply flawed. Most corporations won't hire new employees just for the tax cuts – they need people to buy products before they expand workforces. And even for those who take the money, according to Conti, the tax credit would only save $6,000 annually per person and only apply to people who make under $100,000. "People are going to realize a very, very small percent of savings as a result of the tax incentive in this bill," Conti said.

And the bills' other three components are just first steps. Even if the Senate follows the House's lead and extends unemployment insurance and other social safety net programs, there remains a plethora of opportunities that Congress has passed over.

One particularly gaping void mars the bills: state fiscal relief, a priority that the House recognized in its original bill. Fiscal relief would alleviate the financial burdens of state governments stretched too thin by dispersing emergency funds to save jobs of teachers, police officers and firefighters, according to Daniel Weiss, the chief of staff for Representative George Miller (D-Calif.), an architect of the House's original legislation and the chairman of the House Education and Labor Committee. These jobs' vitality makes fiscal relief a crucial component of the proposal Congress should have retained.

Ultimately, our focus should be national unemployment reductions, but a timid legislature has blunted that ambition for now. Weiss put it best: "One of the main differences between what the House has done in December and what the Senate is doing is the total number of jobs that would be created." Congress should reevaluate and enact better measures. If we forgo politics for progress, we might narrow that gap.