Composer Paul Lewis and soprano Sharon Elizabeth visited Blair as part of a residency program from April 28 to May 3. The visit, which a Wolf Trap Grant for High School Performing Arts Teachers in the D.C. metro area funded, allowed Lewis to work with music students in the classroom, conduct a concert of his original works and present a lecture for Blazers. 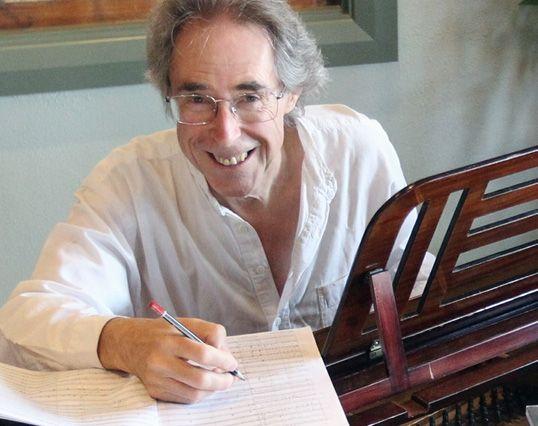 Photo: Paul Lewis, a British composer known for his scores for television, acted as Blair's composer-in-residence for a week.

Photo: Paul Lewis, a British composer known for his scores for television, acted as Blair's composer-in-residence for a week.

A major purpose of the project was for Lewis, who came from the United Kingdom with Elizabeth, to teach the Blair orchestra a new piece of music he had composed. The 19-minute piece, called "Salute the Silents," is a five-movement tribute to silent films, with each movement representing a different genre of silent film, according to Blair music teacher Michelle Roberts. The orchestra premiered the piece in a concert conducted by Lewis on May 1, marking a rarity in the music world. "New music is usually premiered by professional groups, but the fact that a high school group got to premiere it is pretty amazing," Roberts said.

Lewis's visit also included a May 2 lecture during third period, which was open to the entire school. "He talked about music selections and music excerpts and how they fit on TV shows and movies, as his music has been used in many British TV shows and movies like 'Monty Python is the Meaning of Life,'" Roberts said. The residency culminated in a performance with the jazz band on May 3, who accompanied Elizabeth's singing. Throughout the week, the pair came to jazz band classes to help them rehearse for the concert.

According to sophomore violinist Audrey Estelle, the most valuable part of the visit was receiving Lewis's feedback. "When he got here, he wanted to get right to playing his piece so we played through the whole thing and afterwards, he made critiques and told us how he envisioned it being played. But he was really nice and friendly and open to ideas from us, too," she said.

This interaction with the students was Roberts' primary motive for the residency. "He was giving them a composer's perspective and interpretation of the piece, which was great for the kids because they were getting to interact with a live composer which doesn't happen very often," she said, adding, "The whole experience of them being able to get direct feedback in their playing from the person that actually wrote the music was really cool."

Estelle's favorite part, however, was premiering Lewis's piece, although at first she was intimidated. "It was very fun and cool to know it was us who would be premiering it, and nerve-wracking because we all really wanted to impress him," she said. "But it was definitely the experience of a lifetime."