Teachers lobby in Annapolis to keep their retirement secure

The crowd is packed, not a single individual is able to move his or her arms freely. Buses line up as teachers wait for their opportunity to disembark. The noise from the crowd is overpowering and it becomes increasingly harder to hear as teachers attempt to communicate with each other over all of the chanting.

The event was the Rally to Keep the Promise, and teachers wanted to share their opinions with state representatives before they ran out of time. Teachers from all over Maryland gathered together in Annapolis on March 14, and their message was clear: do not take away the pensions and hard earned money for which teachers have dedicatedly worked.

Cutting down to the bone 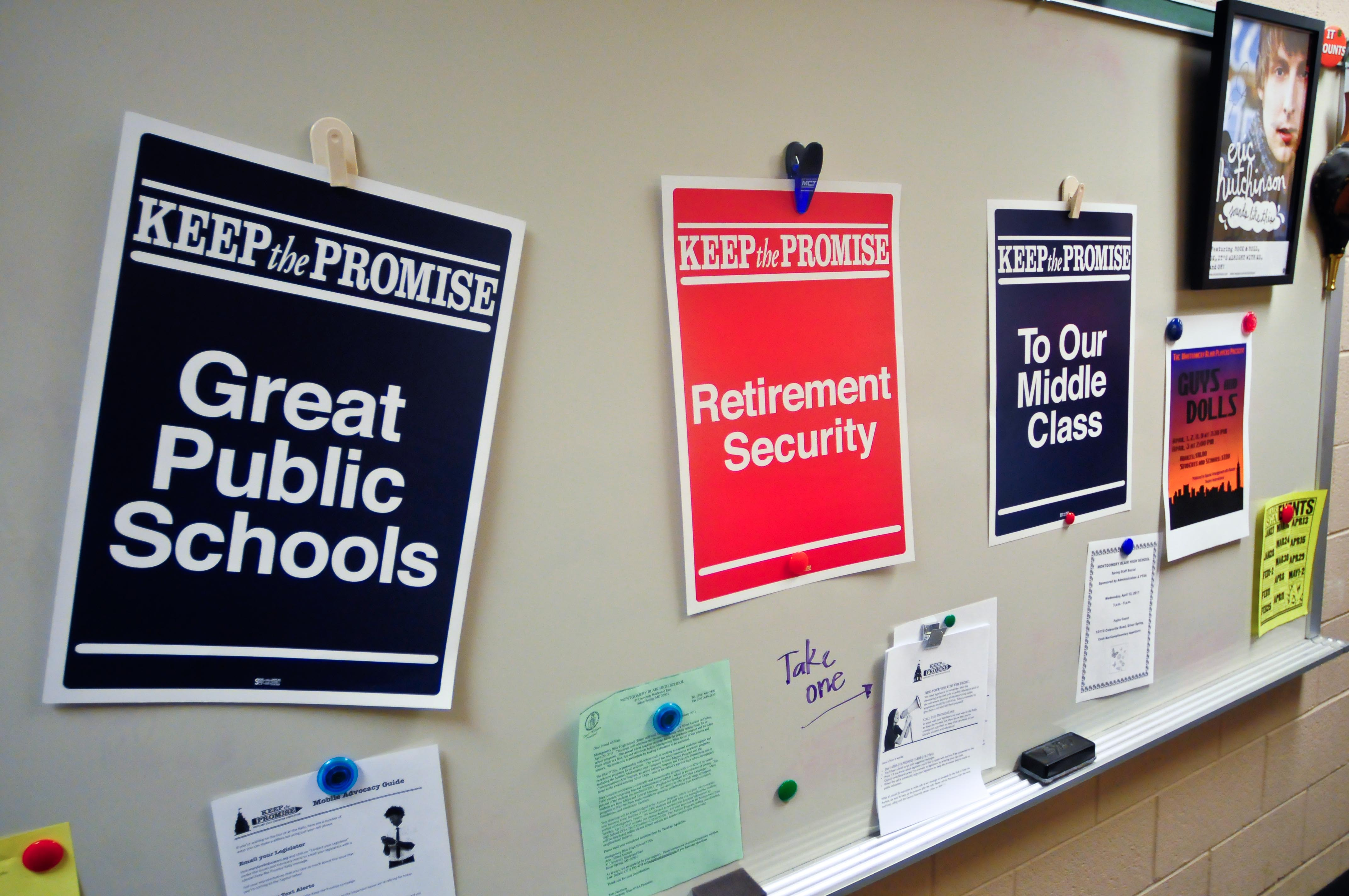 Photo: MCEA posters line the walls of the English office.

Photo: MCEA posters line the walls of the English office.

In 2006, Governor Martin O'Malley made a promise to the Montgomery County Education Association (MCEA) and the Maryland teachers' union that he would boost state employee and teacher pensions. According to social studies teacher and union representative Marc Grossman, O'Malley and the General Assembly of Maryland then went back on that promise this past year, which meant that the Maryland State Government would cut teacher pensions and other resources that teachers are normally given in order to decrease the state deficit.

Rally attendee and English Resource teacher Vickie Adamson was especially moved by the cuts to teacher pensions and benefits, because she believed the cuts would deeply impact the retirement security of hard working teachers that had accumulated years of quality service in Maryland. According to an MCEA pension proposal written up after O'Malley reneged on his promise, the MCEA wanted to urge teachers to follow a proposal created by the MCEA. The association also asked that the teachers continue to voice concerns to elected officials that the teachers collectively stood behind the MCEA's ideas on retirement security.

According to a MCEA press release on March 23, MCEA Executive Director David Helfman wanted to come to a solid compromise that would ease the concerns many teachers had concerning the cuts. "We promised the governor that we would structure a solution that would match his savings and enjoy the support of our membership,” Helfman said. "We encourage the General Assembly to embrace this solution so we can move together as one Maryland."

"If your voice is silent, how can people hear you?" That was the question posed after travelling to Annapolis on the 14th. Adamson said that she attended the rally because she was deeply concerned about the number of budget cuts made in the education committees of Maryland's General Assembly in the last few years. "There are lots of ways to save on money…but it should not be on the backs of teachers," she says. "We've already taken a number of cuts and forgone salary increases for the last two years." 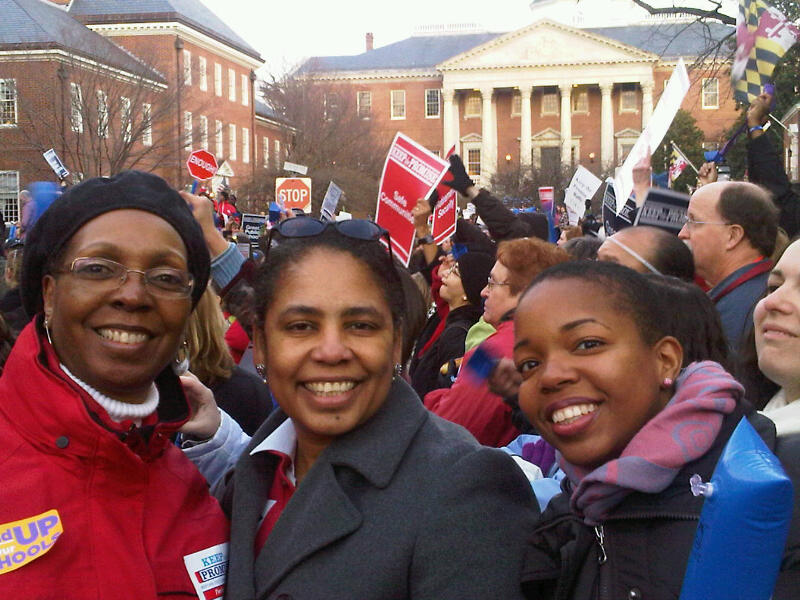 Photo: Adamson, along with English teachers Michelle Edwards and Pamela Bryant, attended the Rally to Keep the Promise in March.

Photo: Adamson, along with English teachers Michelle Edwards and Pamela Bryant, attended the Rally to Keep the Promise in March.

Adamson strongly believes that the state government is forcing the education systems to take budget decreases that in turn affect both the teachers and students. "Teachers can't keep being the ones to pay for the deficit," she says. "If the budget cuts keep occurring, then the quality [of the system] will not be maintained either."

With national events like the Wisconsin teachers' union crisis occurring around the same time of the March rally, the cuts in education budgets have been brought to light in a stronger form; this newfound attention on teachers' rights influenced social studies teacher Anne Manuel. "I was largely motivated to attend in reaction to the events in Wisconsin and the general anti-union mood in much of the media," she says.

It's not over yet

Although the rally was over a month ago, the need for action has become stronger than ever, according to Adamson. "The problem is still going on… the rally was a visible sign of teacher unity and solidarity, but we still have to make the issue more known," she says.
After the protests on March 14, a legislative committee voted to restore $58 million in funding that was originally left out of the Governor's budget.

However, according to a MCEA press release in March, the addition of the $58 million does not affect pension issues and slashes in benefits. There are several ways that teachers, parents and even students can help the MCEA and the teacher union – ways to take action were detailed on flyers from the rally. The MCEA recommends calling "The Promise Line," (1-888-216-PROMISE) to speak with legislators about the issue at hand. Though the Maryland General Assembly session closed on April 11, the MCEA hopes that people keep calling and raising their voice in order to help teachers keep their retirement plans secure and maintain the quality of the Maryland education system.

Both Adamson and Manuel believe that the rally was both rewarding and necessary in order to show the unified force of the teachers in Maryland. "I was really proud, " Adamson said. "It was an amazing gathering, very well organized and gave such a positive feeling in a time of anxiety. "