Evening at El Golfo doubles as a fundraiser for After Prom

Tuesday evening, members of the Blair community had a chance to meet and greet new principal Darryl Williams at a PTSA-sponsored fundraiser at El Golfo restaurant from 5 to 10 p.m. Twenty-five percent of all proceeds went towards this year's After Prom event. 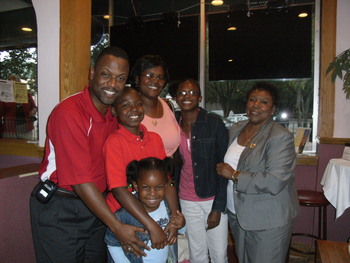 Williams sat near the front of the restaurant and greeted all that entered the restaurant with a smile. The diverse crowd included incoming students, student teachers, parents, a former PTSA president, families, and even parents of alumni.

The incoming principal also expressed his pleasure at the impending start of the school year, and was pleased to get to know more of the Blair community. He described his goals for the evening as "to enjoy it, and to get to meet as many people as possible."

Williams found the evening with Blazers to be very comfortable. "They've been very welcoming and supportive," he said of the Blair community. "It's nice for me to get to meet them, and it's great to see families coming out for a good cause – the After Prom."

Williams was also very supportive of the fundraiser and the PTSA's cause. "After Prom is a great opportunity for students to leave prom safely," he said, emphasizing the need for a safe environment for the students. After Prom is an event organized by the PTSA each year as an alternative for student-hosted parties after prom. "It's a very costly event that ranges from midnight to four or five in the morning," he added. "It's great that the PTSA has established this fundraising activity."

Williams's family – his wife, mother, two daughters, and son – attended the fundraiser with him. He frequently interrupted his dinner to greet and shake hands with newly arrived Blair students and parents, and to introduce his family to various members of the Blair community.

Many people expressed delight at meeting the new principal, and had nothing but compliments for Williams. PTSA volunteer coordinator Beth Martin was pleased with the turnout and the events of the evening. "It was great that [Mr. Williams] was here, and he seemed to have a good time. Everyone seems to be really thrilled to have him on board," said Martin.