Williams responds to questions and concerns from parents

On Monday evening, community superintendent Heath Morrison introduced Blair's new principal, Darryl Williams, to Blair's PTSA for the first time. The principal discussed his plans and vision for Blair's upcoming school year in the question-and-answer session held in the SAC at 7:30 pm. 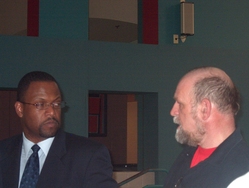 Photo: Williams spoke to parents individually after the PTSA meeting.

Photo: Williams spoke to parents individually after the PTSA meeting.

Williams focused primarily on the need for communication among students, staff, parents and the community, based on his experiences at Gaithersburg High School and Farquhar Middle School. In his first week as Blair's principal, Williams met individually with PTSA co-president David Ottalini, CAP Coordinator John Goldman, Magnet Coordinator Dennis Heidler and each department's resource teacher.

For the upcoming school year, Williams plans to use Pinnacle and Edline to increase communication among parents, students and teachers. Williams also encouraged parent and student participation in Blair's sports programs and planned to speak to the SGA about increasing spectatorship at Blair's games. "It's so rewarding when you go to events, and you see so many students there," Williams commented.

In addition, Williams expressed the need for interpersonal relationships in school. At Gaithersburg and Farquhar, Williams explained, he often spoke to students in the hallways and personally addressed them daily through morning announcements. By being a visible presence in his school, Williams believes he can motivate students to work harder. He hopes to encourage students to sign up for more difficult classes by building a support system between the staff, especially the counselors, and students.

Williams wants counselors to build real relationships with students in addition to their other responsibilities. Data from Blair's 2006-07 school year, he explained, indicated that each counselor had approximately 20 students who failed multiple classes. To alleviate this issue, "we have to work smarter with all students," Williams said.

The new principal also discussed the possibility of losing a counselor at Blair because of the decrease in Blair's population from 3,000 to a projected 2,700 in the 2007-08 school year. Morrison explained that the number of students enrolled determines the number of staff, and a decrease in population would likely place teachers on the involuntary transfer list. "It's not a loss; it's just a redistribution," Morrison said. However, he added, a decrease in enrollment would not affect programs not directly tied to the size of the student population.

Williams promised to contact the MCPS Central Office when he receives firm numbers on Blair's enrollment. "I know the system; it's about the money," said Williams, who had worked as an executive assistant at MCPS's Office of School Performance before his tenure at Farquhar.

After the meeting, Williams entertained individual questions from parents, and many were pleased with the new principal and his plans for Blair. "What you saw tonight was someone with a lot of energy and wants to talk to as many students as he can," PTSA President Ottalini said.