The PTSA installed two answering machines last week to play back InfoFlow in hopes of improving communication between parents and the school, according to PTSA co-president Dave Ottalini. The machines have been fully operational as of Monday and can be reached at 301-649-2893 (English) and 301-649-2833 (Spanish). 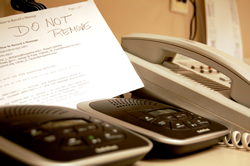 Photo: Answering machines that play back InfoFlow are now operational and can be reached at 301-649-2893.

Photo: Answering machines that play back InfoFlow are now operational and can be reached at 301-649-2893. Photo courtesy of Alex Lutz.

The machines will also convey information in emergency events in the school or surrounding area. "If there is something going on at school – let's say a lockdown – the parents would also call and the administration would put info on those lines as another way to communicate," Ottalini said. "[The machines] are not perfect, but they give parents the ability to be proactive."

The BNC web site airs InfoFlow daily, but the PTSA was concerned that not all families have Internet access. Ottalini spearheaded the answering machine idea because he felt that phones would be a better way of communicating with the Blair community. "Everyone has a cell phone or hard line telephone," Ottalini said. "So if they want to know what's going on at Blair, they can call any time to get a one minute message."

One machine provides an English recording while the other does playback in Spanish. Other languages were considered, but the one-minute time limit per machine restricted the amount of information that could be conveyed if there were multiple languages on one machine. "If there is demand for another language we can work something out," Ottalini said.

The machines will only accept incoming calls and messages cannot be recorded.