Punching through the pandemic

What it's like to take karate classes during the pandemic

For the past 11 months, karate schools in Montgomery County have been subjected to the law of nature: adapt or die. In order to comply with the county's health mandates, some karate schools moved their classes online, while others opted to do a hybrid of virtual and in-person instruction. The pandemic has had a profound impact on martial arts schools by temporarily shifting most schools away from their tradition of sparring: controlled fighting using protective gear.

At Kaizen Karate, a school with locations in Md., Northern Va., and D.C., classes have been completely virtual since March. Since most students lack a training partner for sparring, virtual training has a heavy focus on technique, physical conditioning and drills. Kicks Karate, a school with locations in Montgomery County and Frederick County, has held a mix of in-person and virtual classes during the pandemic.

For many athletes, not just martial artists, the pandemic has required a similar shift in mindset. Instead of competing in tournaments or scrimmages, athletes are going back to the basics, building up their fitness and skill so that when it is safe to compete, they'll be better prepared than their competitors.

Moving up the ranks 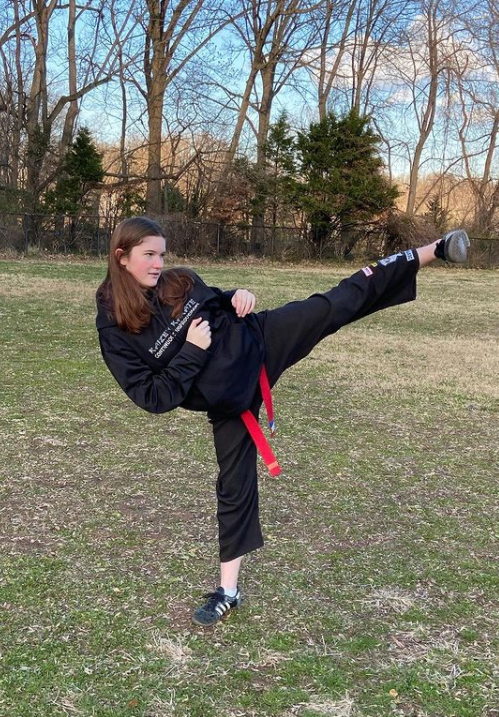 Photo: Nina Hanisco throws a side kick during an outdoor training session (courtesy of Nina Hanisco)

Photo: Nina Hanisco throws a side kick during an outdoor training session (courtesy of Nina Hanisco)

For Nina Hanisco, a senior at Blair who trains at Kaizen Karate, the transition from in-person sparring to virtual training was far from smooth. "At first, I really did not like the idea of online classes… I remember the first week, I pretty much didn't show up to a single online class… I really wanted it to be in-person [training]," Hansico says. However, her goal of earning a black belt before she goes to college has motivated her to settle into routine. Now, she trains six days a week-- virtually--for at least an hour a day. For most students at Kaizen Karate, the process of earning a black belt takes, on average, eight to ten years of consistent training. Hanisco is now several months away from earning her black belt.

Colin Murphy, a senior who holds a third-degree black belt at Kicks Karate, has done a mix of in-person and virtual training since July. During that time, he managed to move up from a second-degree to a third-degree black belt, which required him to go to several in-person classes. "I wore the wrong kind of mask for the first day [of class]... and the mask kept getting sucked into my face every time I tried to breathe, so there was a learning curve… If I hadn't practiced at home with a mask before my belt test, I would have just failed the test," Murphy says.

Benefits of taking martial arts during the pandemic 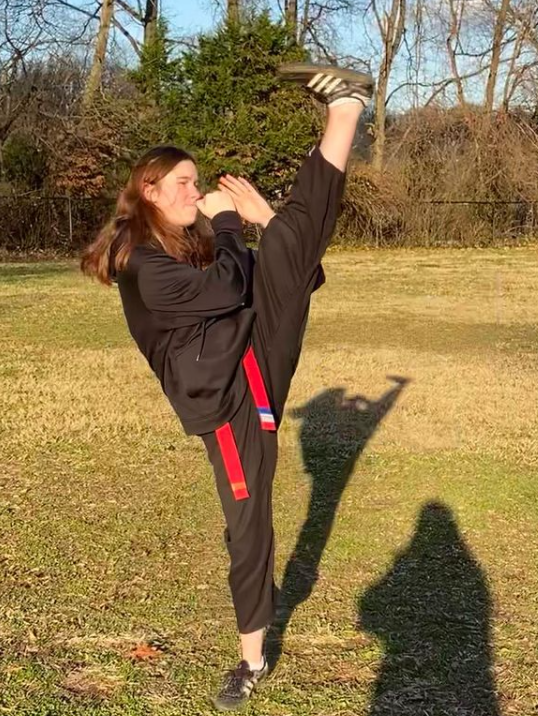 When he applied to colleges, Murphy took time to reflect on where his training had taken him since he started karate all those years ago. "I've written about this for pretty much every college application… karate made me who I am today… There's just so much focus placed on developing respect, self-discipline, self-control," Murphy says.

Although she misses the competition, Hanisco has come to enjoy the daily grind of virtual training. It allows her to learn more of the kata, a series of moves that every student at her school learns before black belt. "I miss the competitions and all that… because I'm a very competitive person, and that was something that really motivated me to train, but I still get to participate in classes and improve my kata," Hansico says.

Training in martial arts through an online platform like Zoom or Google Meets takes adjustment, but it has several advantages compared to in-person training. For one, students can train more times per week since they do not have to commute to and from class. Additionally, if students have the proper camera angle, instructors can pay closer attention to the technique of each student during group classes. Conversely, students are able to have a better view of the instructor during demonstrations.

Above the physical benefits of training, karate takes the mind off of the stress of pandemic life; it becomes a moving meditation of punches, kicks, and blocks. The shift from traditional in-person sparring to virtual training has shown that it is possible to do at least some training from the comfort of one's home. While it is no replacement for sparring, virtual training has served an important role in keeping the martial arts community intact through the pandemic.