Putting the fun in fundraisers

Blair teams think outside the box to raise money and spirit

Junior Lily Ross is an artist under pressure. The clock ticks as she paints stripes of gold and purple between square slices of wheat. A member of Blair's Pom Squad, Ross, tripping over loaded utensils and swerving between globs of jelly, is leading a PB&J sandwich-making marathon to raise money for the upcoming year.

Low on cash but high on creativity, poms, as well as cross country, are among a small population of Blair sports teams choosing a path to profit unique from the typical penny drive or pizza sale.

The cost of equipment and gear makes fundraising an integral part of being a pom. "Poms is a really expensive sport," says Ross. "You can easily spend $500 per year on leotards, pants, shoes and more." 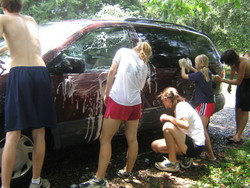 Photo: Cross country team members scrub away before running off to serve their next clients. Like the Pom Squad, the team showed their creativity in fundraising. Photo courtesy of Johanna Gretschel

Photo: Cross country team members scrub away before running off to serve their next clients. Like the Pom Squad, the team showed their creativity in fundraising. Photo courtesy of Johanna Gretschel

Ross coordinated the PB&J fundraiser, which took place on Monday, Aug. 27 at senior Janine Charlery's house. "We knew we wanted to do a community service project and a fundraiser, so we decided to make peanut butter and jelly sandwiches to donate to Shepherd's Table," Ross says, referring to the Georgia Ave. shelter and food bank.

The 14 poms participated in a five-minute sandwich-making contest. Each member asked sponsors to pledge a certain amount for each sandwich they made. "We tried to encourage between $.01 and $1," says sophomore Julia Wynn.

The girls had a blast concocting the classic kitchen staple. "It was pretty hectic because we took it really seriously," Ross describes. In five minutes of messy madness, each pom had made 10-15 sandwiches, but decided to keep going until the squad used up 17 loaves of bread. They ultimately donated around 300 sandwiches to Shepherd's Table. "We made a difference," Ross says proudly.

The sponsor method was frustrating to organize, Ross admits, because some teammates had trouble recruiting the required 10 donors. In the end though, everything came together. "A lot of people were extremely generous," she says, "and gave up to $20. Blair families are great; they always want to help Blair teams."

Ross collected $85 from her sponsors and estimates another $50 per squad member. But the results of the fundraiser extend beyond cash value. "It was a great bonding experience," she says, especially for their three new members – among them Wynn and her twin sister Rose. "It was a fun experience because there was this really fun competitive edge, but also because it was for charity," the latter says.

After rallying in the kitchen, the team is confident about their chances on the dance floor. "We're just like family," Ross says, gleaming.

Cross country head coach Charlie Demma is not one to obey conventional standards. In July, aiming to do something characteristic of the team's notorious spirit, Demma put his idea of a "running" car wash into action. "We're a cross country team," Demma says. "We don't have to sit around on a street corner to make money."

Instead of a car wash at a local gas station, the team ran around the Woodmoor neighborhood and personally delivered car washes. "We got people to commit to wanting their car washed on a Saturday morning," says Demma. "All they had to do was pull a hose out. We ran to their house with buckets, soap and tire shine."

The team's captains had spread the word around the Woodmoor area a week earlier by going door-to-door and asking residents to sign up for a certain timeslot, according to senior co-captain Vijay Baharani.

About fifteen runners, including prospective new teammates, ran for a total of two hours and roughly three miles from house to house. "I had to run 5 miles because at the very end I ran to [social studies teacher] Mr. Moose's house," Baharani says.

The team made a pretty penny for their miles, yielding a total of $350. Baharani says the fundraiser got rave reviews from clients, who promised to participate again next year; Baharani cites one especially enthusiastic customer who told him, "We've had cheerleaders come by; they only talk about their problems, they never wash the cars right."

Demma hopes to earn a reputation for cross country's out of the ordinary moneymaking techniques. "We're waiting for permission from administration for a few other events," he says, refusing to reveal what these events might entail.

Like the poms, Baharani saw the fundraiser not just as a gold mine but as a team-building exercise. "It got people excited for the start of the season, and it also reminded people who hadn't been running that they needed to get in shape," he says.

With the new season underway, cross country has already exhibited a dazzling display of spirit with everything from boys in dresses to girls in capes and spandex.

Whether slapping jam on bread or scrubbing suds on a front window, the Pom Squad and cross country team are turning a profit and turning heads along the way.