Putting the pal in principal

It was mid-August and Blair seemed empty, except for one solitary man striding down Blair Boulevard. Gazing up at the threshold of the main staircase leading toward the high turquoise ceiling, Darryl Williams stopped in his tracks. Everything was oversized, built to hold the diverse mix of students constituting the largest high school in the county, but without them crowding the halls, its vastness engulfed him. Williams was standing in the midst of the high school which was to become his new home.

On June 25, 2007, the MCPS Board of Education selected and approved Williams as the new principal of Blair. With two years of experience as principal of Gaithersburg High School behind him, Williams has since taken his place as Blair's leader with a new philosophy of enthusiasm, motivation and spirit, with goals for the school's long and short term development. 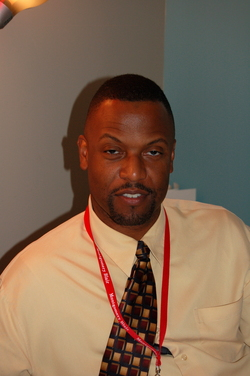 Photo:
The long and the short of it
Nearing the one-month mark from the beginning of the school year, signs of new leadership are visible in every aspect of the school day, from the schedule to the dress code. Inspirational music such as the Jackson Five's, "ABC" greets students at the door as they make their way to their first period class in six minutes instead of the old eight-minute passing time. Lunch is a little bit shorter, classes are slightly elongated and clothes are notably less "distracting."

Williams is at the helm of the changes, and he aims to accomplish more widespread goals for Blair. His biggest prerogative in the short term is to find the root of why students are academically ineligible for after-school activities and address the problem. "We need to find out the root cause of [the problem], whether it lies in attendance or academics and narrow our focus accordingly so we can help these students not meeting at least a 2.0," Williams says.

Thinking ahead to the long term, Williams wants to maintain the high level of national academic performance and recognition that Blair has achieved in the past. His most progressive goal is to establish ties and build partnerships with local colleges and universities to urge all students to explore their options and continue education after high school. "This is not only for the high flying students with a 3.0 or higher, but rather to encourage those students who may be the first in their families to go to college or would otherwise not have the opportunity to attend college," says Williams. He has scheduled a meeting in October to begin this process with Montgomery College.

Not so far from home
While Williams was initially surprised by the likeness between his new and old schools in terms of facility condition and ratio of students enrolled in honors and AP courses, the obvious differences are the sheer size of the school, staff and student body as well as the diversity of the students. Williams says Blair's characteristics call for a unique approach to management.

He stresses that unity among the student body and the staff is quintessential to success. A firm believer in the importance of empowering the staff through collaboration and teamwork, Williams holds weekly staff lunch meetings to work through problems or address school or program-wide issues.

Despite his hands-on approach, Williams contests that he is not a micro-manager. Rather, he has a focused approach that he hopes will impact the school. "I believe in establishing leadership and putting priority on academics," says Williams.

Catering to clientele
Williams has already demonstrated that his top priority is making himself visible to students, as he has appeared on InfoFlow and can often be seen patrolling the halls during passing time. The students, he says, are his main concern and he plans on representing them and looking out for their interests over county initiatives. "My belief is to be an advocate for whatever is best for the students. The students are my clients."

According to Williams, one of the main characteristics of a good principal is the responsibility to represent the school's interests in the county, and he has acted on this conviction by rejecting county policies that would not benefit the unique Blair community.

In one of Williams' first encounters with the SGA, President Molly Martinez and other representatives voiced their concerns about upholding current school policies that the students had worked to implement in years past. For example, though Williams had previously banned iPods and electronics' use during lunch at Gaithersburg, he reconsidered after listening to Blair's SGA, who told him how they had campaigned for this right the year before. "Though iPods weren't allowed at Gaithersburg, I honored what the students and SGA worked for," he says.

For the future as well as the present, Williams wants to utilize the most important resources he has at hand to improve Blair—the students. "The most creative minds exist in the student population," Williams says. "Students today know what's appealing and what works."