Putting up with parking pain

They stop suddenly, with no regard to common courtesy. They give four goodbye kisses and an extra three for good luck. They wait and they wait and they wait. They park in unauthorized areas and block parking spots. They are the worried parents of squeamish students who disembark in the University Boulevard student parking lot.

Many Blazers cite these parents as the traffic problem, while others accuse the road-blocking school buses. But the real issue lies with an administration that has failed to recognize a parking problem that causes unnecessary stress and the tardiness of countless students – a problem that can be solved by opening two lanes, involving security, punishing dilatory drop-offs and encouraging school bus use. 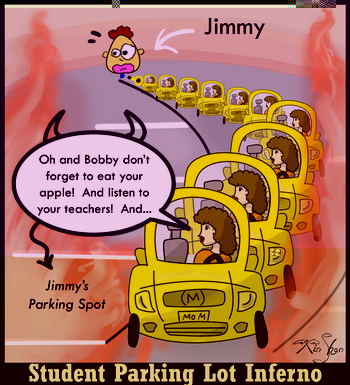 Photo:
A student driver at Blair travels an average of 470 yards to their spot every morning, a ride that junior Rachel Passman refers to as the "longest" quarter mile she drives. Parents often take up Blazers' parking spaces while sitting nonchalantly in their cars to drop their children off at school. Meanwhile, an idle eight feet of pavement remains wasted as two or more empty yellow school buses occupy precious space on the lot's bus drop-off side. There is little for Blazers in this situation to do but wait patiently and hope that maybe tomorrow, skipping a nutritious breakfast, cleansing shower and an extra hour of much-needed sleep will pay off with a timely arrival to their spot and class.

Along the 16-foot wide, quarter-mile entrance to the lot sit two immobile five-ton busesin the valued area "because they are ahead of schedule for dropping kids off and taking kids to Edison," says Business Manager James Funk. As the line of cars drags out of the Blair parking lot blocking the intersection at University, the vacant buses remain motionless. Horns are honked and expletives are yelled; yet the buses refuse to move. With "just an easy phone call," says Funk, the administration could move the buses and split the entryway into two fast-moving lanes, allowing students to move along to their spots and parents to exit the parking lot quickly. This has yet to be done as Funk admits that he "was just not aware it was a major issue."

While the double-lane system would speed drop-offs and cool nerves, the issue of parent interference still remains. As spot-stealers enjoy their newfound space and time, the security guard traffic regulators blissfully drink their coffee, chatting away, giving little thought to selfish parents who wait for their children to reach the double-doors safely. Parents should be forced to move and those who refuse to follow the posted signs and common roadway courtesies should have their youngsters marked tardy. Although this may seem harsh, one must consider the unfairness of a situation in which student drivers are forced to arrive late to class because they must wait for the parents to move, while the dropped-off students arrive in a timely fashion.

The problems do not stop within the parking lot; parents attempting to avoid the long lines have resorted to dangerous spasmodic stopping along University Boulevard. "There is such strict enforcement about regulating cars in the bus entrance, but 50 feet later cars can stop freely along the bustling thruway," said senior Christoff Visscher.

Visscher was recently in an accident along University Boulevard after a parent in front of him stopped on the street without warning to drop off a student. Although the $1,500 incident was costly, quick parent drop offs have resulted in much worse scenarios. One morning in 2003 Patrick Lucas, former student of John F. Kennedy High School, dashed out from his mother's car, just like many Blazers do in every morning, only to be slammed by oncoming traffic; he broke both of his legs. If conditions continue it is only a matter of time until a similar situation occurs at Blair. These hazardous stops could be easily remedied with the movement of buses and efficient traffic enforcement.

The often-proposed solution of moving the parents over to the Colesville Road side may seem idyllic for students but would only increase congestion in an already crowded teacher lot. "The teacher lot is packed as well," said Funk. "The original issue was parents stopping on Colesville to drop of their kids, so we switched sides – now if those kids being dropped off rode the bus, more congestion problems could be fixed." This remedy would remove many of the cars that occupy the two lots, leaving more breathing room and navigating space for both teachers and students. And if the administrators realize that gravity of the issues faced by student drivers and create a two-lane drop-off, the parking problems will see their end.

It all boils down to an issue of effort. The administration needs to switch lanes. It is time to move the stationary school buses, put the security guards into gear, implement a new drop-off policy and encourage school bus transportation.