Cougars defeat Blazers in a 3-1 game

The Quince Orchard Cougars triumphed over Blair's girls' varsity volleyball on Wednesday, evening Blair's record at 2-2. The Blazers started off promisingly, winning the first set 25-18 but lost the last three, 25-16, 25-22 and 25-16. Although both teams were evenly matched, the Blazers fell short due to errors and faults.

The game started slowly for the home team, as the Cougars took a two-point lead on Blair's sloppy technique and lack of communication. As a result, the Blazers were disheartened early on, allowing the Cougars to take a quick 11-1 lead. However, senior co-captain Olivia Bozik delivered three aces in a row, bringing the score to 11-5, sparking a vigorous Blair rally. Soon the tables turned, as the Cougars became prone to errors and their defense succumbed to the Blazers' powerful spikes, handing the first set to Blair, 25-18. 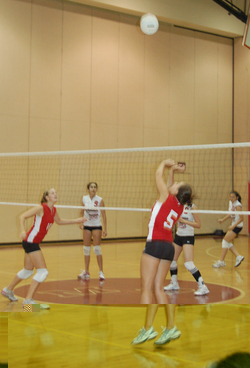 Fresh off their opening set win, the Blazers started the second set strong with a good offense, taking an early 5-1. But when one serve resulted in a net fault, more errors seemed to follow, as Quince Orchard took the lead. Blazers fought back resolutely, conducting impressive saves, particularly one from junior hitter Caitlin Ludington, and forceful attempts at spikes, many of which were skillfully saved by the Cougars, and ultimately, Quince Orchard prevailed, 25-16.

Undeterred, the Blazers quickly pulled in for a two point lead early in the third set, thanks to an out-of-bounds hit by the Cougars and a spike from Bozik. However, the Cougars proved to be as determined as the Blazers, tying the game at 5-5. From there on, the Cougars and Blazers remained toe-to-toe, benefiting from the opposing teams' errors and pulling off spectacular plays, including successful saves by sophomore Sybil Brown and hard spikes from sophomore Kaiti Hague. After tying the score at 22-all, Blazers were thwarted by errors and a failed save as Quince Orchard took the third set 25-22.

In the final set, the Blazers were troubled by innumerable net faults and out-of-bound balls, but retained their competitive edge. The Blazers' drive helped them succeeded with a couple of saves and blocks but they were unsuccessful otherwise. With two out-of-bound hits from the Blazers, the Cougars won the fourth set 25-16, winning the game 3-1.

Despite the team's loss, Coach Heather Amell felt that Blair was a better team overall. "It was] unfortunate that we lost," she said. "Blair was competitive, [our] skills are improving." According to Amell though, the team still needs to work on its communication and "covering the tips."

Ludington too was disappointed that the team could not prevail despite their strong start. "We lost focus and we lost a lot of points we shouldn't have," she said. However, both Ludington and Amell believe that they will succeed in a rematch against the Cougars. "We'll beat them," said Ludington.

The girls' varsity volleyball team plays its next home game against Northwood on Friday Sept. 28 at 6:30 p.m.