The Blair varsity football team (0-2) experienced a crushing defeat at the hands of one of the elite teams in the metropolitan area: the Quince Orchard Cougars (2-0). Quince Orchard (QO) dominated in all facets of the game and set the tone early by jumping out to a 27-0 lead at the end of the first quarter. 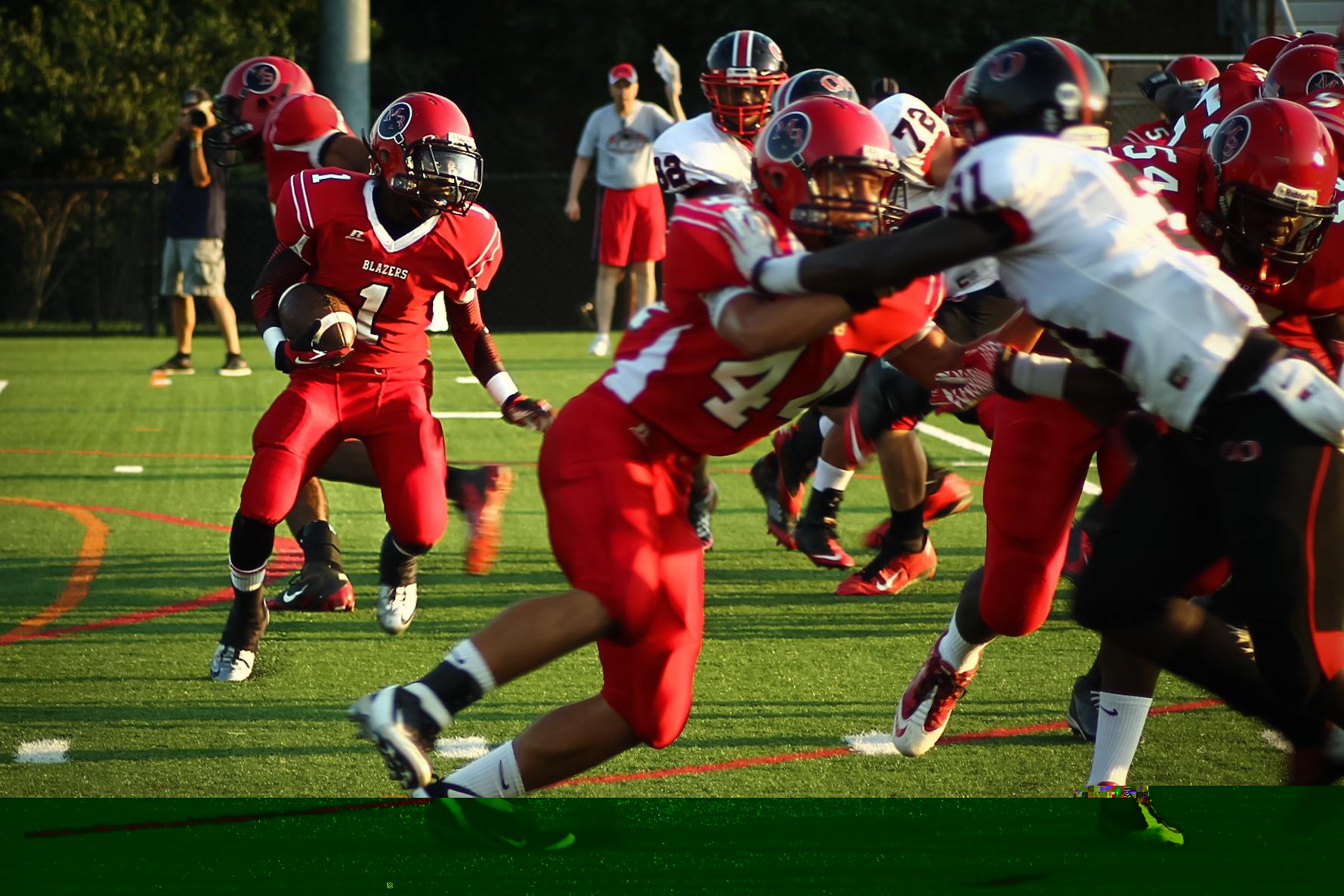 Photo: Blair running back Darryl Blue takes the hand off as the Blair offense failed to score for the second straight game.

Photo: Blair running back Darryl Blue takes the hand off as the Blair offense failed to score for the second straight game. Photo courtesy of Emma Howells.

To start things off for Quince Orchard, wide receiver and defensive back Kyle Gregory returned the opening kickoff for a touchdown, giving his team an early 6-0 lead after a missed extra point. A few moments later, on the second play of Blair's opening drive, Quince Orchard's Malcolm Brown intercepted Blair quarterback Raymond Burtnick. On the ensuing QO possession, RB Michael Kissiedu ran for Quince Orchard's second touchdown of the game. Following the successful extra point, the Cougars led the Blazers 13-0.

While Blair's offense continued to struggle, midway through the first quarter Quince Orchard quarterback Mike Murtaugh completed a pass to wide receiver Elliot Davis for a gain of twenty-four yards, putting QO in the red zone. That set up a four-yard touchdown run by Cougar running back Keano Wilder, giving QO a 20-point cushion with the first quarter still underway.

On the following Blair possession, Burtnick was picked off once again by Brown, who added on to his already impressive stats with the first touchdown catch of the day on a pass from Murtaugh. The undefeated Cougars took a 27-point lead into the second quarter and never looked back as they continued to run over the outmatched Blazers.

To begin the second quarter Blair once again failed to make any progress on offense, quickly handing the ball back to the Quince Orchard offense. This time a long, well-constructed Cougar drive was capped off with an 11-yard touchdown pass from Murtaugh to receiver Matt Choi, putting QO ahead by 34 with the extra point. 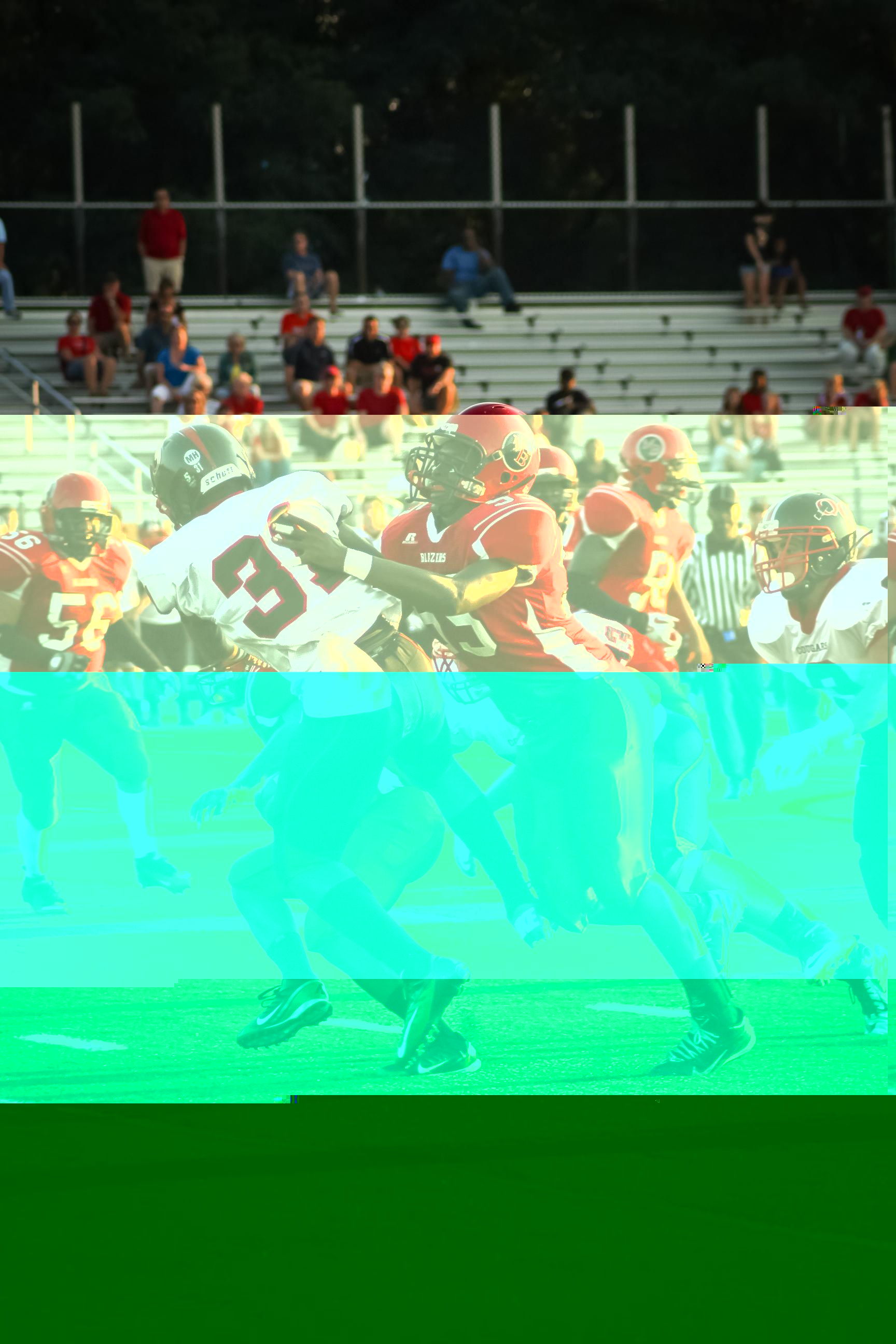 Photo: Blair's defense takes down running back Clay Shelton-Jones in one of only a few defensive stops for the Blazers.

Photo: Blair's defense takes down running back Clay Shelton-Jones in one of only a few defensive stops for the Blazers. Photo courtesy of Emma Howells.

After a quiet third quarter for both sides, the Quince Orchard offense once again saw little fight from the Blair defense with a 12-yard rushing touchdown by running back Manuel Brown capping off the night's offensive barrage. This was the last nail in the coffin bringing the score to 55-0 in favor of Quince Orchard. After two more failed Blazer possessions, the game was over.

In a night when little went well for the Blazers, Burtnick was able to find a bright spot in the team's crushing loss. "We definitely learned a lot, we'll be able to go back and watch tape and identify our weaknesses that they exploited and try to improve on them," he said.

Junior James Taylor thought, in addition to watching the tape, they need to start playing better as a team. "We need to get together as a team more, then we can start winning," he said.

Head Coach Jeff Seals thought the team just needs to put this game behind them. "We got manhandled, you just got to wipe your mind and move on to the next game," he said. "The kids want it so bad, we just have to keep pushing."

Junior Alec Fields felt that despite losing by such a large margin, they fought hard throughout the game. "It's a tough loss; we tried our hardest," he said. "We're looking forward to Wheaton for our first W."

The varsity football team will play its next home game against Northwood on Sept. 29 at 2:00 p.m.