Raising the standard for MCPS in ongoing contract negotiations

Since striking violates Maryland law, educators at Blair show support for education funding in other ways

This Halloween marked the end of a momentous teacher strike that lasted 11 days in Chicago, causing chaos for 300,000 students and their families under the public school education system. For two weeks, classes came to a halt as teachers refused to show up in classrooms until Chicago's mayor conceded to higher educator, social worker, nurse and librarian salaries. In response to the recent uproar, educators across the nation have been discussing teachers' working conditions and the plausibility of striking. 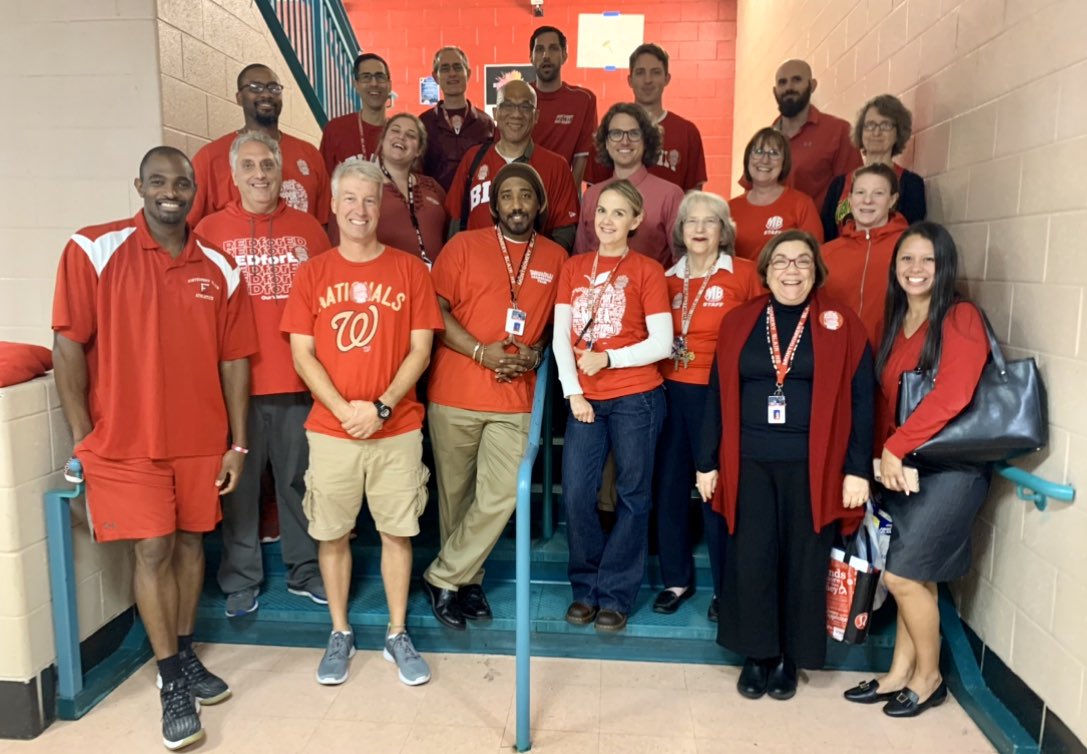 Photo: Blair teachers show up in red gear to support #RedforEd and the Kirwan Commission (courtesy of Renay Johnson).

Photo: Blair teachers show up in red gear to support #RedforEd and the Kirwan Commission (courtesy of Renay Johnson).

While the system in Montgomery County is far from perfect, striking doesn't seem to be on the horizon, as it is forbidden in teachers' contracts and against Maryland law. "Teacher strikes are illegal in Maryland, and while that sometimes has not stopped teachers, we're not going to strike," Blair math teacher David Stein says. "We're better than a lot of states in terms of state funding, but we have a long way to go."

Stein serves as Blair's representative for the Montgomery County Education Association (MCEA), as well as a member of the Political Action Community Engagement (PACE) committee, where he works on the bargaining team. "We're working on creating a new contract for teachers," Stein says, referring to the annual contract negotiations. "Right now, we're in the process of making proposals."

Teachers and negotiators are also pushing for implementation of the Kirwan Commission, a multi-year initiative dedicated to improving the quality of Maryland’s public education system based on the best education systems worldwide, such as Canada and Finland. The commission hones in on qualitative policy recommendations, guidelines for funding increase and allocation and Maryland laws such as Senate Bill 1030 to provide grants. This policy reform aims to better support preschool and underprivileged students, as well as raise the status of teachers.

Even if strikes are illegal, Maryland teachers still press for better school funding at annual protest rallies in Annapolis. Most recently, several thousand supporters gathered at the capital in March 2019 for the "March for Our Schools," pressuring lawmakers to fill the $3 billion annual funding gap that the Kirwan Commission calls for. While the rally did not result in concrete policy changes, the supporters' yearly show keeps public education at the forefront of Senate priorities.

Moose, who has attended two or three rallies, notes that the relationship between the Montgomery County Education Association (MCEA), the union advancing the interests of 14,000 MCPS teachers, and MCPS has been generally neutral. "The protest rallies are all very peaceful and well intentioned," he says. "We try to provide the best services we can, but sometimes that means going to Annapolis and carrying signs."

According to Moose, salaries are one of the main issues that teachers are fighting for. It takes a teacher twenty years to earn the median household income in Montgomery County, with salaries starting at $52,000 per year and capping at $104,000. "No teacher does this job to get wealthy," Moose says. "I'm wearing my Blair t-shirt and my Costco pants and my car's 16 years old— and I love my job— but you need to make enough to purchase a home and raise a family."

Moose is thankful for the guaranteed pension that teachers receive, but he notes that the county is providing successively skimpier plans for new teachers. Currently, three tiers of pension plans exist, with teachers who begin working after 2011 working longer for a smaller slice of the pie. "If you look at the contract, they make the pension plan less attractive every 10 or 15 years," Moose says. "You don't get quite as much, but in today's economy, some people don't have anything guaranteed."

Social studies teacher Anne Manuel mentions that the insufficient salaries and scant pension plans disincentivize potential educators from taking on the job. "Teachers do not make anything comparable to other professions with the same education requirements," she says. "I used to be a human rights activist, and it took me about 17 years of teaching to catch up to what I was earning before."

More than anything, music teacher Isabel Hernandez-Cata wants to see more clarity in the new contracts. Not only are the wordings of procedures extremely vague, the current contract is filled with irrelevant statements that are disregarded in practice. "It's ambiguous to the point where people can twist it to the detriment of teachers," she says. "I really think every word needs to be updated. The contract looks good, but it's not being upheld."

Hernandez-Cata has experienced the adverse effects of an unclear contract firsthand. Despite proving that her Master's degree was a three-year program, the county halted her benefits under academic leave after two years, instead requiring her to pay $68,000 if she didn't return to the job in time. "My benefits were unclear and they were pulled out from under me midway through my master's program," Hernandez-Cata says.

Despite the pay rate, Moose loves teaching and wouldn't trade his job for anything else. "I asked my philosophy class to raise their hand if they know anybody—mom, dad, or Uncle Joe—who doesn't like their job and a lot of hands go up," he says. When choosing a career, teachers have always chosen the joy of raising the next generation of innovators over a raise in pay.

Therefore, Moose finds the arguments against funding for teachers and schools rather amusing, as opponents are essentially preventing better educations for their children. "I think the most important people in a kid's life after guardians are the teachers— they spend hundreds of thousands of hours with them from kindergarten through 12th grade," he says. "Don't you want that person to be well qualified, well compensated, and committed to their job?"

In addition to bolstering salaries, teachers advocate for funding for better programs and resources for students. MCPS hires psychologists to work with students, but they're shared between schools. Thus, these psychologists have no time to meet and get to know students, much less understand their personal issues. "It's not just about the paychecks we get, it's also about the environment that we work in," Moose says. "How can you slice and dice a psychologist? It takes time to sit with kids and talk things out." Especially at Blair, a fraction of a psychologist serving roughly 3,400 kids is far from enough.

Teachers show their support for passing the Kirwan Commission, which poses solutions for many of their complaints, by wearing red on certain days as a part of the broader national public education campaign #RedForEd. "I think it'll put us on the right track," Hernandez-Cata says. "We paid all that money for that study, and now I think we should try to follow through with it."

Blair teachers participate in activism because of the need they see for elevated school environments and resources that benefit both themselves and the students they teach. "Early childhood care, teacher pay and serving underprivileged communities—those reasons provided by the Kirwan Commission were enough to get me to put on a red shirt," Manuel says.