Rallies for reopening businesses are detrimental and dangerous

Across the country, protests to lift stay-at-home orders and reopen non-essential businesses grew in popularity. Generally, protestors are not following social distance guidelines nor are they wearing masks. The logic behind these protests is flawed and they need to be stopped.

For starters, these protestors advocating for reopening states have a much higher chance of spreading COVID-19 since many are not wearing masks nor are they properly social distancing. These protests are simply irresponsible, as they put everyone involved in danger. Ironically, these protests to reopen states could be perpetuating the closure of states. The protests can cause the spread of COVID-19, which would force states to maintain their closed state.

During a Michigan protest, an ambulance was forced to slow down because the protest was in the way of its path. This protest was advocating for stay-at-home orders to be lifted. At this point, the danger goes further than COVID-19. Now, the protests are directly putting people that shouldn't be involved at risk.

A main concern of anti-quarantine protestors is the growing unemployment rate. It’s true that unemployment is rapidly increasing due to the coronavirus, which leads to less consumer spending. Unemployment has soared from 4.4 percent in March to 14.7 percent in April. According to the U.S. Recession Model by Bloomberg, the U.S. has a 100 percent chance to enter a recession within the next 12 months. 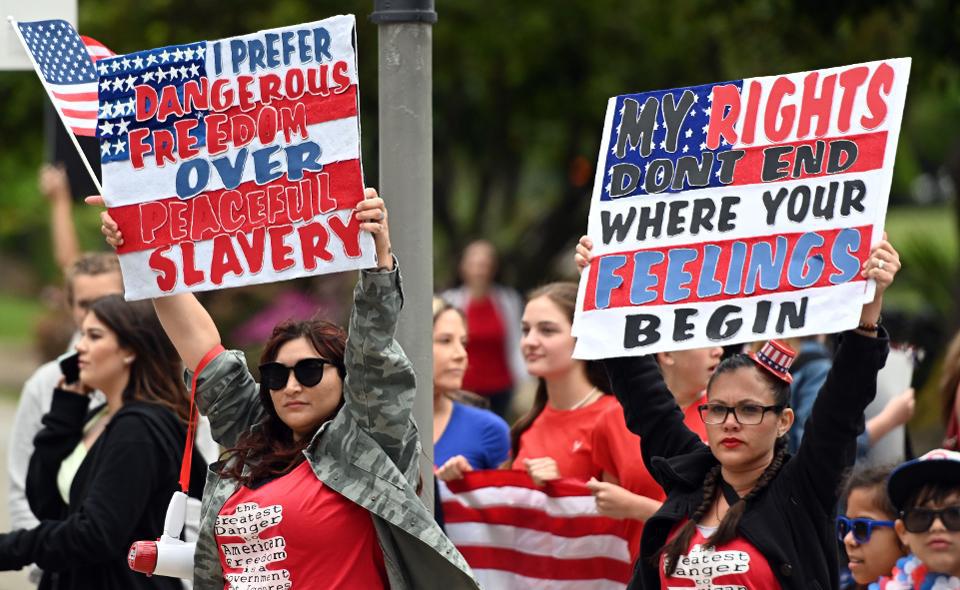 Photo: Photo: Anti-quarantine protests have been becoming more popular around the country (courtesy of Forbes).

Photo: Photo: Anti-quarantine protests have been becoming more popular around the country (courtesy of Forbes).

It will certainly be difficult to revive the economy. The stimulus checks and unemployment payments have been helping a bit with promoting spending, but it's clearly not enough. In this time of economic struggle, banks are using negative rates in savings accounts. This can be helpful for the economy because it would punish people for saving money, so spending will increase. On the other hand, some people may not want to spend their money because they are out of work and have no income.

While this is rightfully a major concern, the U.S. was able to climb out of the Great Depression through unconventional routes in the New Deal. Former Democratic presidential candidate Andrew Yang pushed an idea of universal basic income (UBI), which could help create more jobs, make families stronger, and create a more balanced playing field for Americans in the economy. The UBI proposal can easily be successful by increasing taxes for the wealthy.

Multi-billionaire and Amazon CEO Jeff Bezos is set to be the world's first trillionaire. His current net worth is around 143 billion dollars and it is rapidly increasing as Amazon flourishes during the COVID-19 pandemic. If Bezos was given a wealth tax of four percent, he would pay about 5.8 billion dollars in taxes, which could support another plan like the New Deal or UBI to revive the economy.

Some people of the anti-quarantine persuasion believe that just the vulnerable should stay home to prevent that group of people from getting it. Even if people go out, they can bring it to the high-risk individuals in their home. This is extremely unsafe, as it can never be known who will feel the worst effects or who will be asymptomatic. People shouldn't have to risk their lives just for the economy's revival. In addition, a lot of young people have underlying conditions. Type 2 diabetes has been a common problem for the American youth, as it affects 1 in every 400 Americans aged 20 years and younger, and cases for all Americans increase by 1.5 million every year. There are also undiagnosed conditions that people have, which could put those people at major risk. Therefore, it is irresponsible for protestors to assume who is vulnerable and it is irresponsible for them to claim that keeping the ill and elderly home will be the best solution. Especially in places like New York, a large number of people who died from the virus didn't have any underlying conditions.

Similarly, another flawed argument was highlighted when a man posted a video of his dispute with a Costco employee, claiming that he was not wearing a mask because he "woke up in a free country." A free country also reserves the right for companies like Costco to create policies for the people visiting their private property.

They also contend that the United States never quarantined for swine flu or SARS. However, the coronavirus is highly contagious and more deadly than swine flu or SARS. In the U.S., there have been over 1,720,613 confirmed cases with about 101,573 deaths. It's almost like comparing apples and oranges. According to CNN, swine flu infected 60 million Americans in a year, but it is not nearly as lethal as the common flu. SARS was very lethal, killing 800 Americans, but not nearly as contagious, only infecting 8,000.

It’s not difficult to wear a mask when you go out and keep a proper social distance. It may be seen as an inconvenience, but no inconvenience outweighs the lives of our friends, family, and community. We will be able to get out of this economic crisis if we consider unconventional routes, and we will get out of this pandemic if we can all cooperate to help stop the spread. If the protests for reopening stop, we will get out of the economic drought sooner than later.

In the nationwide George Floyd protests, social distancing and masks have been required and/or encouraged. The George Floyd protests are actually making big steps towards racial justice, whereas rallies to reopen states are counterproductive because they just perpetuate the spread which is causing the economy to remain closed.

The reality of protestors wanting to reopen an economy in the middle of a global pandemic is a sign that some people care more about the economy than one's health. However, protesting is a powerful tool, and rallies that advocate social justice and dynamic change in policing and race relations are urgent. The George Floyd protests are causing change, change that has been long overdue.