When petite sophomore Mindy Or and timid freshman Adam Jackson walked onstage carrying a wooden cot, their presence seemed unimpressive. But when the pianist began to play, Or suddenly sloughed her blank expression and captivated the audience with her strong voice and authentic emotions. Jackson responded with an equally exceptional pitch in their love song, "Sun and Moon," from "Miss Saigon."

The scene from "Miss Saigon" was one of the acts from five plays performed Wednesday, Jan. 11, at New Faces, a show featuring Blazers who have never been center-stage at Blair before. Although the performances could not match the extensive spring musicals in grandeur, the actors and singers showed promising skills that could take several of them to more advanced roles in the future. 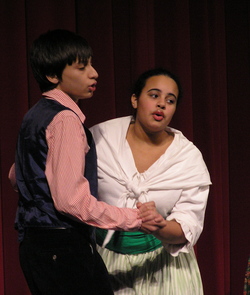 Photo: Juniors Diego Ardila and Rayna Andrews perform in "June is Busting Out All Over" from the play Carousel during the New Faces production.

Photo: Juniors Diego Ardila and Rayna Andrews perform in "June is Busting Out All Over" from the play Carousel during the New Faces production.

Student director of "Oliver!" senior Gu Khalsa opened New Faces with a rough but nevertheless humorous rendition of "I'd Do Anything." Khalsa sang with sophomore Maryam Elbalghiti and freshman Andy Scott. Elbalghiti's clear voice and her playful tone meshed with the comical love song. Scott also acted his part affectively, showing boyish affection for Elbalghiti, though he struggled to hit the higher notes. Following "I'd Do Anything," Elbalghiti maintained her expressive singing in solo "As Long as He Needs Me," yet on some parts she went slightly off pitch.

Or and Jackson glowed next in their emotional duet. The affectionate choreography and their on-pitch voices created the allusion that they were in love. Or also beamed in the next song, "I Still Believe," with senior Hannah Rosen. Rosen's strong voice harmonized well with Or's higher one, and both girls realistically portrayed torn, besotted women.

The next act, from the musical "Camelot," abruptly changed the mood when senior Adina Goldwasser and juniors Carly Groff, Amanda Liebrecht and Leandra Tidwell skipped onstage. The girls' voices mixed well together, and their dance steps in the third song, "The Lusty Month of May," were charming. Several of the girls showed no expression, but this weakness was offset by Tidwell's later solo. In "Where Are the Simple Joys of Maidenhood?" Tidwell created a lighthearted, dreamy mood with her simple eye movements and shy smiles, and her voice belted throughout the auditorium.

Junior Joanna Cross opened "Carousel" with a witty version of "Mr. Snow." Cross's flirty expressions and hip movements brought the song to life, balancing out her mediocre pitch. After "Mr. Snow," junior Diego Ardila and senior Joanne Rogers sang "If I Loved You," a perfomance that could not emulate Ors and Jackson's duo. "Carousel" concluded when the entire ensemble heartily singing, "June is Busting Out All Over," in which Cross and Rogers' jolly tones helped remedy the dull scene before.

New Faces ended uniquely with musical adaptations of the songs in "The Lion King." Senior Chauncea Carothers sang "They Live in You" a cappella, backed up by periodical background chants from the ensemble. Carothers's confident presence and powerful voice put spirit into the piece. Junior Naod Yiman and sophomore Amelia Hessey sang a cutesy version of "Can You Feel the Love Tonight?" although some notes were slightly off key.

The entire New Faces cast joined "The Lion King" ensemble in a forceful rendition of "The Circle of Life" to conclude the performances. Senior Kacheve Stafford's deep tone and the energy of the other singers ended the show on a high note.

Inconsistent performances and rookie acting are to be expected in New Faces. But Or, Jackson, Tidwell and Stafford were several of the stars that kept the show rolling. Many Blazer stars first perform in New Faces, said sponsor Kelly O'Connor when she introduced the musicals. "It's a good jumping off point," she said.