"Dunk of the Year!! @blakegriffin just dunked on Kendrick Perkins so hard!! Wow!! I guess I'm #2 now. Move over #6," LeBron James tweeted on Tuesday. The dunk to which the two-time NBA Most Valuable Player was referring to took place in the third quarter of a blowout of the Oklahoma City Thunder, at the hands of twenty-two-year-old Blake Griffin and the upstart Los Angeles Clippers on Monday night. The Kendrick Perkins whom James describes suffered the full wrath of Griffin's 250-pound frame. And the "Wow!!" experienced by James was felt around the world as high school students and television pundits alike freaked out over the slam.

The day before Griffin became a trending topic, James provided us with a "Wow!!" moment of his own, jumping over (and I mean over ) Chicago Bulls guard John Lucas III to finish a devastatingly skillful one-handed alley-oop . 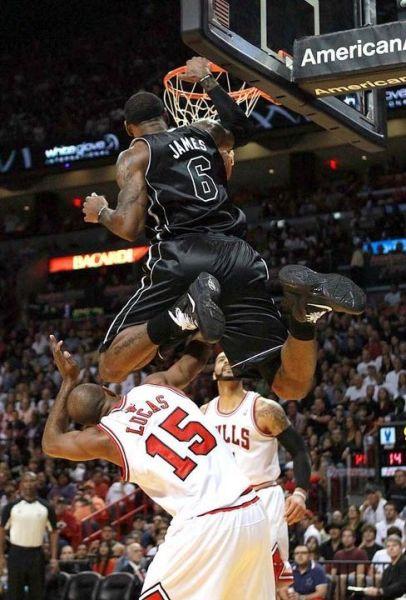 James's and Griffin's dunks were sandwiched by two alley-oops completed by Oklahoma State guard Markel Brown, the first of which he followed with trash talking that would get him ejected from Oklahoma State's upset of Missouri, and the second of which was made great by a precise dime off the glass , courtesy freshman Le'Bryant Nash.

So what about those critics who claimed that the golden age of dunking was over? Those critics that said we had seen it all before, and that the slam dunk contest was boring (which it was for a while, before the heightened creativity and showmanship of the past couple years)?

The dunks we saw from Brown, Griffin and James were special, and they were special in and of themselves, no hyped-up All-Star Saturday event necessary. The players captivated us without capes, without cupcakes, without cardboard cut-outs, without choirs and without Kia's. Because they had something that no dunk-contest entry ever will: spontaneity.

Take LeBron. He took off before Lucas III got in his way and was already airborne when the defender got in position. By then it was too late to change course, so all the seven-time all star could do was lift his diesel-powered legs as high as he could, managing to jump clear over the 5'11" guard and still keep his eyes on the ball and finish. Whenever we see a slam dunk contest participant drag a teammate onto the court and position him under the basket, we know exactly what's coming. We have seen it before, and the dunk loses value as a result, both at the at the scorers' table and in our hearts. But nobody watching the Heat-Bulls game, just seven minutes into regulation, could have predicted that James would attempt to jump over a defender to catch a lob in a regular season game . Yet the dunk did happen and has still been eclipsed by Griffin's.

John Lucas III is no runt. He stands 5-11 and weighs in at 165 pounds. But he would be dwarfed in comparison to 6'10", 270-pound Kendrick Perkins, who was guarding Blake Griffin when Griffin showed us he was so powerful that he could blow our mind right in front of our face . The Clippers forward, like James, had a clear path to the basket when he took off. But Perkins quickly noticed and flew at Griffin like a high-speed train. It was Griffin's overcoming this sudden enormous obstacle that made his throw-down so impressive. 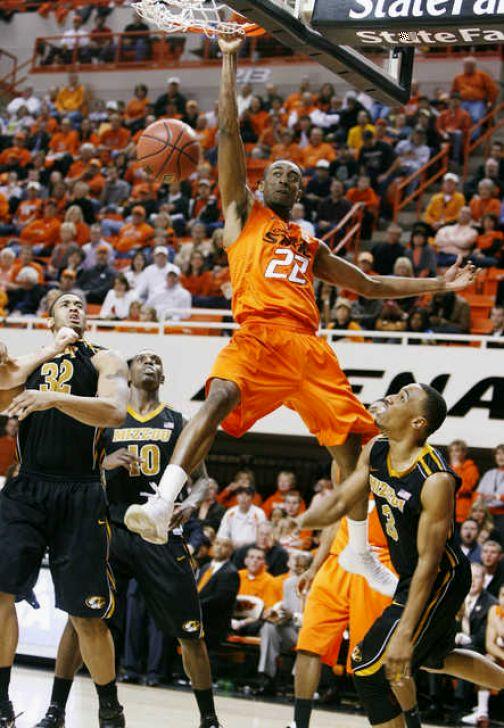 Photo: Markel Brown had one of the best college dunks of the year.

Photo: Markel Brown had one of the best college dunks of the year.

Anyone could have dunked from where he did with no one in the way. (Well, at least Blake Griffin could have easily.) It was the sudden realization that there was no way he could get to the basket and then the realization that he did , that made the highlight so, as James would say, "Wow!!" Maybe dunk contest participants should try dunking on each other . That would be a show.

Still in school, Markel Brown turned quite a few heads of his own with his finishes for similar reasons. His first alley-oop pass was thrown a bit high and behind Brown, just enough for viewers to write it off as a turnover, yet the Cowboys star somehow extended his arm enough to save it and finish with authority. In his second, the pass from Nash was on-point (how many times has that been said in basketball blogs?) and perhaps was the only possible option, as the Texas Tech defender had all but sealed off every possible passing angle. The Aggie, and us fans, never saw the backboard pass coming.

In fact, nobody saw any of these coming. And that fundamental element of surprise is why we watch sports. We can predict scores, we can predict awards and we can predict NFL games (for the most part). But we never really know what will happen until it does. What sets the best regular-season dunks apart from the best contest dunks is the surprise, the challenge and the forced creativity necessary to finish a play.