Why Blazers give blood

A man in a white coat leads junior Skylar Vanderwolf to the bulky blue reclining chairs on the stage. He takes what seems like an eternity to clean the needle and attach it to a bag. He puts a blood pressure cuff on her upper arm and cleans the inside of her elbow with a cold, antiseptic cloth. "Make a fist," the man says. She does. Then, he takes the needle, grabs her arm, and searches for a vein. Vanderwolf waits in anticipation. The man slides the needle and she winces from the slight pinch. For about 10 minutes, Vanderwolf lays on the chair, waiting. "It hurts. It's a little bit of pain, but it's worth it," she says. When Vanderwolf gets up to leave, the volunteers bid her off with a smile and a bright bandage around her arm. 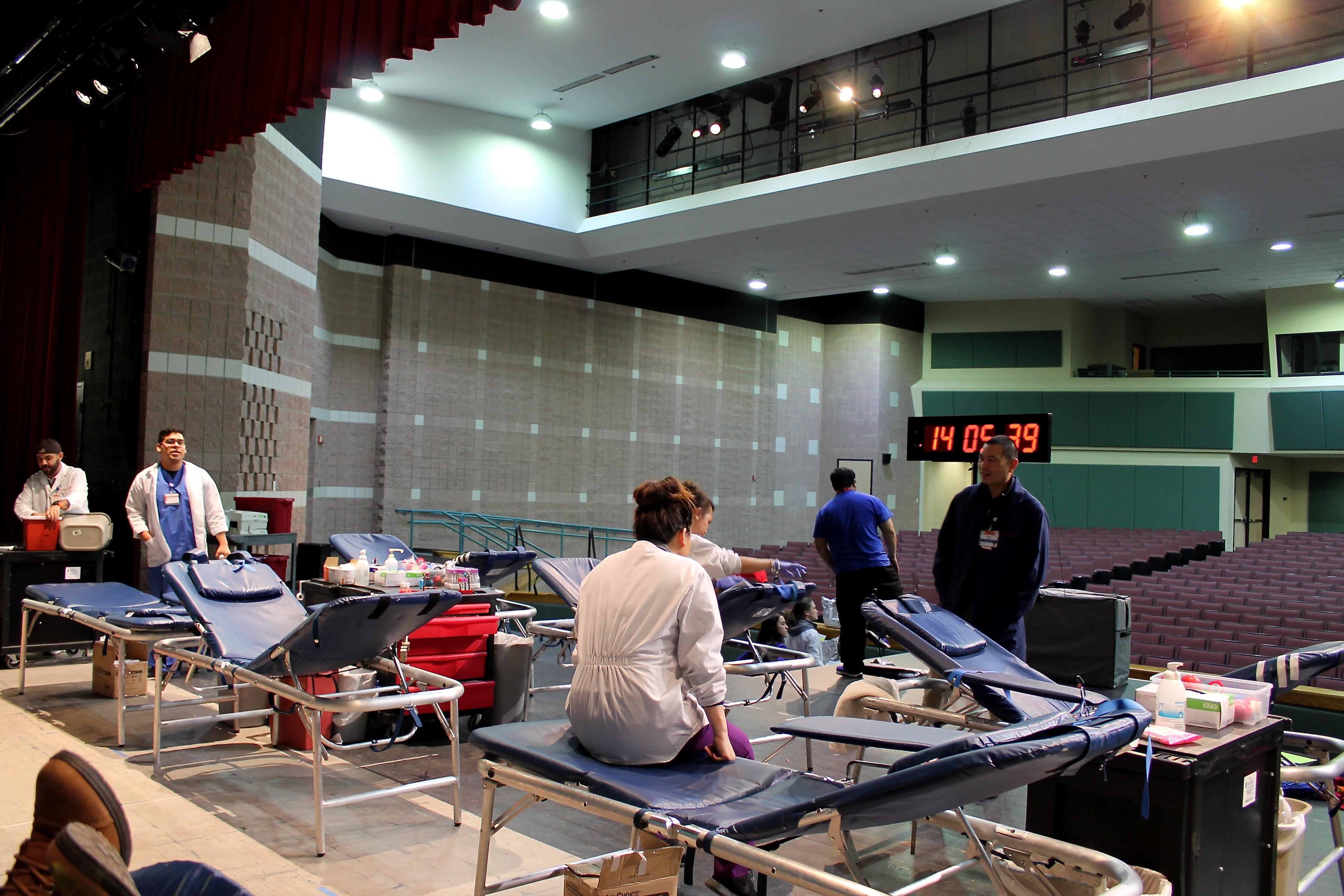 A smattering of students wear bright tie-dye t-shirts emblazoned with the words "Give me a hug, I give blood" float through the halls of Montgomery Blair. Along with Vanderwolf, 75 students gave blood during the winter blood drive. Junior Joelle Nwulu led the project as a member of the student government association (SGA), and had no trouble getting people to sign up for the event. "We promote it around Blair, but honestly, most people want to donate blood. They know people who weren't able to be helped, or even people who were helped in the past and they want to give their blood," Nwulu says. The snow days threatened the success of the event, but the SGA pulled through in the end. "Our time frame was shorter due to the snow, so we just had to work through all that. For the time that was given, it was a very successful drive and the companies are happy," Nwulu says proudly.

Last year, Gottlieb was not old enough to give blood and then this year, she jumped at the chance. "I was like ‘I'm 16, I'm old enough, let's do this!' I really wanted to help people," Gottlieb says enthusiastically. 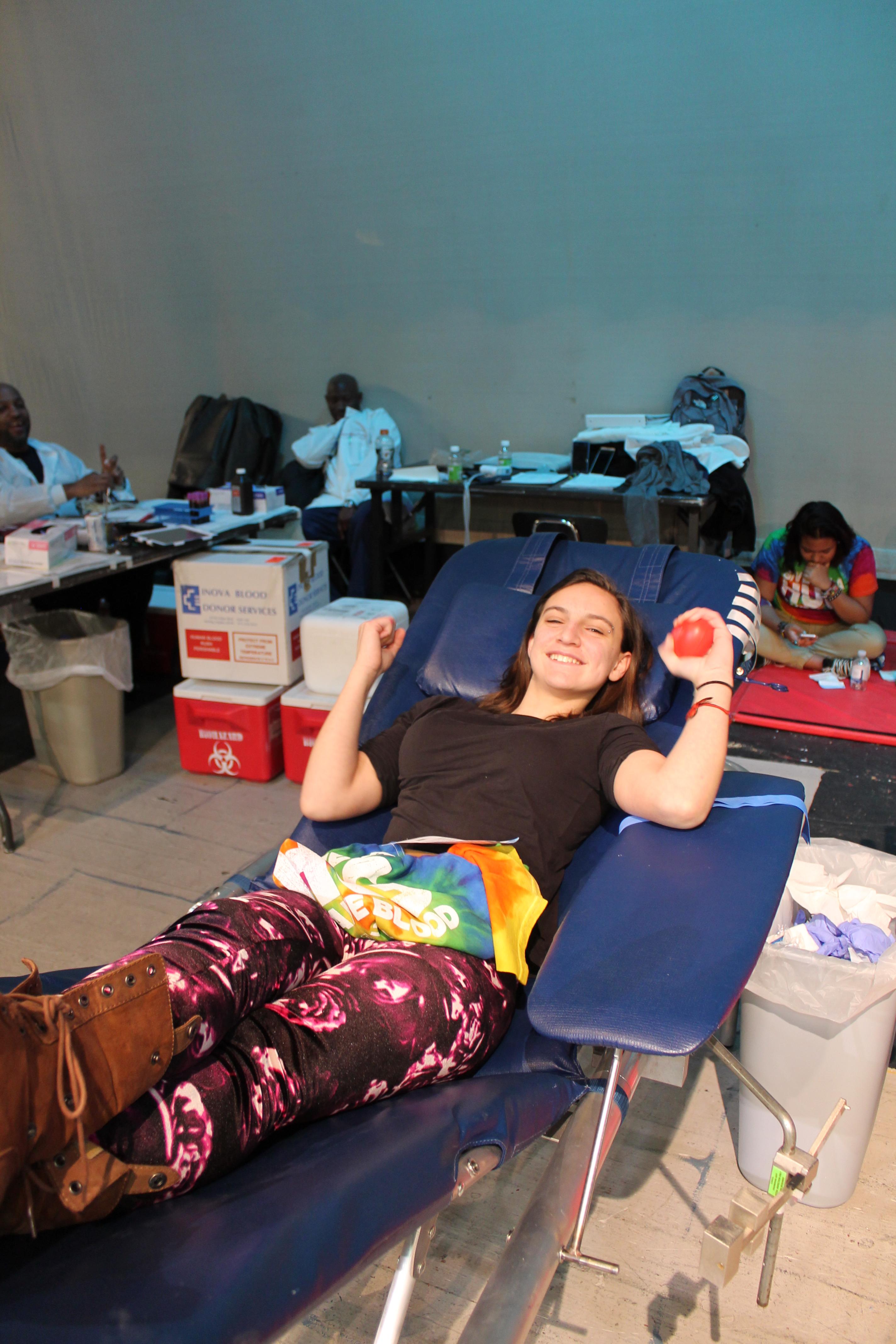 Photo: Junior Arielle Gottlieb was one of the last students of the winter blood drive to give blood.

Photo: Junior Arielle Gottlieb was one of the last students of the winter blood drive to give blood.

Blood transfusions are a major development in the medical world. One in three people will need blood in their lifetime. "Without blood, many lives would be lost. It's important to save lives. That's why I wanted to donate blood, that's why I did," Vanderwolf asserts.

For some Blazers, donating blood is about being part of the community. They feel that one pint of blood can do so much for someone else in the community. A couple days after Vanderwolf gave blood, she received an email from INOVA, the company in charge of the blood drives at Blair. The email revealed to Vanderwolf that her blood donation "gave another person a laugh, gave another person a smile and gave another person a chance to talk to a loved one." "The email just made me feel that I helped a person out. It made me feel like a piece of the puzzle, a chess piece in an entire game," Vanderwolf says passionately. It allowed Vanderwolf to step out of her own boundaries and give back to the community. "It's something bigger than me. It's a way that I can help someone other than myself. It's putting someone else's needs in front of mine," she explains.

Even without an exact knowledge of the necessity of blood, Gottlieb can be sure that her donation was helpful. "I imagine my donation was fairly helpful. It felt good to give. People were fairly nice. No, it wasn't pleasant to have a needle in my arm but it's worth it," Gottlieb says with a laugh.

And Blazers are ready to donate blood again. "The earliest I can give blood again is April 10 and it's on my to-do list. I'm ready to go and donate all I can," Gottlieb says emphatically. Starting at age 16, if a person donates blood every three months until the age of 76, that person would donate about 30 gallons of blood, and save dozens of lives.

By the end of the drive, Blair collected enough pints of blood to save 220 lives. "Now that feels good," Nwulu admits proudly.