Rebounding from half court

Marching into the gym, 10 girls line up across the red baseline of the court, their shoes squeaking against the polished wood floor as they move into position. Their arms are tensed in a running pose and their calves bulge slightly as they teeter forward. A lone word pierces the quiet expanse – "GO!" The girls let loose, sprinting to the other side of the gym with such force and speed it seems as though they are being urged forward by some repressed desire for success.

The difference is clear; this is not the lackadaisical team of yesteryears, but a formidable squad that is being shaped and chiseled into a disciplined girls' varsity basketball team beckoning state trophies. "Last year I don't think we put in the effort," says senior guard Kalisha Holmes. "This year we have been working a lot harder and have been inspired."

After initially transferring to Northwood last summer, Conley decided to move down University Boulevard. She joined Blair's English department as a ninth grade teacher shortly before the school year started. "When I heard about the varsity position at Blair, I was excited about the challenge of improving the program," says Conley. "I grew up in Silver Spring and enjoy teaching and coaching in my hometown."

In one season, Conley has transformed the formerly sinking girls' basketball team – from a group of high school girls whose "chemistry was out of whack" into "involved" student-athletes – says Holmes. While their current record might not reflect this turn around yet (the Blazers are currently 4-11 after going 3-20 last year), it is the change in attitude that is allowing the team to rebound. "She's not letting us accept defeat – something I've been doing as long as I've played for Blair," explains Holmes.

Wins have not been the only things missing for the Blazers in past years. Senior guard and co-captain Meghan Cadigan notes that players would often skip practice because they did not want to put in the effort. The problems began at the highest level, former coach (2003-2006) James Mogge acquiesces that he failed to motivate the team and communicate effectively, which he said, "had an impact on competitiveness and devotion. " Conley has laid out consequences for these types of truancies, forcing the girls to pick up slack or get off the squad. 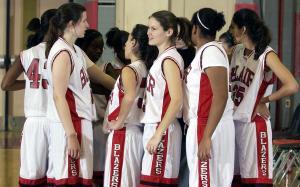 Photo: Team members get pumped up before returning to the court versus Kennedy High School.Photo courtesy of Silverlogue

Photo: Team members get pumped up before returning to the court versus Kennedy High School.Photo courtesy of Silverlogue

As head coach, Conley is determined to deliver intensity – demanding tough defense, hustle and perseverance on and off the court. She tries to play the athletes who work the hardest, not necessarily those who play the best according to Cadigan. "Basketball is a tough game," says Conley. "We are trying to master the things we can control such as athleticism and chemistry – it is impossible to control things such as height and innate talent." Instead of worrying about uncontrollable factors, Conley pushes her girls to get in shape and work hard, transforming practices into full cardio and body workouts.

On the first day of tryouts, the girls knew that the new sheriff in town would not settle for the routine, halfhearted practices of seasons past. "She's just so much more intense," says Holmes. "She's not afraid to punish us." Conley thrives off of hard work and dedication. "The most important transformation [for a team] is a change in attitude and discipline. We practice hard and each player is challenged to be a vital participant on the team," says Conley.

While the team has become more physically demanding, the girls have also been challenged in a new arena – friendship. Conley expresses the necessity of teamwork and especially growth off the court: "The off-season is where players are made," she says. In the months of the off-season, the girls strove to achieve unity and support under Conley's influence.

Shortly before the season began, the girls were offered an incredible and unique opportunity. Currie, the Mystics' forward guard and Conley's childhood teammate, met with the team to discuss the importance of working hard despite reasons to give up. Senior forward and co-captain Christina Mullen says Currie's words helped the team believe in themselves early in the season, getting them focused on the difficulties ahead.

As the season went on, the players continued to grow on and off the court through new bonding activities. Off the court, the squad has gathered at I-HOP numerous times to chat over pancakes and gone out to dinner after both tough defeats and exhilarating wins. On the hardwood floors, the team has begun doing a pre-game practice routine – referred to as "shoot arounds," inspired by coach Conley – getting the squad loosened up and ready to play. Cadigan believes that these team-building activities help get her mentally prepared for games. The statistics agree. The chemistry seems to have boosted morale as the score gap in losses has shrunk and the team has put up more points this season in 15 games than they did during the 23 games last season.

The increased confidence has led to a more emotionally stable and flexible squad. "At points when we've faced tough teams, they've gotten down on themselves, but they've really learned to bounce back," says Conley. "They are building optimism." This attitude has translated into dedication - at each practice, the girls get to the gym early and then quickly ease into their practice routine. Even when the coach is absent they transition from drill to drill – led by captains Mullen and Cadigan – not using the unsupervised time as an excuse to slack off. "It is important to me to teach them how much hard work, and dedication can pay off on and off the court," says Conley.

As the season winds down and the squad prepares for the playoffs, coach and players alike see a change in themselves and the program. "As a team we've come together, we now really know each other," says Holmes. Conley sternly reminds the girls that one cannot always define success by wins or losses. Her emphasis is on progress – something she hopes to provide over the years to come. Through team incentives, dedication, hard work and program outreach, Conley is revitalizing a girls' basketball program that has not won a trophy since 1987. Only time will tell whether her expertise and yearning for triumph will give Blair something to boast about – until then, let the basketballs fly, the calves ache and the team grow.