The good, bad and sass: who won the first presidential debate? 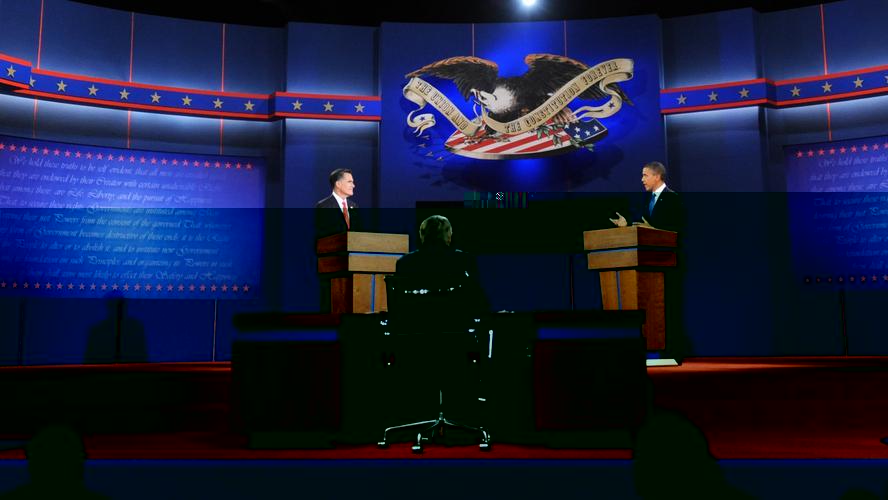 This election season's presidential debates kicked off between GOP nominee Mitt Romney and President Barack Obama at the University of Denver on Wednesday night. The event, moderated by PBS's Jim Lehrer, attracted over 50 million viewers across several television channels, news websites and YouTube. Prior to the debate, Obama supporters expected him to seal the election while Romney supporters hoped he would make a comeback after a few rocky weeks in the media.

It turns out that Romney came to the debate bursting with energy, whereas Obama, on the other hand, appeared tired and lacked the passion he showed four years ago. Though both candidates had strong points throughout the debate, they spent a lot of time talking in circles and each made several inaccurate statements. Neither side had a clear upper hand, and this leaves voters and viewers wondering what's next.

For those who haven't watched the debate, Silver Chips Online has compiled a list of the good, the bad and the just plain sassy. Here's a rundown of the Top 10 boldest statements of the night.

10) Romney: "Congratulations to you, Mr. President on your [20th anniversary]. I'm sure this is the most romantic place to be....here with me."

Generally described by many Americans as unrelatable, Romney pleasantly surprised us with his unexpected quip by showing us a side of his personality and a sense of humor. Romney scores with this one. 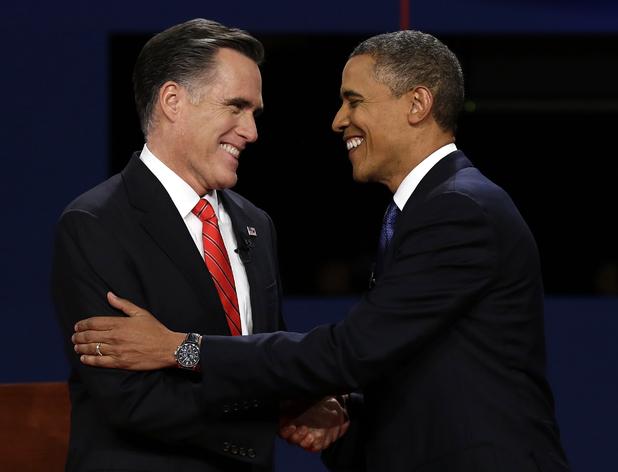 Photo: Governor Romney and President Obama take part in a friendly hand-shake before the debate.

Photo: Governor Romney and President Obama take part in a friendly hand-shake before the debate.

9) Romney: "I think it's, frankly, not moral for my generation to keep spending massively more than we take in, knowing those burdens are going to be passed on to the next generation and they're going to be paying the interest and the principal all their lives. And the amount of debt we're adding, at a trillion a year, is simply not moral."

This is probably the best thing Romney said all night because he acknowledged one of the greatest problems that our generation will face as we enter adulthood. Millennials (or Generation Y), and the following generations, will be expected to pay back the debt that previous generations accumulated as a result of what some call a "get-it-now, pay-for-it-later" mindset that has permeated the U.S. during the last half century.

8) Obama: "Under Governor Romney's definition...Donald Trump is a small business."

7) Obama: "The fact of the matter is, we used the same advisers and they say we have the same plan."

Among other complaints, Romney criticized Obamacare by saying that it costs more than traditional insurance, it would have to cut medicare to pay for it and a board would decide what kind of treatments people would get. Obama shot back, saying that Obamacare is essentially the same as the health care plan Romney enacted during his time as Governor of Massachusetts. 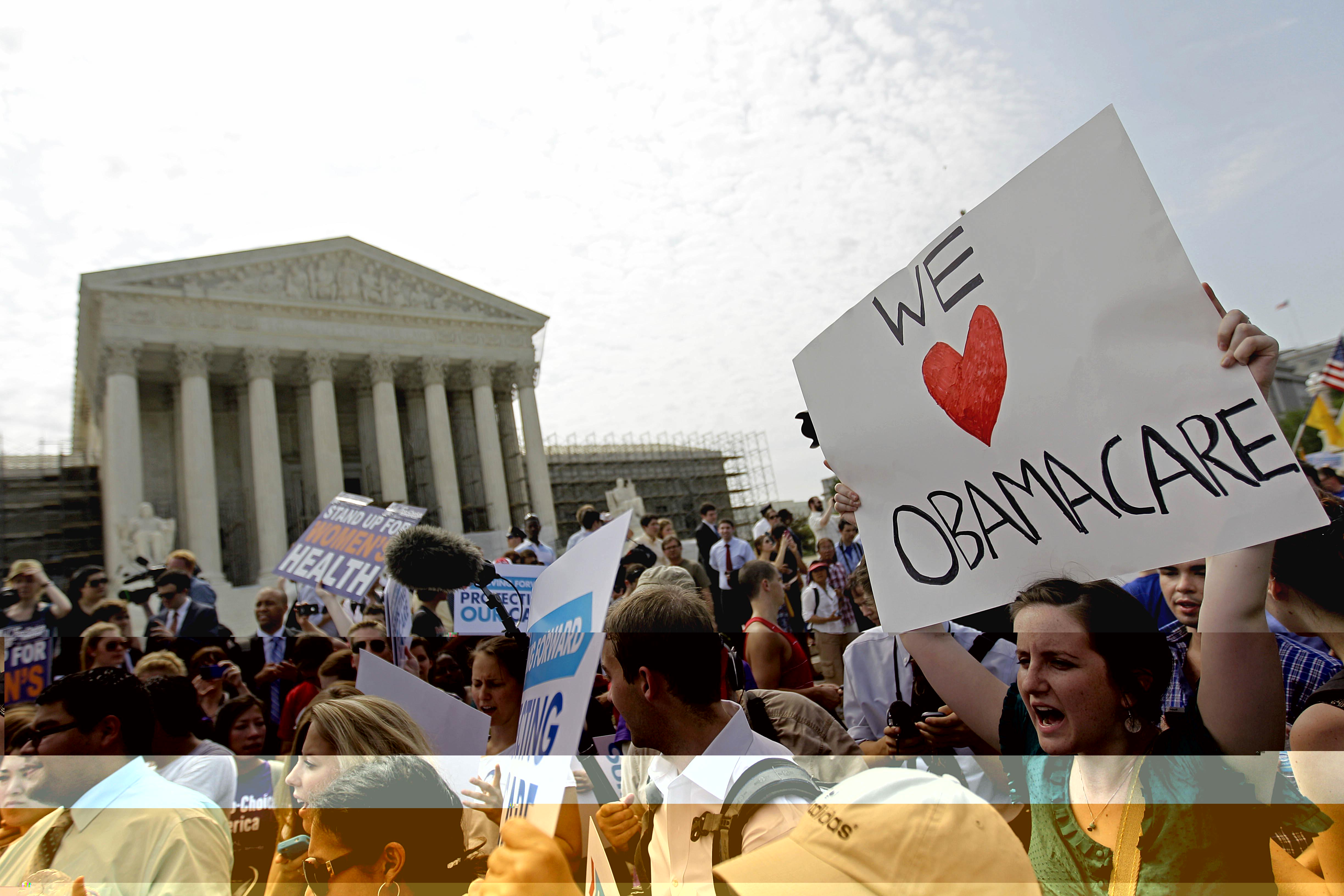 Photo: Obama and Romney have differing opinions about the Affordable Care Act.

Photo: Obama and Romney have differing opinions about the Affordable Care Act.

6) Obama: "I think Governor Romney's going to have a busy first day, because he's also going to repeal Obamacare, which will not be very popular among Democrats as you're sitting down with them."

In response to what efforts he will take towards bi-partisanship, Romney declared, "As president, I will sit on day one – actually, the day after I get elected – I'll sit down with leaders – the Democratic leaders, as well as Republican leaders." But, of course, he forgot to mention that he's been promising to repeal the Affordable Care Act the moment he gets into office, and so, Obama took care of that.

5) Romney: "I love great schools. Massachusetts – our schools are ranked number one of all 50 states. And the key to great schools: great teachers."

Romney claims Massachusetts schools were ranked number one in the country while he was Governor, which sent both current and former Blazers into a frenzy online. They cited articles that said Maryland public schools, for years, have been ranked number one by Education Week, which evaluates schools based on academic achievement, quality of teachers and school finances. According to Boston.com, the ranking Romney referred to, was actually the National Assessment of Educational Progress exam, which randomly tests students across the country. But regardless of which ranking you look at, Massachusetts already had strong schools before Romney even became governor.

4) Obama: "Governor Romney's central economic plan calls for a $5 trillion tax cut — on top of the extension of the Bush tax cuts."

A plan that calls for a $5 trillion tax cut sounds absolutely ludicrous, given that the U.S. has accumulated $16 trillion in debt, and makes Obama look good. However, he neglected to mention that the actual figures for Romney's plan, when summed up, will only be $480 billion per year, according to a Tax Policy Center estimate for 2015. So, just how did Obama get the number, five trillion, then?

By multiplying $480 billion by 10 years and rounding up. 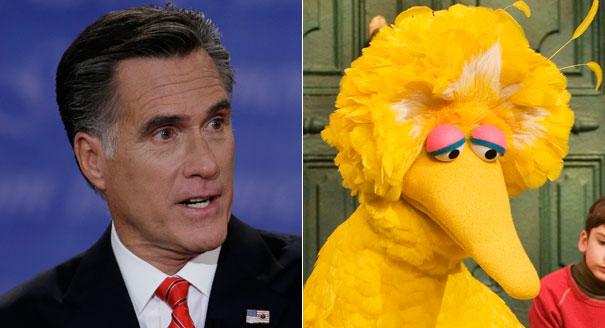 Romney was explaining that he would cut anything from the budget in which the U.S would have to borrow money from China to pay for when he let this comment slip out. That was the most awkward moment of the debate since Lehrer is a longtime anchor for the Public Broadcasting Service (PBS). The real issue, however, was the insult to Sesame Street's Big Bird, one of America's iconic characters. This sent Twitter into frenzy and by the end of the debate, there was already a "Big Bird for President" Facebook page. In a statement to Politico, PBS CEO Paula Kerger expressed her shock that Romney would cut "America's biggest classroom." Someone should remind Romney to pick on someone his own size.

2) Romney: "The president said he'd cut the deficit in half. Unfortunately, he doubled it. Trillion-dollar deficits for the last four years."

Romney is correct about Obama's failure to cut the deficit in half; that just hasn't happened. However, his claim that Obama doubled it is just inaccurate because he inherited much of it from his predecessor back in 2008-09. By the time Obama took office in January of 2009, the Congressional Budget Office (CBO) already predicted that the government would end the fiscal year with a $1.2 trillion deficit.

--
What was your favorite moment? And who do you think won the debate? Share your thoughts below or vote in our poll.

To view the entire debate, click here. The next debate, between Vice President Joe Biden and Congressman Paul Ryan, will take place on Thursday, Oct. 11, at 9 p.m. Eastern Time.