The Blazer is one of the more cryptic mascots in MCPS. Einstein's Titan or Kennedy's Cavalier, just to name a few, are pretty simple to figure out, and even reuse the logos of other prominent sports teams like the Tennessee Titans and the Cleveland Cavaliers. At Blair, different students have different ideas of what the Blazer is. In fact, there are different Blazers all over Blair. 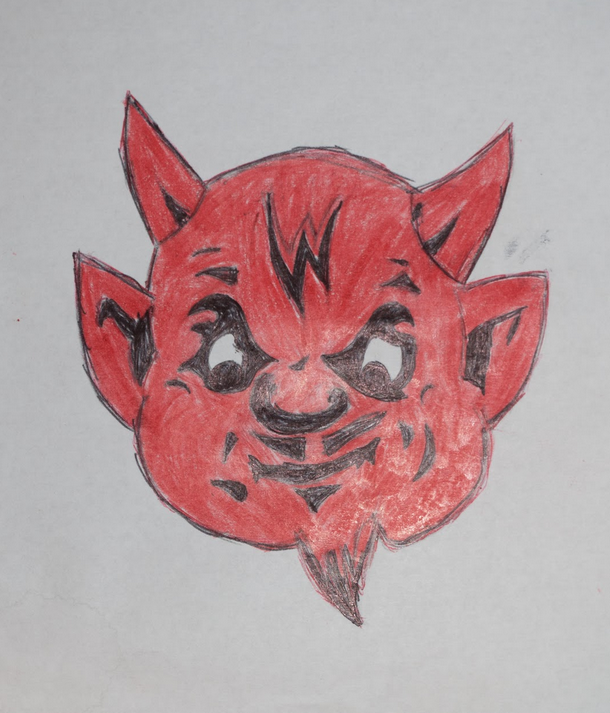 Photo: This Blazer is featured on the agenda books and athletic apparel.

Photo: This Blazer is featured on the agenda books and athletic apparel.

The official Blazer, which can be seen on students' agenda books, Blair wear, and various sports jerseys, shows only the mascot's face. The sharp horns and pointed ears are decidedly devilish, while the goatee, small tuft of hair, and round face are kind of like the goatman or satyr from Greek mythology. Its small mustache and smirk make it look more human than it otherwise would. According to junior Shesh Batni, this incarnation of the Blazer is the best simply because it is most common. "I don't know why, but I like the one with the goatee," explains Batni. "I guess I just see it the most frequently." 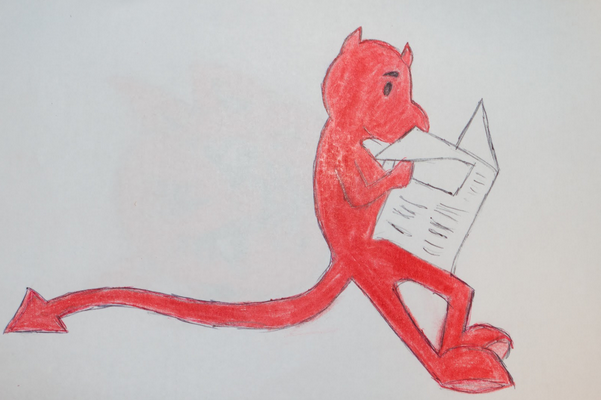 Another major Blazer is the one on the banner of Silver Chips Online. This simple cartoon takes a common approach, likening the Blazer to a devil. This particular interpretation contrasts the pointiness of the devil's horns with a rounded nose and feet, but the real focal point is the long pointed tail. It's also reading a newspaper, but that's more of an homage to the publication than to the mascot. 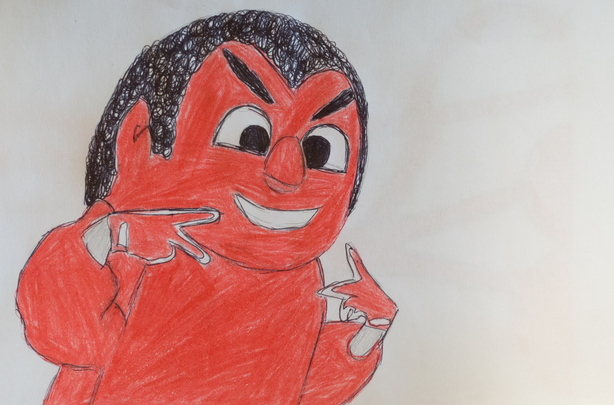 Photo: The school's mascot costume has been worn by numerous students over the years.

Photo: The school's mascot costume has been worn by numerous students over the years.

Perhaps the most visible Blazer is the school's mascot, which makes appearances at sporting events, pep rallies, and other major events. This take is somewhat limited by the moth-bitten nature of the suit, but it definitely goes in a unique angle. The hairline and pointed ears are much akin to Dracula or some other vampire, but with red skin. 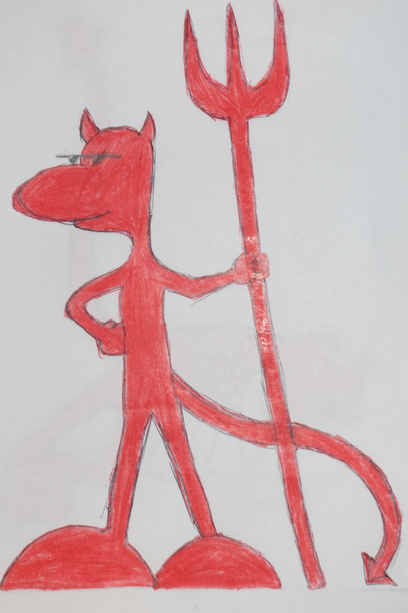 Photo: This Blazer cartoon shows up on signs throughout the school.

Photo: This Blazer cartoon shows up on signs throughout the school.

This Blazer can be seen in the hallways on signs advertising BLISS tutoring and other school-related functions. He's by far the skinniest of the Blazers, and also the only one with a weapon, wielding a giant, menacing pitchfork. His feet are like giant suction cups, and his nose is the same size as the rest of his head. Aside from those small inconsistencies, it's a lot like the devilish caricature from the Silver Chips banner. 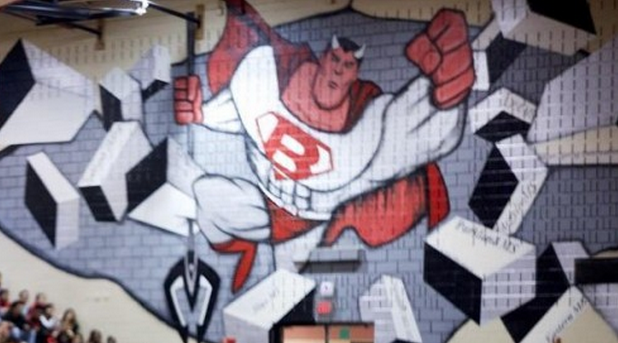 Photo: The Blazer in the gym looks more like a superhero than a devil.

Photo: The Blazer in the gym looks more like a superhero than a devil.

An especially popular Blazer is the superhero-esque one breaking through the gym wall. With an impressive physique, an imposing trident, and a giant "B" on his chest, this figure is unlike any other Blazer. According to senior Christopher Isaac, the strength of this mural is its best feature. "I like my mans in the gym with the sideways sixpack," Isaac says, making reference to the mural's poorly drawn abdomen. "Do you know how hard it takes to get one of those?" 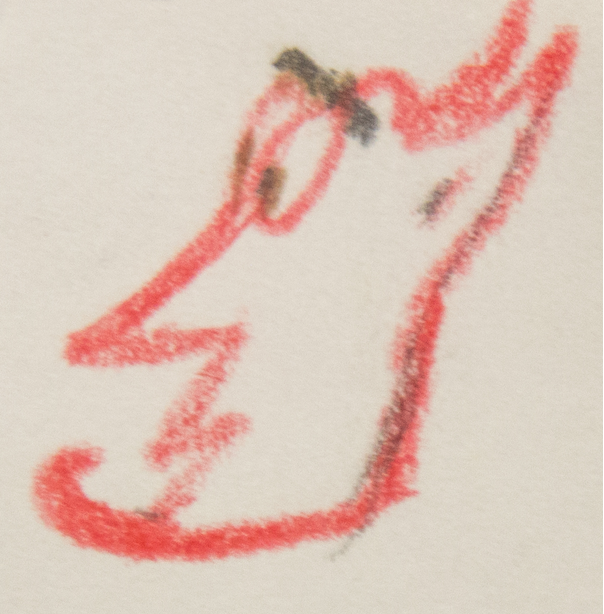 Photo: Tram's Blazer has especially pointy ears and a goatee.

Photo: Tram's Blazer has especially pointy ears and a goatee.

Those are all of the biggest school-sponsored depictions of the Blazer, but students have their own ideas about what the mascot looks like. This sketch by Blair senior art student Judy Tram is definitely based on the devil, with a large pointy nose, ears, lip, and goatee. The whole thing is sort of pointing to the left, and the exaggerated eyes and brow draw attention to whatever it is that it's looking at. Tram's idea for her design came from a childhood TV show. "My inspiration was this character from the Powerpuff Girls, who's like a really point devil," explains Tram, laughing. 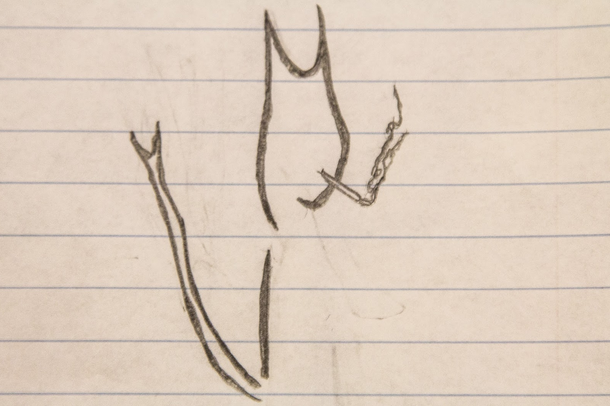 Photo: This Blazer by Maske is an homage to the blazin' element of the school's mascot.

Photo: This Blazer by Maske is an homage to the blazin' element of the school's mascot.

This drawing by senior Claire Maske is probably the toughest of the bunch, and makes a reference to the joke that the Blazer describes the practice of smoking, or blazing, illicit substances. It's definitely devilish, with a characteristic long tail, but is also pretty abstract, only showing the outline of one side. One thing's for sure, you don't want to run into this Blazer in a dark alleyway late at night. According to Maske, this unique design stems from the fiery nature of the Blazer. "The way I think of the Blazer is the blaze part, and this is how I personify that idea," Maske says. 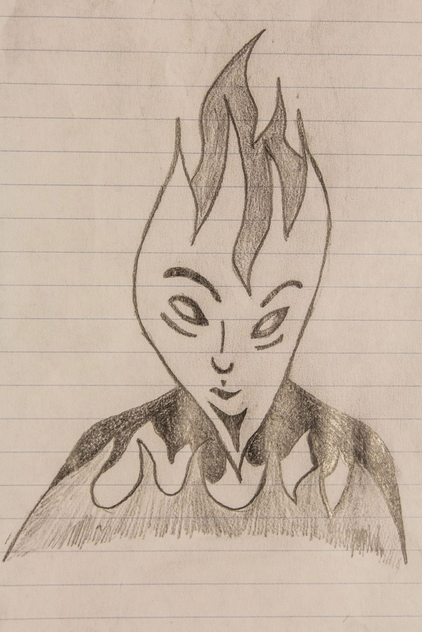 Photo: Emsfeld's drawing is especially unique, and shows the Blazer made out of flames.

Photo: Emsfeld's drawing is especially unique, and shows the Blazer made out of flames.

Senior Isabel Emsfeld, who spends the second half of her day studying art at the Visual Arts Center (VAC) at Einstein, has a particularly unique take on the Blazer. She focused less on the devil imagery and more on the blaze, making the entire thing out of flames. Its head looks like it belongs atop a birthday candle, except for the goatee, which appears here just like in several of the other drawings. According to Emsfeld, flames are the first thing that comes to mind when thinking about the Blazer. "When I first think of Blazer, I think of the one with the goatee because that's on all of the cross country jerseys, but I wanted to focus more on the flames in my drawing," Emsfeld explains. 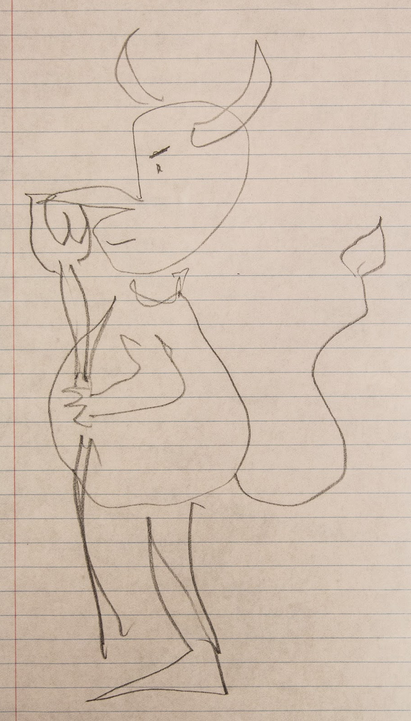 Photo: This Blazer by Yonkos is chubbier than most.

Photo: This Blazer by Yonkos is chubbier than most.

The final drawing comes from senior VAC student Nick Yonkos, who shows the Blazer is a portly devil. He features long, pointed horns, a thin tail, and wields a short pitchfork. This Blazer is probably the fattest of the bunch, sporting a portly paunch that almost gets in the way of the weapon he holds.

Clearly, the "Blazer" image can be taken into a myriad of directions. Be it a devil, vampire, flame-boy or thinly-veiled drug reference, everyone has their own thoughts about what the Blazer should look like. If you disagree with all of the above illustrations, you can make up your own and share it with us on Twitter at @mbhsSCO.