"It's the strong smell of deja-vu," NSL and AP comparative government teacher Peter Cirincione says. He isn't talking about the lunch room or gym locker rooms, he's talking about the distinct smell of the plastic on Blair's back staircases. It's Cirincione's first year as a teacher at Blair, but his 5th year as a member of the Blair community. 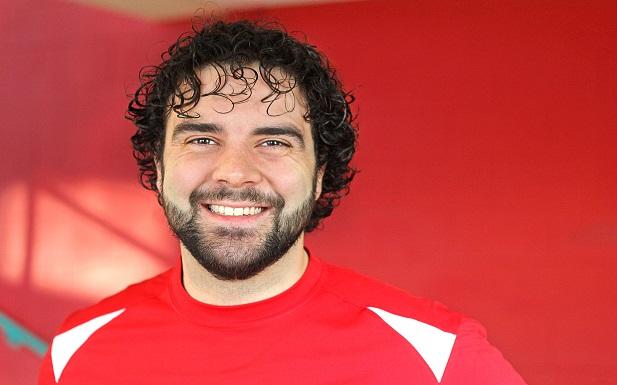 Cirincione graduated from Blair in 2002. He was in the Magnet Program, but although he enjoyed math and science, he didn't identify with the subjects as much as his peers did. "They got internships at places like NIH or did projects about cancer research, but I just wanted to do a project more about humans," he says. He ended up creating a mentoring program between Blair students and 3rd and 4th graders at local elementary schools. One of the reasons that he became a teacher was the human connection made during the project. "It showed me how powerful one-on-one relationships can be," he says, "which made me want to be a teacher."

Cirincione enjoyed his experience as a student at Blair. "Not all teachers are teachers because they really loved school, but I did," he says. During his time at Blair, he was on Students for Global Responsibility, played for Blair's first lacrosse team and participated in the floor hockey league. He relished being at a school that had so many different opportunities. "I loved being at a place that was so diverse that had so many different options, even if I couldn't do them all," he says. He enjoyed seeing his friends and fellow classmates taking advantage of the variety that Blair had to offer. "People were passionate about different things," he remembers.

After he graduated from Blair, he went on to major in educational studies and history at Brown University. At Brown, he continued his lacrosse career as captain of the university's club team. During his time at college, he experienced what he describes as one of the most absurd jobs. "Every day, I would go up before [the field hockey's team's] practices and games to soak the artificial turf in thousands of gallons of water," he says. After he got his degree, he went on to teach World Studies and Journalism for five years in California. However, he wanted to return to Takoma Park.

The Blair faculty was a great part of high school for Cirincione. "There were teachers that encouraged me to follow my passions and work on projects that appealed to me," he emphasizes. One of the teachers who had such an impact on Cirincione was David Swaney, who taught Cirincione and the person who previously held his teaching position. He gave Cirincione a recommendation for the job. "When I was looking for a job in Montgomery County, I contacted Mr. Swaney and he gave me very good recommendations, which absolutely helped me get the job," Cirincione explains.

Currently, Cirincione is teaching NSL and AP Comparative Government. His favorite thing about teaching is seeing how his subjects apply directly to students' lives. "We study how the world works and how can we can affect it," he says. Teaching government so close to the nation's capital is a unique experience within itself. "Unlike students here, students in California were more apathetic to government because they didn't see that they have any role in it," he explains.

Cirincione is left-handed, vegetarian and partially color blind. Cirincione also loves the outdoors. "I love to play soccer and ultimate Frisbee, hiking and camping," he lists. He's also recently gotten into gardening. "I love to plant succulent plants which are pretty weird-looking and have a bit more personality than flowers," he jokes. In August, Cirincione is getting married on a mountaintop in Massachusetts.

Cirincione's experience as a Blazer shaped the rest of his life. He loved it so much that he returned 12 years later to take on a different role. No longer the guided but the guide, he looks forward to continuing his relationship with Blair as a mentor.